Winter is Growing a Little Too Icy Towards Us 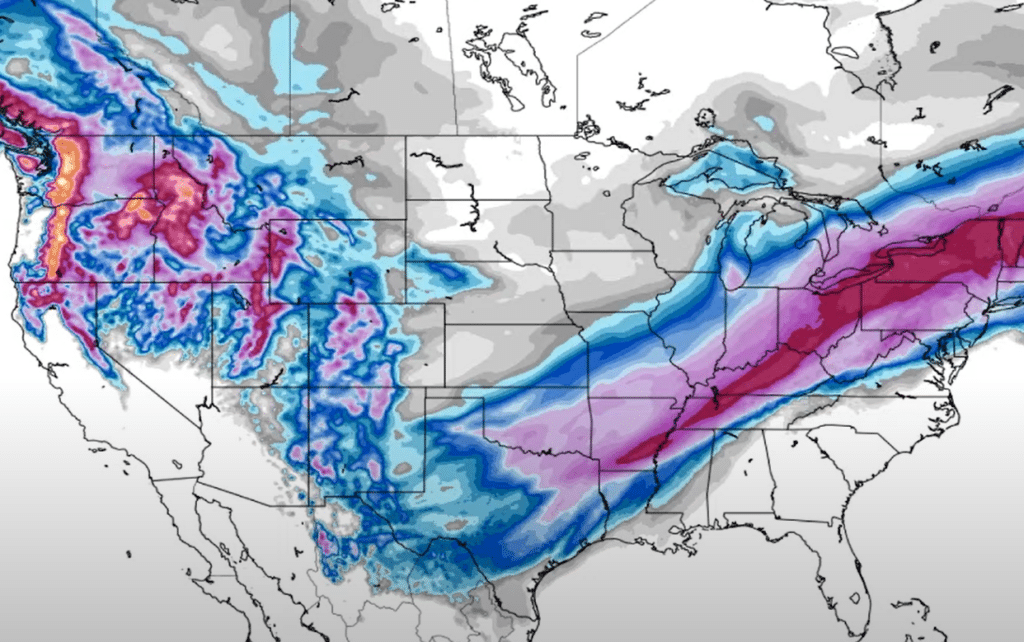 We are now entering day six of this wintry-mix, crap-storm that has been hovering over our area recently. There is good news in all of this. One – it wasn’t a February thaw, blow-torch pattern that warmed things up and challenged the base depths. Two – the last, really important holiday weekend is ending later today and it came and went with record or near-record crowds attending most every ski resort in the region.

In addition to today being day six of this icy, wintry-mix pattern – it is also ending our consecutive day streak of having natural snow on the ground here in the High Country of Western North Carolina.  Today would have been day 52 with natural snow on the ground and while there ARE still a few spots where snow plows pushed up some snow…for the most part it is gone.

That is NOT the case up in West Virginia where David Lesher of Canaan Valley Weather is showing 19″ of snow still on the ground. David snaps a photo outside his window each morning and things are still crazy, snowy up that way. 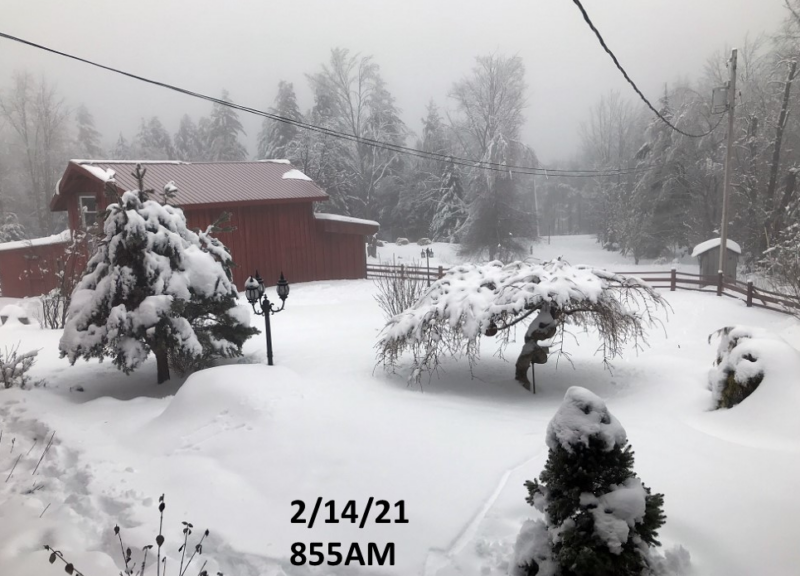 In the same, six day period that we’ve seen rainy conditions here in the Western NC, Canaan Valley has reported 9″ of snow, and Wisp Resort has seen over a foot.

Plenty of Snow on the Slopes!

To be clear – and so as not to alarm anyone – every ski resort in the region is reporting great base depths right now, despite the 1″ or so of rain that has fallen across North Carolina ski resorts over the last week.

Base depths are still looking awesome across our entire coverage area with most resorts reporting three-to-five FEET of snow for minimums. Appalachian Ski Mountain leads the way in terms of maximum base being reported in the 7.5 foot range.

The important thing to know is that the slopes are in great shape AND Cold and more snow is in the forecast for most of the region. There is a chance that this NEXT WEEK will be very similar to what this LAST WEEK has looked like as there seems to be equal chances of wintry mix and more icy conditions, than SNOW. However, we should also see some great, snow-making temperatures coming in mid-week and next weekend is looking VERY cold with lows in the single digits to 11° Friday night.

So brace yourself for more cold and wintry conditions!

If you are planning a trip up today, this week or next weekend, remember – there’s no such thing as bad weather, just bad gear! (This is a shameless steal that I’ve used many times that Snowshoe Mountain tends to share during inclement weather patterns. It is so true though.)

That is also a shameless plug for our independent ski shops in the area. Stop in and grab the proper gear and you’ll enjoy whatever ma nature throws your way!

I keep getting intel in small snippets from different resorts that I’ve never seen before. Case in point:

On Sunday evening Massanutten Resort shared that they have a couple of call centers that handle guest call-ins. They mentioned that ONE of them is receiving close to 10,000 calls per week, working very hard to help guests and owners have a great vacation experience.

Another sign of crazy times is that even Sapphire Valley is SOLD OUT for Monday day sessions and equipment rentals.

My wife and I drove over to Banner Elk SUNDAY afternoon – rather early – and could not get a table at our favorite restaurant. This season, we have actually resorted to driving an hour to Johnson City to dine, instead of waiting around for two hours to dine locally.

I ran across something on Sunday evening that caught my attention. A local weather prognosticator (not named Brad Panovich) forecasted this season would deliver 20% less snow than the 20 year average AND that “we would have a lot of trouble seeing cold for long periods this winter.”

They could not have missed the forecast any worse. Since mid-December, we’ve seen nothing BUT cold weather and snowy – if not wintry – patterns and it looks like more of the same for at least the next week or so.

Of course, MANY weather experts missed on the 2020-2021 Winter Forecast. The only reason I am even mentioning this one is because I also noticed that they are STILL reporting errant Sugar Mountain snowfall for last season – while at the same time reporting Beech Mountain saw 21″ LESS SNOW. It would take a “zombie apocalypse” of epic proportions for that to even be possible as Beech Mountain always has a bit more snow for nearly every snow event.

The only reason I am sharing that tidbit (again) is that we are still seeing reporting that Sugar Mountain received 66″ of snowfall last season AND at the same time they are reporting that Beech Mountain only had 45″. (Talk about being bought to report the company message…)

It has been an awesome winter thus far, with Sugar and Beech Mountain already right at their normal, average snowfall for an entire season. Beech has seen 78″ on this season and they get 80″ annually (the 20 year average). It has been good to see Sugar’s own reporting being pretty accurate this winter as well. (Just have NO CLUE what happened last year.)

That’s it for me today. I’ll turn the FirsTrax reins back over to Matt Laws for the rest of the week and see what he can do about improving this wintry forecast. Hopefully when I report back for duty on Saturday we’ll see some colder and snowier conditions.

Thanks for all the comments and suggestions about a potential PodCast in our future here at SkiSoutheast. Things are in the planning stages and we may have something to report soon.

In the meantime, here are some image shares for today. 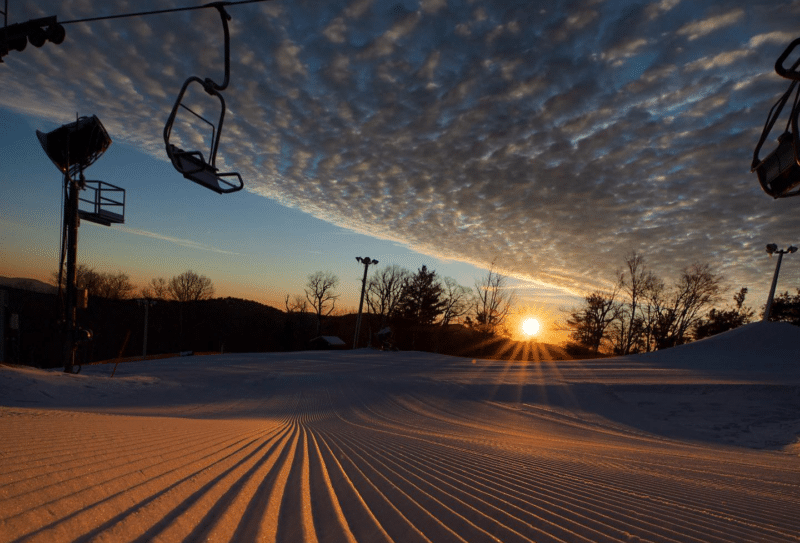 Awesome photo posted by Appalachian Ski Mountain on Sunday morning as there was a break in the clouds before the misty drizzle reentered. Click to Enlarge! 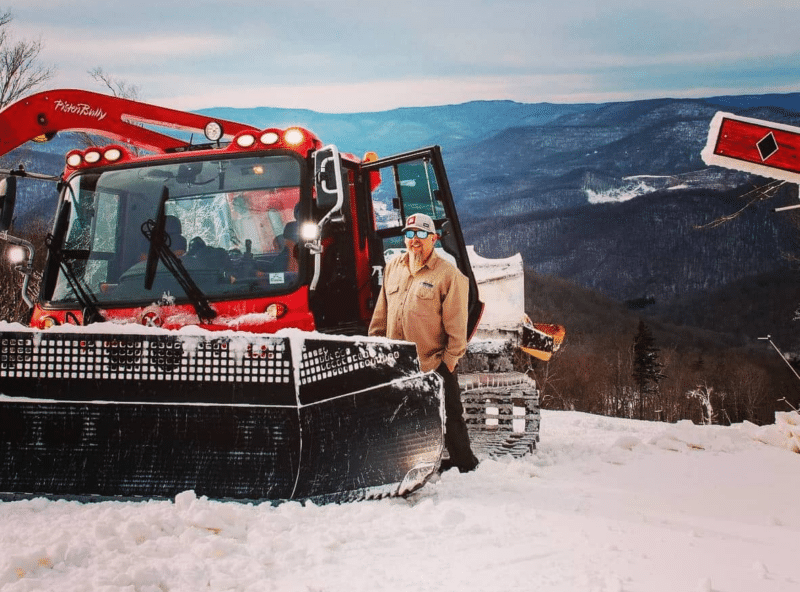 This photo from Snowshoe of Ken Gaitor loving his groomer on Valentine’s Day made the rounds on Social Media. Click to Enlarge! 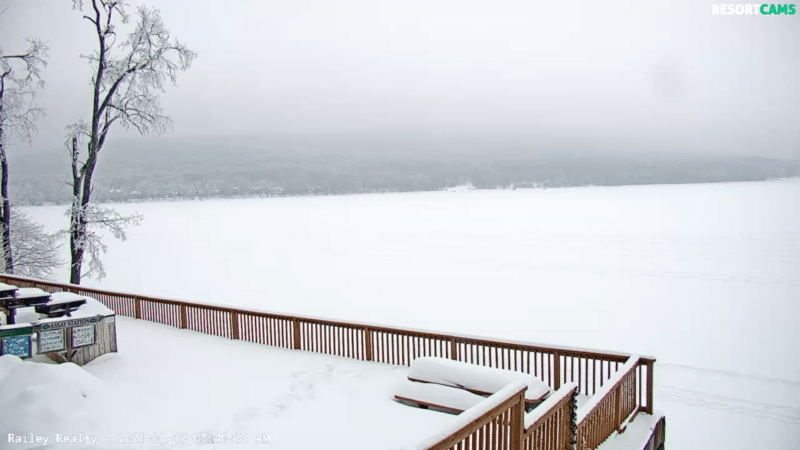 We’ve shared JUST how much snowier it is into West Virginia and Maryland over the last few days. This photo of Wisp Resort from this morning proves that. Click to Enlarge! 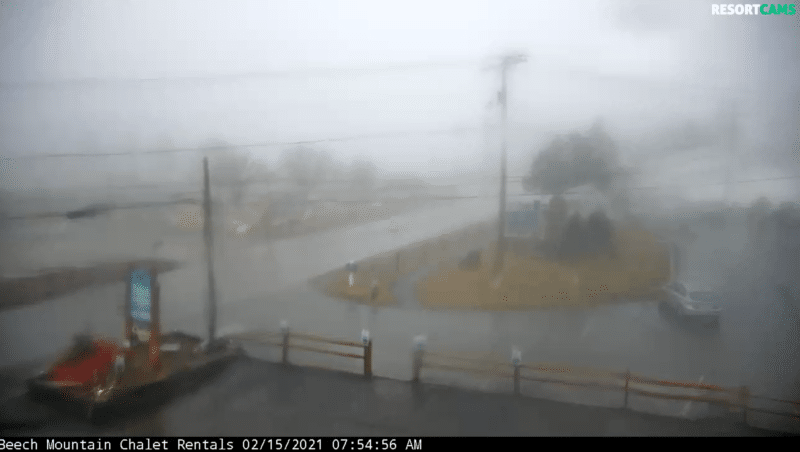 By comparison…this is this morning on a wet Beech Mountain Parkway! Click to Enlarge! 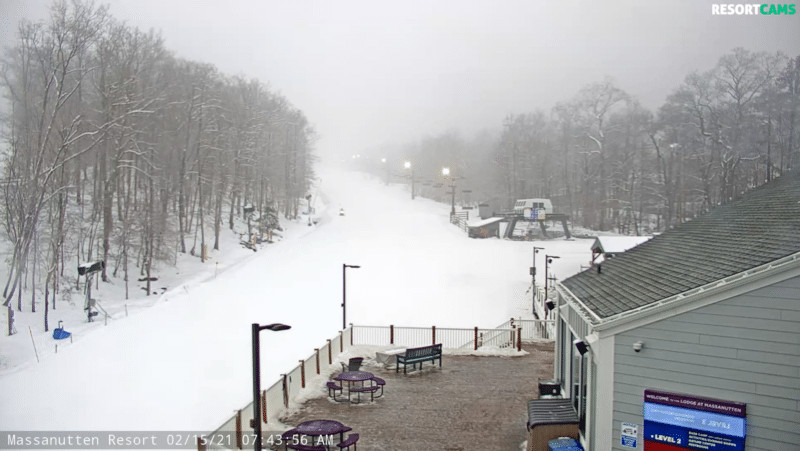 It’s icy-er and frosty looking at Massanutten Resort this morning! Click to Enlarge!