Winter and Snowmaking has Returned!

Winter has returned and the resorts are taking advantage.

Conditions are much improved across the region as every resort in our coverage area was able to take advantage of last night’s cold weather and crank up the snowmaking operations. Several locations will be able to make snow throughout the day setting us up for prime conditions for MLK Weekend.

The mountain op crews started working their magic just after lunch on Thursday, and the impact has been immediate. While temperatures will be borderline for snowmaking in the southern part of the region tonight, things take a nosedive on Saturday night to kick off what should be a lengthy snowmaking window – potentially three to four days of around the clock snowmaking conditions.

After this past week’s weather, it is music to our ears.

Mike gave us a video tour last night as the snowmaking got kicked in high gear.

The Snowguns are Blasting the Slopes!

Just in time for MLK Weekend, the weather has turned colder and the snowmaking crews have gone to work at many of the ski resorts. All should get in on the fun overnight and even more so as we get into the midst of the weekend.

Saturday will bring mixed-bag weather-wise as we could see rain, freezing rain, wintry mix, and even some snow depending on where you are at, but the rest of the weekend and early next week looks fantastic for skiing.

Mike took a deeper look a the weather forecast this morning and you can check it out here. Short story- there could be some light snow over the weekend with totals ranging from a dusting to just around four inches depending on your location.

For complete details on today’s conditions, be sure to visit our Snow Reports page. Here is a quick snapshot of conditions as we head into the holiday weekend. 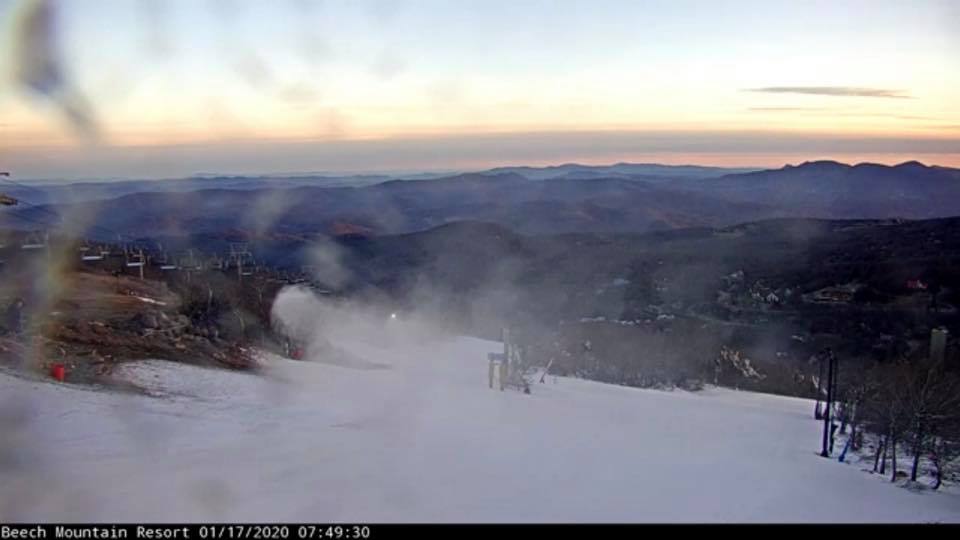 Sunrise and snowmaking – a perfect combination on this Friday.

App Ski Mountain (23°) – App is reopening at noon today as they focus on maximizing snowmaking efforts and open as much terrain as possible. They are expecting to have eight slopes and five lifts operating at first chair with a 12-28” base with a groomed surface.

Their offerings today could certainly change as they get closer to the noon offering.

Beech Mountain (18°) – Beech is heading into the holiday weekend with an 18-30” base with seven slopes that will be serviced by five lifts. They have a packed powder surface and will have snowmaking operating as long as possible today.

Cataloochee (32°) – A night of snowmaking has helped Cataloochee up their base to 22-42” with a packed powder surface. They are playing on seven slopes with five lifts in service.

Tubing is currently closed but they have resumed snowmaking at Tube World.

Sugar Mountain (24°) – Sugar is looking much improved this morning as they are featuring manmade powder and frozen granular surface on a 12-36” base. They are skiing and riding on eight slopes with four lifts operating.

Wolf Ridge (27°) – The Wolf is back for day and night sessions after being closed most of the week. They are playing on a 12-22” base with a groomed surface with four slopes available for play with two lifts operating.

West Virginia
Canaan Valley (17°) – Canaan saw some light natural snowfall overnight to help set the winter mood as we head into the holiday weekend. They have a frozen granular surface with a 15-30” base. Canaan is skiing and riding on 13 slopes with two lifts in service.

Snowshoe (9°) – The Mountain op crews at 4848’ kicked snowmaking off yesterday afternoon and have been hard at it overnight. They have a 40” base with groomed variable conditions. Playing on 40 trails with 12 lifts operating.

Snowshoe – along with Canaan Valley, Winterplace and Wisp – may be able to make snow throughout the day and into Saturday morning making conditions pretty sweet.

Check out the scene from Snowshoe last night.

Winterplace (19°) – Things are looking great in Ghent as they are playing on six slopes with four lifts this morning. They have a 14-30” base with a variable surface.

Virginia
Bryce (26°) – Bryce was able to make snow to refresh the slopes overnight. They haven’t updated their website in a couple of days, but it appears they are playing on six slopes with one lift operating. They have a 30” base with a loose granular surface.

Massanutten (24°) – The ‘Nut is offering four slopes today with no intermediate terrain available today. They have an 18” base with groomed conditions.

Wintergreen (16°) – Wintergreen is playing on a 12” base with a groomed surface as we kick off the weekend. They currently have four slopes and two lifts operating, but I fully expect that count to rise over the next couple of days. 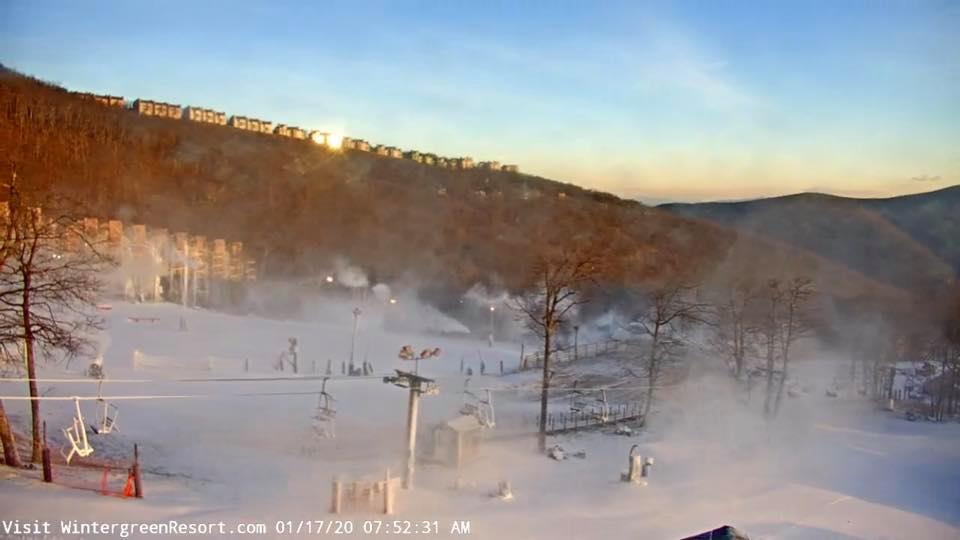 Wintergreen was looking a glow with this morning’s sunrise.

Maryland
Wisp (22°) – After receiving a light dusting of natural snow overnight to help get in the winter mood, Wisp is playing on 11 slopes with six lifts operating. They have a groomed surface with a 17” base.

Things are looking really good this morning on the slopes with a really good weather day to go along with it.

Of note, we do have a couple of updates on the three resorts that still have suspended skiing and snowboarding operations.

Ski Sapphire – They were able to make some snow. Initially, they had announced a reopening day of next weekend, but they will reopen as soon as conditions allow for snowmaking.

Ober Gatlinburg – They were able to get snowmaking cranked up last night and will continue as long as temperatures allow. They haven’t announced a reopening day, but a weekend reopening isn’t out of the question.

Tubing is open, but it is the hottest ticket in town this weekend as they are sold out on Saturday and Sunday.

The Omni Homestead – Snowmaking is going at full blast this morning. They have announced they are planning on reopening on Thursday, Jan. 23.

It is going to be a great weekend and if you are on the slopes be sure to send us your trip reports and photos.

Hey – it’s not too late to enter for our Ski Getaway giveaway over on Facebook as you have until noonish to enter. We will also be posting updates throughout the weekend.

Previous Post
Light Snow to Perhaps 4″ at Some Resort Mountain Locations of the Southeast & mid-Atlantic
Next Post
Ski South Forecast Update for MLK Weekend: The cold is back baby!