WILL WE EVER SEE A NORMAL WINTER AGAIN? OF COURSE WE WILL… 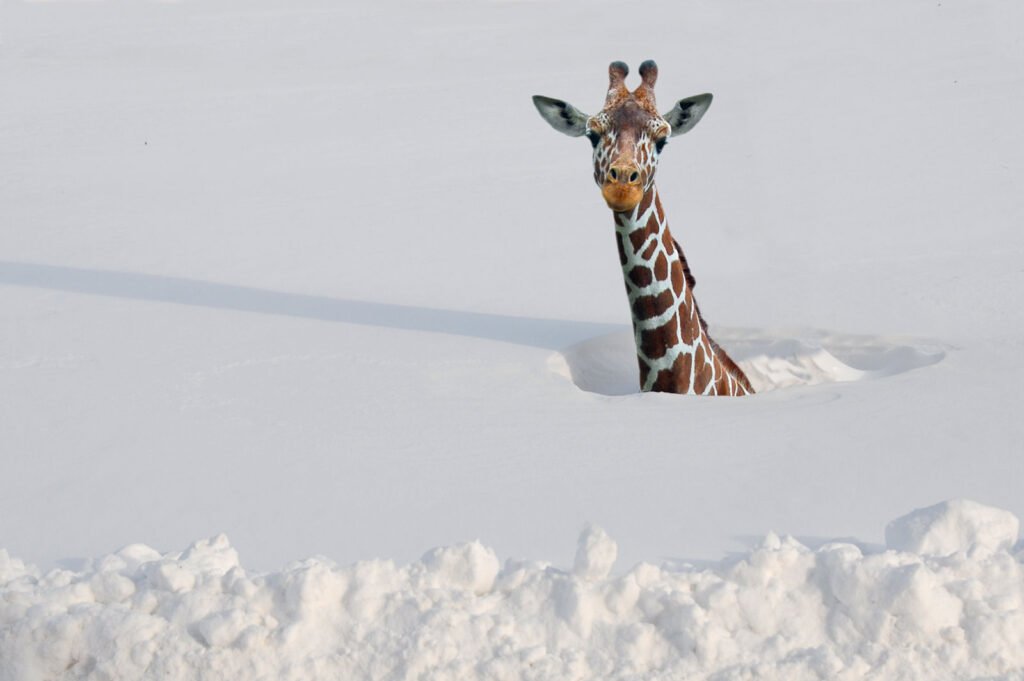 MANY AREAS OF THE COUNTRY SAW A WARM, DRY DECEMBER. POSSIBLE REASONS?

First, I will preface this story by sharing that the reason I am writing it is due to the handful or so of emails I’ve gotten from people wanting to preach gloom and doom to those of us who want to believe and enjoy the fact that we have skiing and snowboarding in the Southeast and mid-Atlantic. One such viewer emailed me, “Who are you going to believe? Me or your lying eyes? – seeming to indicate that there are no slopes open or that things are in terrible shape at our region’s ski areas.

I just finished skiing six straight days at Snowshoe with over 35 trails available to me AND I saw decent-to-nice slope availability at numerous other ski areas in the region. Speaking of “lying eyes”, I JUST toured all of the LIVE cameras at all of our ski resorts and there are TONS of people skiing and snowboarding TODAY at all of them.

I also need to preface the rest of this post by sharing that I am fully aware that there are some extremely intelligent people who make a living in the industry of “weather” who will strongly disagree with some of my comments. I will agree on their many points of contention and most all of the facts that they might want to put forth. Where I would disagree would be how their predictions will play out for those of us who love skiing and snowboarding – AND the convenience of having several options to play in our own back yards.

I am simply tired of having one or two negative nellies who simply get a kick out of ‘spitting in our faces and telling us that it’s raining’. I received an email this morning from a national source making the statement that is sub-titled to this story. It read,  “Many Areas of the Country Saw a Warm. Dry December. Possible reasons, Climate Change.”

That was the title. Well, sure climate change is a possible reason. However, so is the fact that there might be a La Niña or an El Niño or no Niño at all.

It’s possible that a volcano passed gas at about the same time a mild front was passing over and it brought milder air than anticipated and THAT is why it was mild and dry.

Still another possibility is too many damn airliners are flying stupid politicians in our skies, pouring massive carbon emissions. (Not to mention the OTHER 87,000 airliners that are in our skies every single day.)

…and it’s POSSIBLE that it is all just a never-ending cycle and that you, nor I, nor anyone on either side of the discussion can do anything about it.

I will start by commenting on the fact that skiers and snowboarders are by nature, cold and snow-loving souls. Most of us LIVE for winters that are colder and snowier than normal – whatever ‘normal’ is. While portions of our brains are analytical, most snow-loving souls tend to discount analytics and hold on to preseason predictions that tell us what we WANT to hear. I can attest to reading all of the preseason prognostications and if seven of ten forecasted normal or warmer than normal conditions with a dry winter – and three called for colder and snowier, I will opt for the colder prediction every time.

The realist in most of us KNOWS that things won’t be all that different from one year to the next. Here in the Southeast and mid-Atlantic that means that each ski resort will see anywhere from 15%-20% less or more snow than normal (with normal being what has fallen each year over a 15-20 year period) and we will see average temperatures that are anywhere from 1-2° milder or colder than normal.

Those are the facts. ALL you have to do is go to SkiSoutheast.com and click on ANY of the resort links and then click on “MOUNTAIN STATS” and you can view each of the season’s snowfalls back to 2004.

Here is another fact. For the most part, every ski resort in our region stays open from mid-December through at least mid-March and they rarely have days where they are not open for ski and snowboarding ops.

Translation: Going back 20-25 years, most every ski resort in our region has operated 90-100 days or more with MAYBE 2-4 days where they needed to temporarily shut down skiing for a day or so.

That is NOT something that is new to the mountain ops crews at our ski resorts. In fact, over the last ten seasons, we’ve had MORE skiable hours and days where ski areas have opened as early as Halloween and stayed open until the first days of April. That RARELY happened back ten seasons or so ago. 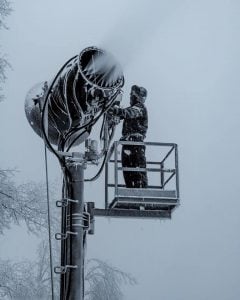 Most of that can be attributed to the HUGE improvements in snowmaking technologies; a lot of it can be attributed to the MASSIVE investments that our resort owners have committed to more snowmaking equipment and the resources and manpower to make that happen. However, it should be noted that even though snowmaking equipment has improved dramatically, they still can’t make snow unless the temperatures are pretty close to 32° and the colder, the better.

The main point I’m trying to make is that WINTER actually doesn’t begin until December 21st or so each year and it ends March 19th of this year. So we’ve only BEEN within the winter frame of the calendar for (11) days. There’s a LOT of winter left and despite some of the gloom and doomers out there…we will see another 88-89 days to ride (some ski areas will close mid-March) at many ski resorts of the Southeast and mid-Atlantic and I will bet you that we will probably only see another 2-3 days during that span where a resort or two will temporarily cease ski and snowboarding ops due to a mild-up or typical thaw period.

It has happened every year in the Southeast and mid-Atlantic since Wisp Resort open in 1955 in Maryland. It’s happened ever since The Homestead Ski Area opened in 1959; Cataloochee in 1961 and so on.

I visited Wisp Resort a number of seasons ago and remember being intrigued by the fact that they opened in 1955-1956 and yet didn’t start making snow until 1966-1967. So you can imagine that a typical ski season lasted from around December 20th to MAYBE mid-March and offered MAYBE 20-30 days where you could ski their available terrain in those early days.

It has ALWAYS snowed around 80-100″ of natural snowfall at even the snowiest ski areas in North Carolina and 100-150″ at the WV and MD ski areas…and without snowmaking equipment, we wouldn’t have the length of seasons we now enjoy.

Every ski area owner/manager can tell you stories from over the last twenty years and longer where they struggled to be able to remain open for ski ops AND they can tell you the seasons when things were really snowy and cold.

I just pulled one ski resort’s snowfall numbers from the last 15 seasons and please note that there is NO pattern to natural snowfall totals. The resort example below actually promotes that they average 80″ of snow annually. They actually average 75″ and those numbers go back as far as 40 years ago. However, here are the last fifteen seasons.

See any pattern? Me either.

Take the phrases “Global Warming” and “Climate Change” out of the mix and all you’ll see is that we have always had a somewhat better than even chance of things being snowier than normal and a slightly better chance of a significantly heavier snow season than not.

Temperatures have always swung wildly in the Southeast and mid-Atlantic. However, ski areas in our region have missed fewer days of skiing and snowboarding over the last decade than we did the decade prior. Snowmaking advancements and investments have insured us of that. (THANK YOUR SKI AREA OWNERS…) 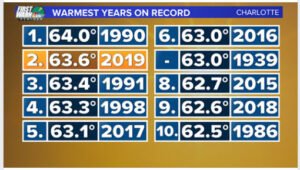 I received a Brad Panovich, Facebook post where he shared that 2019 was the second “warmest” year on record in Charlotte, North Carolina. That IS a fact. However, show me the pattern that dictates Global Warming or Climate Change as the cause and effect.

(To be clear, Brad mentioned nothing about Climate Change, etc. He simply reported the temps.)

Case in point – of those ten warmest years on record:

Let’s look closer…and what can we look forward to?

Here are THE LAST 13 seasons….

So over the last thirteen Januarys, we’ve seen an AVERAGE TEMP of 27.7° (averaging in HIGHS and LOWS) and that spells…lots of snowmaking and lots of slopes open.

I know that the vast majority of our readers and Facebook followers are mindless, ignorant people like myself who don’t pay much credence to the gloomers and doomers, negative nellies and others (in a massive minority) who are MUCH smarter than the rest of us – who seem to thrive on the telling us that the sky is falling and that we are destined to have to travel to the top 2,000 feet of Mount Everest to find snow in our future.

I also know that I will receive a few emails and perhaps a couple of Facebook comments wanting to tell me how truly ignorant I am. (Oh and I AM.) Heck, we even lost one of our reporters last season because they couldn’t be a part of a website or program that was so stupid as not to believe the scientific community that seems to say that we are all doomed to see all ski areas close sometime in the not so distant future.

Is the world getting warmer? Maybe. Maybe not. Right after creation (the big bang, etc.) it was probably pretty darn hot. During those ions, we’d have a ton of people warning us about Global cooling (if there had been people). Ever since the Ice Age we’ve been warming a bit. Come to think of it that happens in my glass of tea not long after I make it.

I will simply stick to logic and the facts are that we have seen the last four Januarys to be 1.4° milder than a four January period from 10-14 years ago. However, I can also show you a three year/January period within the same thirteen years where the average temperature was 25.2° or 2.5° colder than normal.

So jump all over me with data to support your genius thoughts to argue against my simpleminded ideals, however, for me what I will leave you with is this. Connect with me in 15 years. I will be skiing at various ski slopes of the Southeast and mid-Atlantic.

Here is my prediction for January-March 2020:

It will cold, followed by some untimely rain, followed by extreme cold, followed by a few days of thaw, followed by some nice snows. The end result might be snowfall totals anywhere from 10% more than normal by season’s end and it could be 70% off of normal. However, due to those few-to-many days of snowmaking temperatures AND the fantastic snowmaking teams of the Southeast and mid-Atlantic we will see lots of skiable terrain available for those of us who want to smile and live a little…and play in the snow.

The comments and opinions expressed in this post are the author’s and not necessarily those of our entire team, our advertisers or our ski area partners. (I would certainly hope they are though!  😉

You are welcome to email me your thoughts, but keep them as civil as my own. Email me at [email protected]