Why Stop at One? 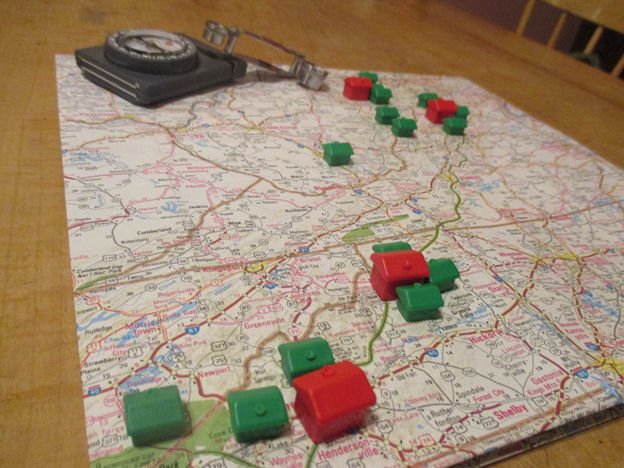 When you look at a map of the Southeast, highlighting the locations of all the ski areas, you notice immediately that as they spread out along the line of our southern mountains there are a few obvious clusters. Taking advantage of those happy accidents of geography (or perhaps inevitable outcomes of geology) can add a lot more interest to skiing in the south. Imagine a road side park spread around the picnic tables and rusting grills, a lot of kids are playing on the swings but a few have noticed that the jungle gym is so close that you could actually, with a little more push, jump off the swing and land on it. And while the rings are ok on their own, it would be even funner to swing around the teeter-totter to the high bar right behind them; you have to maximize your resources. Children are smart. So be childish and insist on an undisciplined approach; don’t ski at the same mountain by default, there’s another close by and neither one is huge around here so mix it up a little.

Enjoying multiple mountains during a single trip is something I have done for years; basically it’s a trick to make our terrain feel bigger. Variety is the spice of life and skiing the same 1000 vertical feet, less at most of our areas, for extended periods can become stale; maybe that’s just me, I’ll admit that I have the attention span of a squirrel (“hyper” I think was the accepted diagnosis when I was a kid.)   As we know the Allegheny, Smoky and Blue Ridge mountains are on a slightly smaller scale than say the Tetons, Wasatch and San Juan’s; and that’s ok, we ski what we’ve got and love it.   Still, any trick to make the experience feel larger than actual life is a winning strategy.

When I returned to skiing here in North Carolina after a long hiatus I was taking my sons on their first ski trips, and I was thrilled to be back on the snow and to share that with them, as is the norm we would go for a day or a weekend to a single resort and stay put. One-stop skiing made sense when renting equipment, getting oriented at unfamiliar base areas and generally corralling them and their friends; but as they got older and we all got better we started packing in a lot more runs and lapping the whole mountain a lot earlier. It may be scandalous to say but at times I found myself getting bored and started hankering for more. Again this could just be me, an exasperated middle school teacher once asked me “Must you constantly be entertained?” which strikes me as an odd question to this day and I would still say “Well yes, if I can.” I realize you can ski the same run a thousand different ways but somehow the snow always seemed whiter on the next run over, then the next mountain, then the next state. My solution to this quandary has been to ski a lot of places even if I stay a shorter time at each. Keep moving and you never get bored.

Groomers vs. Powder, when to deploy the multi-mountain strategy

My first priority is powder, always.   It didn’t used to be and I can appreciate the frustration that many, maybe most, people experience on their first powder days sinking into deep snow on undersized rental skis. But when slopes have powder you really can ski a 600 foot run seven hundred different ways; and then of course depending on local norms and your own level of commitment to following rules, there is the irresistible pull of the trees. At these times when the whole mountain is at play I am happy, actually ecstatic, to stay in one place and attempt to leave not one single snowflake unturned. Besides, when these glorious events do occur, being snowed-in and stranded is exactly where I want and plan to be, as happened to me at Timberline last month and not by accident. 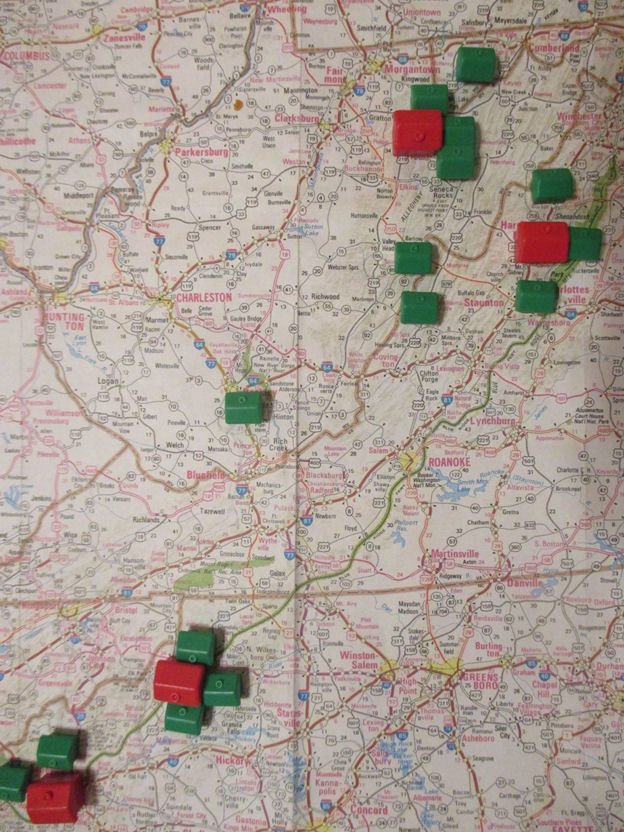 However, when the trees grow bare, the powder is a memory and the groomers have commenced to comb every tangle from every slope; then my attention starts to wander. I understand that some may love this medium; there are the racers, the fixed boot carvers and of course Captain America the Corduroy King (come to the SkiSoutheast Summit and meet them all.) Hats off to them and to the park riders who can play all day on an acre of features doing their crazy cool thing, but for anyone else who shares my wandering interest let me map out my tactic in detail.   The red monopoly motels indicate an area where more than one mountain is within one hour’s proximity.

Day tripping and the road beyond

I live three and a half hours from Sugar and Beech and their proximity opened my eyes one day. I had made a day trip to Beech which was maybe three quarters open; I grew a little bored and with the drive home on my mind I left at 3 o’clock about an hour early. I’d had the same experience at Sugar and most of our local hills, a kind of mid-afternoon doldrums; but this time, as I was passing Sugar, I thought, “I wish I could ski them both.” Being 22 minutes apart I realized I easily could and a couple of weeks later, I did just that. Why not be constantly entertained? Now if I ski a morning at Beech and an afternoon at Sugar, having a beverage and sandwich while gearing up between, it feels like I have skied twice as much terrain because of course I have. Actually it feels like I have had two unique days. The price of two half-day tickets is more than a single but well worth it, especially on a weekday. I do not always do this but when I do it is ALWAYS fun. My horizons had expanded and I started planning longer trips to a couple of mountains close to each other or maybe somewhere on the way to each.

So looking at the map Beech, Appalachian and Sugar are obvious one trip matches. It surprises me when people planning extended trips ask if they should go to Sugar or Beech, my answer is why in the world wouldn’t you ski both. The other region that is perfect for this hybrid plan is of course the Canaan Valley; not only do you have Canaan Valley Resort, Timberline, and Whitegrass, all striding distance apart, but Wisp is less than an hour and a half away on an always well maintained road. Or stay in Asheville and combine Cataloochee and Wolf Ridge, I may next week (it’s work related, really I swear.) Massanutten and Wintergreen are two of our best and they are an hour and eight minutes apart, with the pretty cool town of Harrisonburg right in between.

If you are making a longer drive, as in my case perhaps from the banks of the beautiful Haw river in central North Carolina, up and past the Greenbrier to Snowshoe or even to the Blackwater and into the Canaan Valley, you will pass within a ridgeline of some other great Ski mountains.   You can stop at one on the way and still have plenty of time to settle in for your longer weekend, possibly even with some night skiing that same evening. If you are planning to ski at Timberline or Canaan (or BOTH if you’ve been paying attention) you pass within sight of Wintergreen, which has terrain and lifts equal to anywhere in our region and has a flex four hour ticket that begins whenever purchased. Please don’t get me wrong, Wintergreen is its own destination and one of my favorites but I’m on a road trip now. Heading south or east from Snowshoe many of us can alter course just slightly along the absurdly picturesque U.S. Route 220 and ski a few hours at the Homestead. Speaking of the Homestead and some of our other great destinations, Randy Johnson wrote a good article here about the benefits of that experience.

Maybe I will do that one day, it’s tempting but I’m antsy and don’t stay at one place well, I always want another mountain and new snow even if it’s only around the next bend. I admit I’ve been a little dazed and exhausted by the end of some ambitious forays; but it’s always the right kind of tired, when I finally get home and get to sleep I’ve never regretted the trip. The times I cut things short are usually the ones I regret.

Finally, don’t let your destination blind you; next time you see something unexpected or pass a side road you’ve always looked at twice, take that detour and check it out; it could become your next destination. 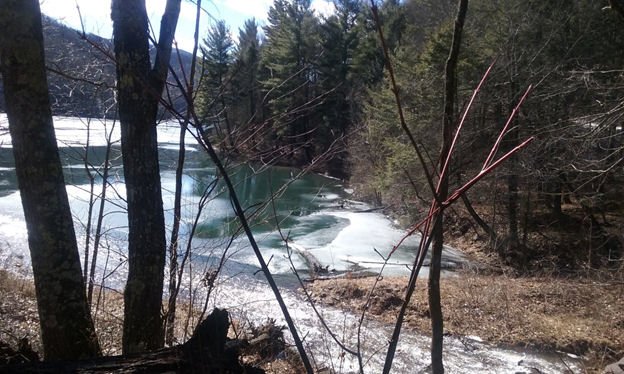 Previous Post
The Latest from Timberline Resort Pertaining to Their Thunderstruck Lift
Next Post
One More Day of Rain, Snow On the Way