A White Christmas Wasn’t in the Cards, But a White 1st Day of Spring is… 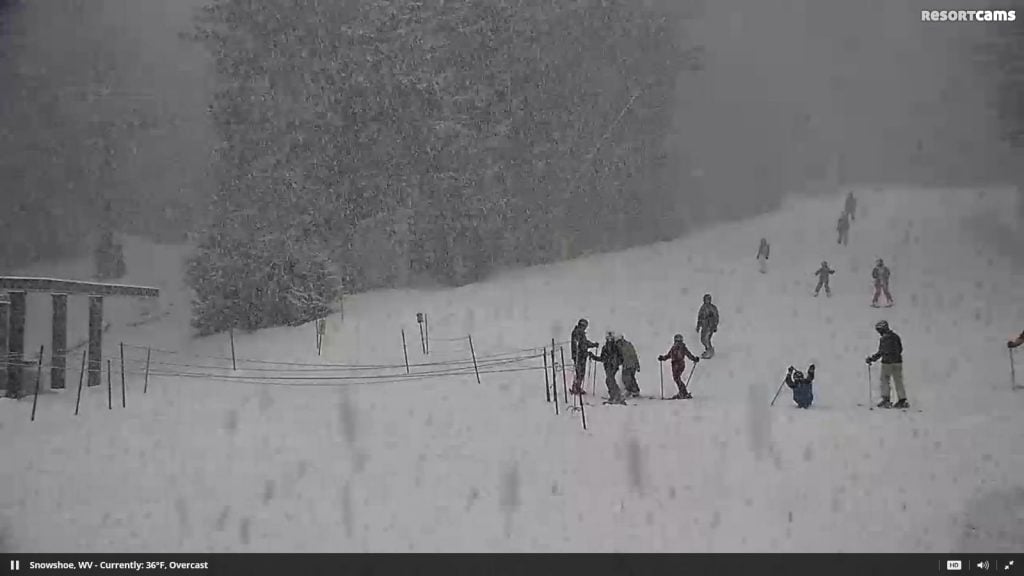 Hello! Hello! Is anybody out there? Hello! (More about that in a moment.)

We couldn’t find a flake of natural snow anywhere this past Christmas. Heck, we could BARELY find any manmade snow on the slopes as resorts across the region were CLOSED on Christmas Day this season with the lone exception of Snowshoe Mountain which had 13 trails available and Cataloochee Ski Area which was open with 3 trails.

Two days later on December 27th I was at Snowshoe enjoying their LAST DAY of skiing and snowboarding of 2015 when they had 10 slopes open. They closed the next day until reopening January 2nd.

So SNOW was scarce around these parts over the Christmas break.

Last weekend was one of those weekends that can make even the most die-hard skier and snowboarder forget that there is still snow on slopes. Temps reached into the 80s at MANY locations and I spent the day at the lake. Other than the fact that I have handled the FirsTrax morning blog and the snow report for the last week – my mind has been far from the slopes. Temperatures all week had me in shorts and ready for Summer.

If you’re reading this particular post – you are one of the FEW who are still interested in all things related to skiing and snowboarding at this point on the calendar. Traffic here on the site has taken a nosedive – as has the skier traffic on the slopes of our region. I took a glance at our stats just now and yesterday’s numbers reflected 5,761 visitors to the site. It’s SLOW out on the slopes too.

I looked at Beech’s base cam this morning and there was literally a handful of people riding up the quad and nobody on the slopes. Ditto Cataloochee.

Here are some views at 9:48am this morning across the region: 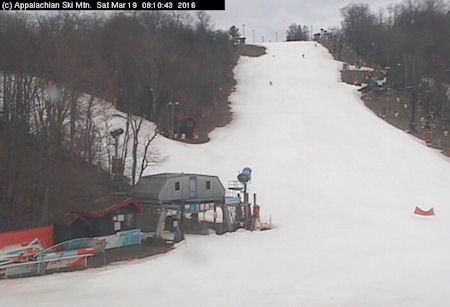 View of Appalachian Ski Mountain at 9:45am 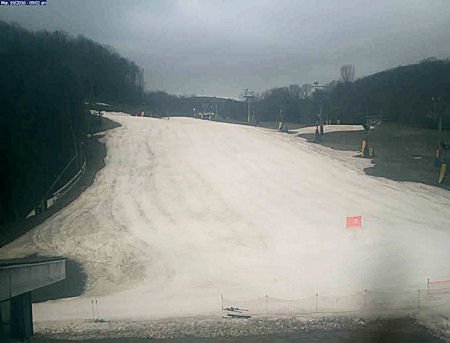 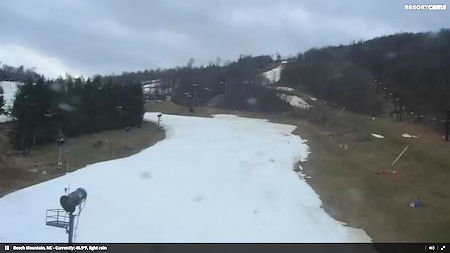 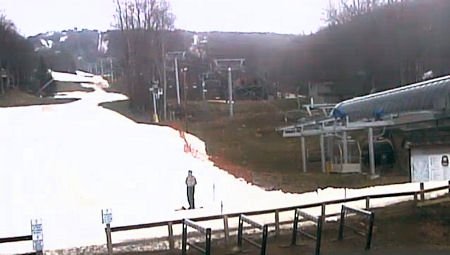 One lone snowboarder at the base of Sugar at 9:50am 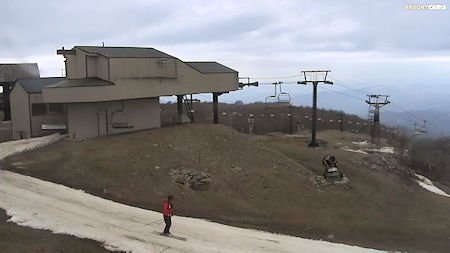 We caught this lone ski patroller at Beech

As we always report – SNOW TRUMPS EVERYTHING and there’s evidence of that as it is SNOWING PRETTY HARD as of 9:40am this morning at Snowshoe Mountain and there is fair number of people on the slopes. 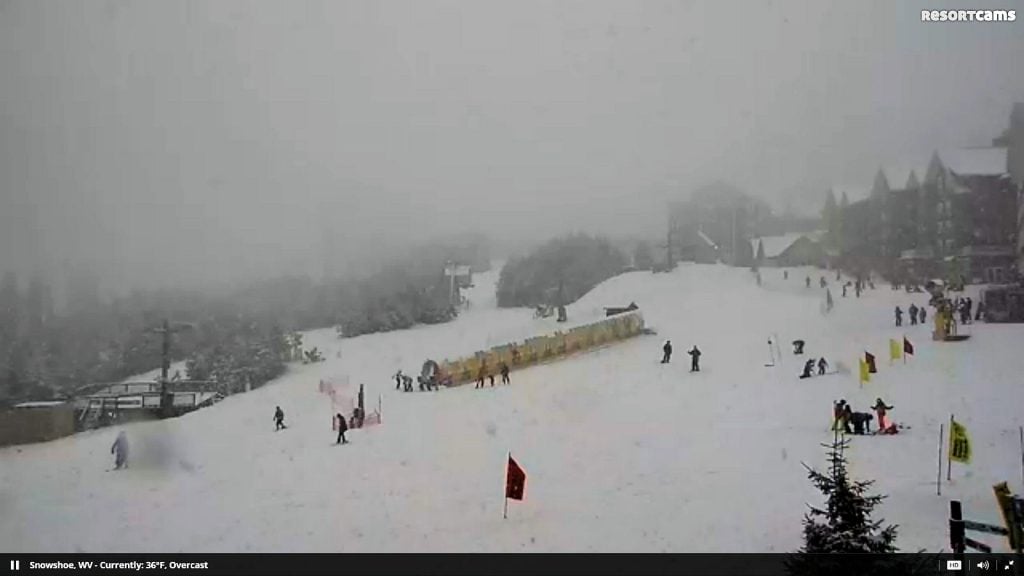 Unfortunately even Appalachian Ski Mountain with their very nice, side-to-side coverage…nobody is out there on the slopes. (Moments later there were three people coming down on a Saturday.)

Before I catch any heat – let me mention that certainly there will be some late starters who WILL make their way onto the slopes of each open resort later this morning or during the day, but traffic IS INDEED down at this point and we are JUST at Saturday, March 19th, 2016.

Regardless of skier traffic or the lack of it – THERE IS SKIING AND SNOWBOARDING HAPPENING across the Southeast. Let’s mention the ones that are “in it” for only today or tomorrow first since this may be the LAST time we’ll give them some space this season.

Beech Mountain Resort – light rain and 42° this morning – They are open for ONE MORE DAY (today) with six slopes open. They will close at 5pm.

Wintergreen Resort – They are open for today as well with 7 slopes and will close after today.

Winterplace Resort – They are open with 9 slopes today and the only reason that I am mentioning them next is because we are thinking that they will pull the plug after sessions tomorrow. They have not updated their “This Week at Winterplace Youtube Channel” since March 3rd so that and skier traffic tells me that tomorrow could certainly be their last day of the season – although they could surprise us and go one more week.

Let’s Talk About The Rest…

Snowshoe Mountain – 34° and snowing! – They are back UP to 46 slopes and trails for today and they still have Silvercreek open for night sessions. Snowshoe is expecting around 3-5″ of snow between now and Monday AM. Snowshoe has plans to make snow as well as temps allow overnight. Of course with this natural snow, they may decide not to fire them up. They have March 27th as their closing day.

Cataloochee Ski Area – 44° and light drizzle – They will night ski one more night tonight and then operate for day sessions through the week and close after day skiing and snowboarding on Saturday, March 26th. They have 13 slopes and trails open today.

Appalachian Ski Mountain – NO UPDATE – We think they have 11 slopes open. Word is that they plan to ski and ride until April 2nd.

Notables from the Ski Resorts themselves…

Wintergreen Resort Reopens today for ONE MORE DAY with 7 slopes and trails open. They will close for the season after today’s session. Pond Skimming at 1 pm. Choose your costume, strap on your skis or board, gather some speed, and try to make it across a 70 foot pond full of chilly water. Costumes are required, and figure into the judging process; valid lift ticket also required. Are you up for the challenge? Some will slide right across, some will splash; either way it will be a blast! Sign up at the Ski School desk from 9 am-12 pm.

Appalachian SKi Mountain – 42° this morning. Not sure what is happening with App’s snow reporter but the only way we’ve gotten a report is to call each morning. They went three days this past week without posting a report and I suppose we inspired a report on Friday but again today they have not updated.

I can tell you that App will cease night skiing and snowboarding after tonight’s sessions. They still plan to ride on into the first of April although we’re not sure that the weather will permit it. They do have their Meltdown Games planned for next weekend March 26th and 27th.

Drew Stanley emailed me on Friday with the following, “Given the forecast for Sunday & Monday, we are planning to make snow as temperatures allow to provide the best possible conditions for our guests. After a night or two of snowmaking, conditions should be excellent!”

That’s it for this morning.

Previous Post
Snowshoe Mountain to Make Snow this Weekend. Could see 6-12″ of snow as well!
Next Post
Vote for Cataloochee to Win National Snowmaking Award!