What’s Happening Around the Resorts? 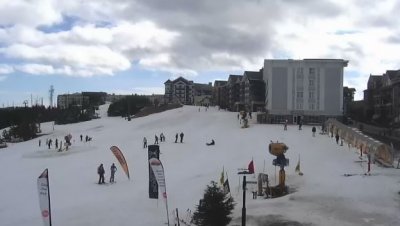 It's Tuesday, the sun is shining, and the slopes are open! Yesterday's rain didn't take away much off the bases, nor did the warmer temps. The resorts are sitting pretty and coasting on in to February with great conditions and great hopes for the second part of the season.

Not much to report on, other than the same old, so here's a conglomeration of what the resorts are talking about.

App's event calendar is pretty packed. Their next happening is this Saturday – Red Bull ThingamaJIB,  a "One of a kind rail jam." They'll be posting more details soon.

Cataloochee's mountain is operating at 95 percent today! Also, there are still a few days left to take advantage — "January is Learn to Ski and Snowboard Month and Cataloochee celebrates by offering you big incentives to learn to ski or ride this season! Go to www.liftopia.com and purchase your all inclusive learn to ski or ride package offering lesson, lift and ski or snowboard rental for anyone ages 8 and above on any non-holiday Monday through Friday for ONLY $29.00! Lesson is required." 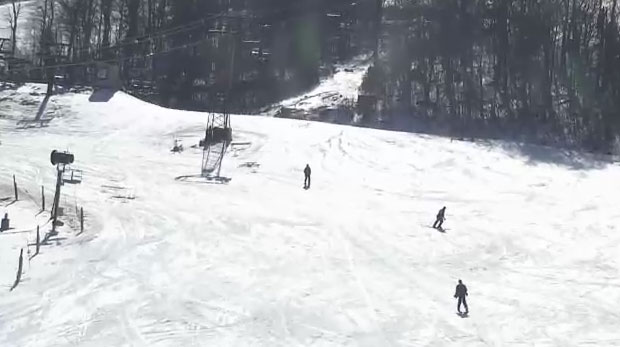 "It is a great day for skiing at Beech Mountain Resort.  The conditions are better than ever!  We have temporarily ceased snowmaking, so customers can expect a quality day on the slopes!" The cam doesn't lie >>

Sugar Mountain has a similar statement. "No Snowmaking today.  Spring-like today and tomorrow.  But winter returns Wednesday night and throughout the weekend.  Plan your winter getaway for this weekend."

Wolf Ridge is offering a pretty sweet deal today. "Don't forget today is Two For Tuesday – Buy one lift ticket, get a second FREE! Also, Learn to Ski and Snowboard Month continues this week with an amazing deal for those wanting to learn to ski or snowboard. Come on out and see us, it is going to be a great day on the slopes!" 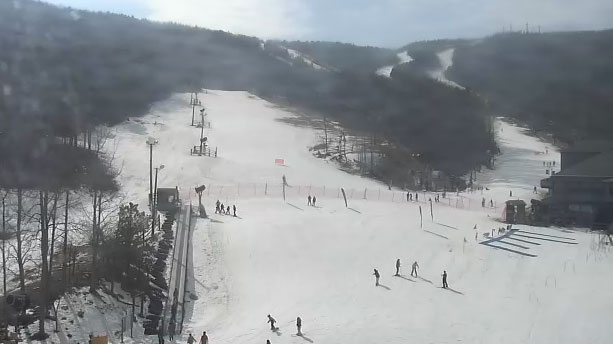 Bryce and Massanutten (shown left) are also both operating at 100% with eight open trails and four lifts, and 14 open trails and eight lifts, respectively. With highs in the upper 40s/lower 50s today and no snowmaking, they're "riding on some great snow!"

The Homestead is just two trails away from being 100% open. Hopefully in a week's time, with mother nature's boost, they can get there. In the meantime, they're boasting some great conditions.

Wintergreen is open today from 9a-9p, skiing and riding on 25 trails with 4 lifts operating.  "Today is a great day to ski and ride with lots of sun and tons of snow. Great snowmaking conditions return Thursday allowing us to make snow and provide the best skiing and riding surface conditions."

Canaan is sporting a similar promotion to Wolf Ridge's – BOGO Tuesday – "Two can ski for just $32 on Tuesdays – BOGO Lift Tickets." Valentine's Day is just around the corner. Celebrate two days early and on the slopes! 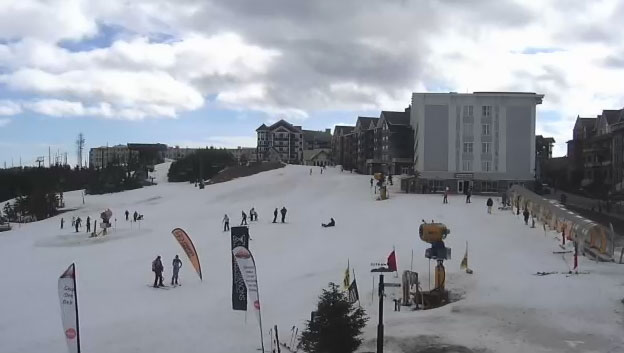 Snowshoe's running on 177 acres on this beautiful bluebird day and looking to expand. They're ready for the weather forecast to come to fruition. They posted on Facebook that "February is bringing the snow!" Here's hoping that applies to the entire region.

Timberline has a total of 91.5 acres open. They too are anxious for the near future, having posted on Facebook yesterday "We've got some rain but outlook is good for Thursday skiing." I'm sure today isn't bad!

"More snow forecast for later in the week," states Winterplace, who's lacking a few lifts, but have all  27 slopes open!

Wisp is operating at just under 80%. With seven trails to go, we'll need a big push from the sky. They're open today from 9am – 9pm. "The Nordic center will be closed until more natural snowfall is received, and snowmaking will continue later this week."

There you have it, the latest and the greatest at our 16 southeastern SEASONAL ski resorts (I can already tell you Liberty's going to be operating at 100% for quite some time ;)!

I'll do my best to have some "more exciting" news for you tomorrow.

Editor's Note: We always welcome and appreciate the feedback we get in response to the morning articles, announcements, etc. In view of that, I thought I'd respond publicly to one regarding yesterday's tidbit about my first time on a snowboard without a lesson. We DO promote safety on the slopes and we ARE advocates of taking lessons. In fact, I had intended on taking one, but later thought my friends (one of which IS an instructor at App) could teach me. This ended up not working out, and there were no actual lessons available during the short amount of time I was there. So, on account of being anxious to get out, and having already rented my gear, I decided to hit the bunny slope. I have skied, so when I said I had no clue, I suppose that was a little off-base. Also, when I admitted to taking the STEREOTYPICAL snowboarder's position, it was because I was waiting for the slope to clear! I made sure before I got going that I wouldn't jeopardize anyone in my way. Last but not least, while there were no available lessons for me to join, there were lessons (having had already started) taking place that I was able to listen in on. I picked up instructions here and there and watched demonstrations. While I am in no way an expert now, I assure you I was capable enough to be safe and responsible on the bunny slope. Before I venture out to the next level, you can bet I'll want to be more educated!

Previous Post
IT IS OUT THERE FOR THE TAKING, JUST LOOK FOR IT
Next Post
Valentine’s Day at 1861 Farmhouse!