What’s With All These Acorns? It’s Nuts! 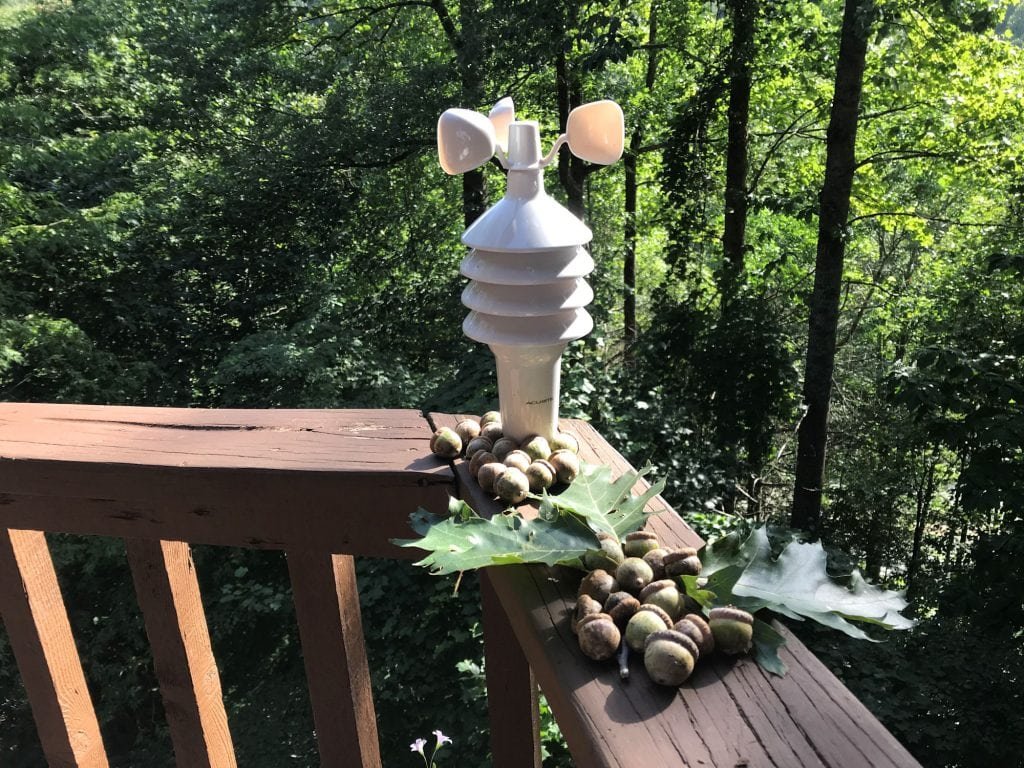 I was out in my yard after getting back in town this afternoon and I thought I’d chill for a few minutes in a hammock. However, before I could do that, I had to flip it over to dump out all the acorns. It’s a little early in the season to already be seeing this many acorns on the ground. I’ve reported heavy crops of acorns in the past as a potential sign of weather-to-come and some of our readers emailed me some of the following comments:

Acorns are a symbol of security and abundance. Folklore has it that carrying an acorn will bring forth a long and healthy life, luck, protection and warn off illnesses.

Acorns placed on windowsills protect the home from lightening. When the moon is full, an acorn placed on the windowsill will draw money to you.

The recently closed Foscoe Country Store used to be a morning gathering spot for many of the old locals and a lot of those guys and gals were farmers of all ilk – Christmas trees, nursery trees and more. I asked one of the older (and I figured wiser) of them what a bumper crop of acorns meant regarding the weather.

His answer? “Mike, I don’t rightly know about anything to do with the weather, but I’m pretty sure it means there will be a lot of little oak trees popping out of the ground.”

That’s the thing about asking an old-timer a question. Sometimes you’ll receive pearls of wisdom and sometimes you’ll get an elbow in the ribs. The guy’s wife was sitting beside him having breakfast and she winked at me and shared a version of the comment shared above, saying, “My mom used to say that planting one under the light of the Moon will bring luck and prosperity to you and your home.”

Nature Does Speak to Us…if we will listen.

My wonderful parents always taught me that there is a reason for everything that happens in nature. My mom would share that you just have to be quiet, patient and listen. Maybe that’s the reason why I occasionally just go outside and lay on the ground (or hammock) and stare up at the sky. Other times I close my eyes and just listen to all of the wildlife, birds and movement among the forest. I don’t do it enough, but man that is better than any music for relaxation or meditation.

As I was chilling on the hammock this afternoon I watched as several chipmunks and squirrels scurried around collecting some of those acorns. It occurred to me that there may indeed be a reason for a bumper crop of acorns, also known as a “mast year” and they may have a tie to weather.

Dr. Marc Abrams, a professor of forestry at Penn State, said mast years occur when nut-producing trees such as a oaks “produce an overabundance of nuts in a particular year, maybe five or 10 times more than an average year.”

However, Abrams described the mast year phenomenon as “one of the amazing mysteries in nature that we still do not have a handle on.”

Mast years happen irregularly, which Abrams said can make it challenging for scientists to understand what causes a mast year.

According to Abrams, a mast year can occur twice in a row or they might be several years in between.

“There’s no way to predict it,” he said.

I thought to myself – what else is difficult to predict? The weather, of course.

Before I get some biology freak emailing me – I’ve read that most acorns or nuts are formed in a two-year cycle. This suggests that if there is a weather connection, it could apply to the year before an actual bumper crop.

However, that doesn’t deter me from thinking that this phenomenon could simply be God’s way of preparing a feast for all the little critters of the forest. When things are colder and snowier than normal in the winter, there’s less of nature’s ‘grocery stores’ open for business. So perhaps this is nature’s way of providing sustenance.

I HAVE been looking around and everything that I am reading is predicting this to be an El Niño influenced winter.

The odds of an El Niño winter is growing stronger according to NOAA forecasters.

I will save the official reporting / predicting for this winter to our own meteorologist Brad Panovich and our in-house, weather guru, Kenny Griffin, but I CAN tell you that most everything I have been reading is forecasting a cold, wet, snowy winter with more snow than usual.

I’ll share more in the coming days (so be sure to visit often) but one video report that I watched yesterday called the Southeast and Mid-Atlantic a ‘winter battle zone’ that would brings several storms and some Nor’easters this winter.

One weather-writer warned about “how bad this winter will be for Western North Carolina and north into Virginia, West Virginia and the northeast.”

Sacrilege I tell you! Turn that weather frown upside down as that means awesome conditions for our ski resorts of the region.

Whether acorns can bring good luck, money and/or great health is a subject for the old-timers. Whether they bring more oak trees is a no-brainer. Whether, the bumper crop means good provisioning for the wildlife scurrying around just sounds logical to me.

If nature is providing for some early shopping for the chipmunks, squirrels and other nut-eating animals, then that’s a good enough sign for me.

Not sure if this is another coincidence or not – but locals are seeing a larger-than-usual bear population as well. When I arrived home this afternoon I saw evidence of that – that I could share, but you guys would not want to see that photo! (Ha. Ha.)