WHAT THE???? PART TWO OF AS THE MOUNTAIN TURNS 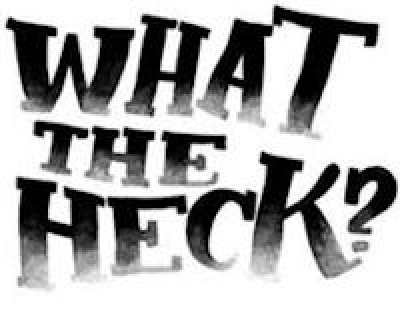 In this episode of "As the Mountain Turns" we find Orville English, the past, way past and evidently STILL CURRENT OWNER of Wolf Ridge Resort in Mars Hill, NC – getting the news that he is no longer the owner of HIS resort.

As you can imagine, he's somewhat surprised, as are many others that he no longer owns the mountain. It IS after all HIS mountain. Enter in Charles Stancil, who is Wolf's Marketing Director, IT guy, Communications Director, General Manager, and God knows what else. Charles is as confused as we are about "the whole affair" and simply putting out the fires from any aftermath of the social media blowing up with "news" about the sale.

Of course you can imagine that Mr. English is wondering why his bank account hasn't ballooned from the influx of revenue that would understandably come from depositing the funds from such a sale.

TRANSLATION…if you don't have time to watch the entire episode… (according to Wolf Ridge Resort) WOLF RIDGE RESORT HAS NOT BEEN SOLD.

What surprises the HELL out of me personally – having dealt with Orville myself over the years – is how in the heck he has allowed these peeps to "get away" with posting a website, doing a press release, and basically telling anyone who will listen that they've purchased the resort. I can't imagine WHY cease and desist orders haven't been issued. How are these guys still breathing. (Okay THAT'S an Exaggeration!) 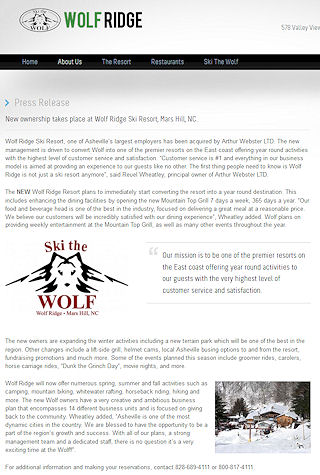 You can see the press release (shown Tuesday morning) on the right. Click it and it will show you the full sized version.

(Before you click…note you will have to CLICK BACK to get here again!)

After receiving the "story" as it was fed to us on Monday, AND since the folks at Wolf Ridge have been "not reachable", we had no reason to doubt the authenticity of the Press Release and the accompanying website that is STILL LIVE at www.WolfNC.com. What adds to the emphasis of this bit of "News Spam" is that the website is actually better in terms of presentation than Wolf Ridge's actual website.

LET'S HIT THE FAST FORWARD BUTTON ON THE REMOTE…

So Charles Stancil calls me. Remember he's the MD, IT, CD, GM and overall really good guy that only has a love for Wolf Ridge Resort that makes him a "bulldog" for the property. Anyway he calls and shares the fact that EVERYTHING that we shared with you on Tuesday morning is "not true".

Stancil allowed me to quote him as saying, "Until you hear it from us, Wolf Ridge has not been sold. The story, the website, the Facebook stuff, the press release, etc…is just not true."

Okay, so let's be clear – Wolf Ridge Resort has NOT been acquired by Authur Webster LTD as the screen capture from the website showed Tuesday morning. (You can CLICK on the image to see it FULL SIZED and read it for yourself.)

We are NOW not to believe the comments about the new terrain park, lift-side grill, helmet cams, local Asheville bussing….etc, etc.

So after speaking with Charles, and since I can't seem to get a conversation with Orville anymore, I went to the WolfNC.com website and noticed that the page that was running Tuesday morning – is no longer running. It HAD been running just two hours prior. Within MINUTES what used to be a link to "ABOUT US" had disappeared.

(It's now getting weird…because if you had not seen the Press Release you COULD assume that I/we had made the whole thing up!)

I always say that "God takes care of fools and children"…and that I must be one foolish child because LUCKY FOR ME I am always so busy that I routinely keep a dozen or more tabs open for DAYS on my computer. Several TABS back was the press release page that I had not navigated away from since I used it to POST the announcement.

I have pasted that to this story to show you that THERE WAS INDEED a Press Release, and THERE WAS INDEED navigation to an "about us" page that included the press release in full as was sent to us by more than a few people in the last two days.

(Man I sure as heck don't want Orville on me. If he can't find these Arthur Webster LTD peeps, Reuel Wheatley, Tom Buork (spelling uncertain) or Eric Christensen (all who are associated with this story) then Mr. English might look for the closest person he could find! …and hey I LIKE breathing!)

Lucky for me I had not closed the page yet. Luckier still I have now saved that bad boy on my desktop!

There's certainly A LOT MORE to this story than perhaps I will ever be allowed to know or learn about. That's okay. Bear in mind that I have spoken with two local realtors, one staffer and another resident WHO HAVE ALL heard the rumors that have evidently been ongoing for more than two years. Each of these people informed me that there was a "big news conference scheduled for this Thursday, January 10th". So either this rumor has taken on steroid enhancements or there's some truth to it and someone let the cat out of the bag too soon. Maybe there was something to the story a long time ago and they built all of this website stuff only to "FORGET" that it was still running??? Maybe they continued to pay hosting to keep the inaccurate news running monthly???

Houston, we have a problem! Notice that the domain name is only a few weeks old!

Using my trusty web tools, I researched the domain name only to find out that the domain name wolfNC.com was only purchased on December 13, 2012. So this thing is NEW! The registration is from Toronto. Where have I heard Toronto from lately?

As of late on Monday I'd received three emails from people asking me if I'd seen the website. ONE of them was from an old resident of Wolf Laurel who NOW LIVES IN TORONTO. Could it be…???

Anything that I say or write from here forward would be total speculation, however something is rotten in Denmark, or Wolf Ridge, or Mars Hill, or Toronto…

Somebody or some bodies went through a lot of trouble and at least a couple of days of design time to post a website with nice imagery…mostly of the new Mountain Top Grill. As I mentioned in Tuesday morning's story other than the nice photos of the face of the lodge and restaurant, most of the ski pics (grooming too) are from resorts out in Utah, Colorado or the Swiss Alps. What's up with that?

Clicks that WERE working Tuesday morning to the "View the rooms" and "Plan your vacation" pages are not working anymore. (Someone has obviously gotten the memo! I tell you man when WE post news, it gets read fast!)

One page that still is running for now is the "the-resort" page which goes into great promotional content (whoever wrote that stuff is talented!) but they close with what is NOW being related to ME as a lie. It reads, "So, come up to Wolf Ridge Resort and enjoy a relaxing or adventurous vacation with your loved ones. New management, new mountain, new memories!"

UHMMMM, not so much. At least not the new management, new mountain, new memories part. See: http://wolfnc.com/the-resort/

SOCIAL NOT SO MUCH RELIABLE…

Whether some of the trusted contacts I have are being duped or whether this was all about a bunch of wishful thinking…someone has a lot of explainin' to do.

Frankly I think there HAS to be some basis of truth to the story although I'm being told by OTHER trusted people that it isn't. For me this is kind of like your mom telling you that Santa doesn't exist anymore only to have your Dad tell you that he does. I mean you WANT to believe that this news is real…kind of.

I have always enjoyed my short conversations with Orville. He IS a man of very few words. He is a doer…not a talker…at least not with me. Truthfully I think Orville is leary of the internet and everyone associated with it. For that reason Orville has always trusted me about as far as he could throw me which is less and less every day because he's getting older and I'm getting heavier!

Regardless I think we ALL want a sweeter, brighter, cooler, colder, snowier, more profitable, more enjoyable future for Wolf, including Mr. English. We all want the snow to be powder and perfect corduroy all of the time. We all want…period.

After I shared the story Tuesday morning, one of our long time readers/followers emailed me these emails in sequence today.

"Well I'll be damned!  I guess the ownership rumor from last year was true.  Let's wish them the best of luck.  If history repeats, Orville will buy it back in foreclosure within 5 years."

"…a past WL POA president is out skiing today and from his e-mail below, sounds like business as usual on the ground at the resort.  Funny!"

What he was alluding to was this comment from a fellow resident….

"News to me.  I am skiing today and the usual employees are hanging around and the carpet lift is broken!"

…okay maybe the story is bogus. It isn't April 1st and I didn't post the website or the press release. I don't DO Facebook so I had nothing to do with that either. I received the same BS that I've now shared with you guys and when no contact was responded to by Wolf Ridge management we posted the story.

I guess what makes this even weirder for me is that it comes on the heels of a LOT of other internet chatter posted elsewhere with negative stories about the ski area. I posted a story about THAT on Sunday.

Until next time on "As the Mountain Turns…"

Editor's Note: UPDATE: 01/09/2013: 8:13am: I was in such a hurry to get this followup posted on Tuesday afternoon that it was filled with typos and somewhat difficult to read. Sorry about that! I've fixed the typos…hopefully!

Previous Post
The Beech Mountain Learn to Ski Challenge Poster Contest
Next Post
NOT YET FAT TUESDAY, BUT WEIRD TUESDAY