What season is it? For that matter WHAT YEAR IS IT?

The calendar may reflect that it is February 22, 2014, however if you're checking out the temps and conditions from across the region (especially the forecasted highs for today and tomorrow), you'd think that we're already into late March or early April. Highs today are forecasted to be in the mid to upper 50s around Beech and Sugar – to 50° or so around Snowshoe, Canaan and Timberline.

The day is starting out cold enough with some icy roads here and there up in Pocahontas County, WV (by God). All of the LIVE CAMS are showing some nice snow cover on all of the slopes of the region – although there are a few less slopes open (accumulatively) across the region. There's plenty of natural snow still on the ground in Virginia, West Virginia and Maryland and some still hanging around atop the highest elevations of the High Country.

So there's plenty of snow to play in and around – and the slopes themselves will offer deep bases, great trail coverage (side-to-side) everywhere you want to ski or ride today – but the surface conditions will be VERY Spring-like across the region as highs in the 50s to near 60° and all that blaring sunshine will make for some soft snow to ride.

To be honest – I actually prefer the early morning setup when it is like this because the snow will be perfect for carving early. Admittedly it can get a little hard to figure out later in the day once the heavy traffic hits it because you'll alternately ski from slick to heavy corn to nice carving snow to shaved…almost all at once…especially where the snow gathers at the trail merges, etc.

According to the forecast, we're looking at more of the same on Sunday with highs perhaps a notch milder – so things will feel considerably Spring-like, despite what the calendar says.

WHAT THE HECK IS SHE WEARING? 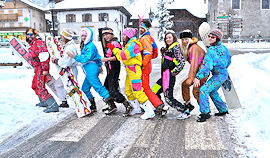 It will ALSO look very 80s if you're up at Beech Mountain Resort today and tonight as peeps will be wearing their best (and most colorful) 80s outfits for Beech Mountain's Retro Weekend. That is always a fun time. Tim Bahlke and Kenny Griffin from our team will be up there all day. That is why yours truly is handling the snow report and writing duties today.

Kenny and Tim (or Tim and Kenny) will be making some turns, knocking back a few brews and hanging with many of the SkiNC oldtimers and newbies today. From my experience, I'm thinking that one section of the Beech Mountain parking lot will be amongst the busiest section of the hill most all day as they do a pretty mean impression of a tailgate up there on these "mini-Summit" weekends.

SORRY I'VE BEEN SO INCOGNITO THIS SEASON!

I've had a few people asking "where I've been" etc. Coincidentally just last night I received one such from a longtime friend wondering if I'd be at Beech today. Since I'm doing this BLOG this morning…I guess now is as good a time as any to "splain myself".

To all of you who I've come to know and love from the messageboard and from making turns on the mountains over these last 17 years that I've operated SkiSoutheast – I really can't believe that "LIFE has gotten so 'in the way'" this season. I was telling Tim on Friday that a few years back I skied MORE ski resorts in a stretch of three hours than I have skied in ALL of this season. That sounds a little far-fetched but it is the truth.

A decade or more ago, my wife and I had Gold Cards and we started our day at Appalachian and hit that great, little mountain for about two hours and then headed over to Hawksnest and skied there until around 1pm. Then we drive the 15 minutes to Sugar and skied there until the slopes closed for grooming at 4:30. Then we caught some snacks and drove up to Beech and skied til 10pm.

We were crawling in the door of our home up on Seven Devils when my brother-in-law called to say that he was on his way up to do Nighthawk with me!?!?!

I couldn't say no (and I'm not sure I wanted to) but we skied from midnight until 4am that next "morning". Needless to say that I was one worn-out dude the next day or so.

Anyway – I bring that up to NOW reflect on a season where I've skied one resort, ONE trip this season.

I haven't been very "social" on the website this season as one thing or another kind of got in the way. I won't make excuses except to say that it hasn't been because I didn't want to. I lost my brother about the time we needed to gear up for the 2013-2014 ski season. Then around the time the snowguns cranked up, my dad found out he had/has cancer and he's been undergoing chemo. The time making trips back and forth to hospitals and hanging with my Pop also exacerbated my load at work…which is a whole 'nuther' story. Business is good, it's just been a little hectic to say the least.

So "LIFE" has just been "in the way". Thankfully Tim Bahlke came on board and between him, Kenny Griffin and the contributions of Brad Panovich, Herb Stevens and Joe Stevens – you've been in great hands and probably haven't missed me. (I'm not looking for sympathy points here. Those who know me, know I'm not built that way.)

However I just wanted to express that I have missed you guys and although my focus during THIS particular chapter of SkiSoutheast has been all over the place – I plan on "doing it all over again" in the future and hope to see things ramp up and allow me to get out on the slopes more.

If you're headed to the slopes, expect plenty of snow, great coverage and soft, springlike conditions for today. Ski or ride early and often if you can.

Drop me an email if you'd like to say "Hi". [email protected]