What a Wild Weather Ride in the Last 24 Hours! 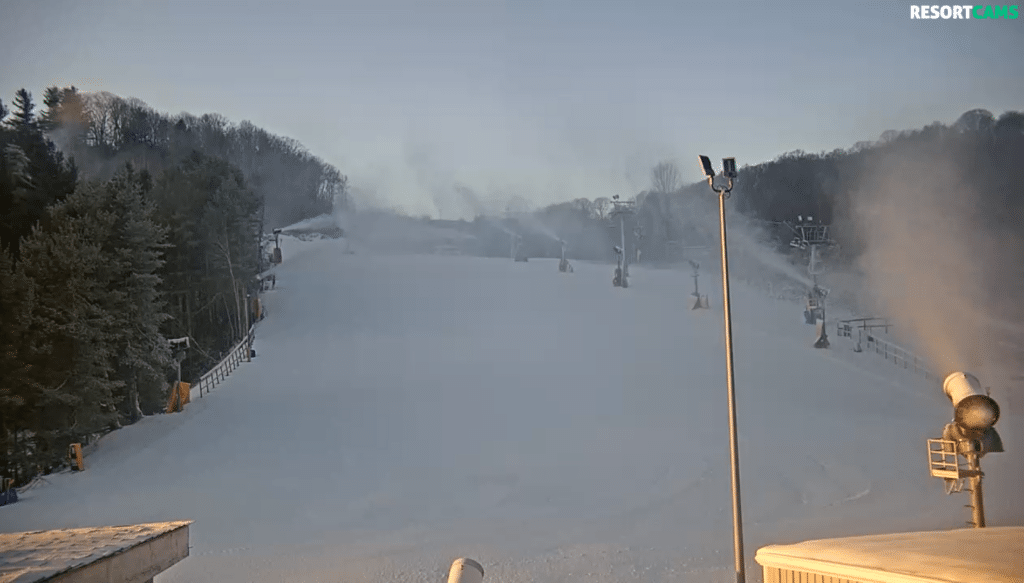 I know most of our avid readers and followers are not only skiers and snowboarders, but weather geeks as well. We’ve been blessed with a consistent stretch of very nice, cold temperatures for snowmaking at all of the ski resorts over the last couple of weeks, with the exceptions of those in the state of Virginia so far where only Wintergreen Resort has been able to make snow.

We’ve also seen from 5″ of natural snowfall in the North Carolina mountains to over 16″ of natural snowfall up at Canaan Valley Resort over the last couple of weeks. Our own, Kenny Griffin was able to make it to Snowshoe Mountain Wednesday night in time for the Thursday, opening session for those with Ikon or Season Passes. He reported that Thursday was beautiful and cold with firm snow and great conditions for photos ops, etc. Then on Friday, for their official opening day at Snowshoe for all guests, things were a little damp with light rain on and off all day.

It was a bit more than light rain in some areas over the last 24 hours as I can report that we had waterfalls coming down in our yard here in beautiful Sleepy Hollow, off Hwy 105 South in between Boone and Seven Devils. The official report says 0.90″ of rain here in the last 24 hours, but gracious it felt like more. As I looked around the area I saw:

…so it is a safe bet to say that most mountaintops probably saw from 0.50″ to an inch of rain in the last 24 hours. However, at least at Snowshoe Mountain that rain changed over to 3″ of natural snowfall overnight, which will make things pretty awesome for Saturday sessions at Snowshoe Mountain.

Most crucial to the ski and snowboarding conditions for today is the fact that cold temperatures filtered down to allow for snowmaking overnight at these ski areas:

As I looked at the LIVE cams this morning, it was obvious that things were pretty frosty up at Beech Mountain which seemed to have the coldest temperature this morning. It was very dense fog up there and that was causing some beautiful rime ice on the trees if you are going to drive up there today.

I THINK Kenny Griffin is still at Snowshoe Mountain today so I’d expect to see some photos and videos from the Shoe. Reporter, Brian Dix is riding at Cataloochee Ski Area today and things looked awesome there this morning as the sun was coming out. Justin Partridge should be riding at Beech Mountain Resort on Sunday so we should be able to get you some nice updates throughout the weekend.

To continue reading, you can SCROLL below these videos to get the full details of who is open and with how many trails…or you can get your report via video below.

The deets for today: (Alphabetically and with those resorts that are open first.)

Tickets must be purchased online in advance by Noon the day before.

Beech Mountain Resort – 28° – Opening Day is today! – 5 slopes, 3 lifts – 18-30″ base for day sessions only today. They are reporting 3″ of new snow over the last 24 hours and that is an early season hiccup. There was nothing but rain over the last 24 hours. There is dense fog atop Beech right now this morning, but perhaps an inch of snow is in the forecast for today and they are making snow as well.

Cataloochee Ski Area – 29° – They are making snow like crazy this morning and they picked up a trace of snow overnight and it looks really snowy there this morning. They have 8 slopes open to the top of their mountain, with 3 lifts in operation on a base of 18-28″ of Groomed conditions. They are doing day sessions only today.

Ober Gatlinburg – 30° – They are open from noon until 7pm today and look really great with 5 slopes open, serviced by 3 lifts with a base of 20-30″. Snowtubing and ice skating are open. Tickets available online only. So great to see Ober getting some love from the weather!

Snowshoe Mountain – 26° and they saw 3″ of new snowfall overnight, taking them to 15″ on the season. The are also making snow across the entire mountain this morning and have 15 slopes open today, serviced by 3 lifts on an average base of 45″. Pretty awesome.

Sugar Mountain Resort – 26° – and making snow. They are open with a base of 15-45″ on 7 slopes, serviced by 3 lifts for day and night sessions. They also have their tubing hill open as well as ice skating.

Bryce Resort – 39° – They did make snow a couple of days ago and were hoping the temperatures would allow more, but right now they are waiting on the next cold, snowmaking window.

Canaan Valley Resort – 30° – no snowmaking overnight. Things look snowy there this morning and the forecast does have a bit more snow in it for today. Crazy that they have already seen 16.6″ of natural snowfall this pre-season. Canaan Valley Resort is eyeing December 19th as their target date to get open. I’m looking forward to making some turns there over the Christmas-New-Year break.

Massanutten Resort – They have not yet made snow this pre-season and an opening date is to be determined.

Omni Homestead Resort – Not yet made snow and an opening date is to be determined.

Sapphire Valley – The ski area has not been groomed for skiers yet. There are piles of snow over 8 feet deep in places!! Target opening is December 12th.

Wintergreen Resort – They have been making snow whenever possible and plan to open as soon as possible.

Winterplace Resort – They’ve made a ton of snow and look ready to open today, however, they have set December 12th as their target date to open.

Wisp Resort – is also waiting a bit longer. They have made snow on a few occasions and picked up a foot of natural snowfall on the preseason, however, they have yet to announce and opening date. You can bet that will be over the next ten days plus or minus.

Wolf Ridge Resort – They were really making snow in a big way earlier in the week and things look ready to open, however they have set Friday, December 11th as their opening date.

Timberline Mountain – They have been making snow but an opening day is to be determined.

I know a lot of people are emailing us about Timberline over the last couple of weeks and asking questions about everything new there and about being able to view a LIVE cam there. Last year Timberline was closed and they have been purchased by new owners and they’ve added two new lifts, and invested in tons of new snowmaking equipment.

The resort, which originally opened in the early 80’s, fell into bankruptcy in 2019 and was not open for last ski season. Work to restore the ski area began immediately after the purchase by Perfect North Slopes in December.

Jonathan Davis and Chip Perfect of Perfect North Slopes stated, “We look forward to participating in the economic development of Tucker County and we’re excited about all of the significant investment in Timberline Mountain’s infrastructure that took place this summer. ”

“I believe skiers and snowboarders are going to really enjoy the new experience on this very special mountain,” says Chip Perfect, President of Perfect North Slopes and CEO of Timberline Mountain.

Perfect’s family has been in the winter sport business for over 40-years, with the operation of the Lawrenceburg, Indiana resort.  Perfect is also a member of the Indiana State Senate.

That’s it for today. Email me as you like: [email protected]

Previous Post
Snowshoe and Ober Gatlinburg Kicking Off the Season
Next Post
Don’t Be The Reason Ski Season Gets Cut Short This Winter!