What A Great First Week of the Year It Has Been! 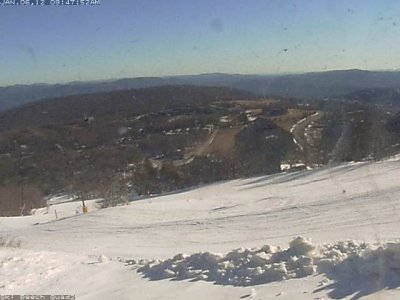 Well, the first week of the New Year is almost over. It has definitely been a good one to say the least. Things look a heck of a lot better than they did at the end of last week. Today is also the first day that I can say that all of the ski areas in the region are open, as Sapphire Valley is opening at noon today. FINALLY, we are at 100%!

I’m looking at the cams right now and I am really jealous of a few of my friends who are riding at Beech this morning. Jamsandwich, GrizzlyEnton, MellowYellow, and 2slikstik are all out there and this first hour of the morning should be the best riding conditions of the year so far. Today in general is going to be awesome for every resort in the region. There are bluebird skies and some sweet looking corduroy everywhere right now. I rode last night and I’m itching to get back out there right now. Conditions at Beech last night were definitely the best that I’ve seen all year. The snow was fantastic. 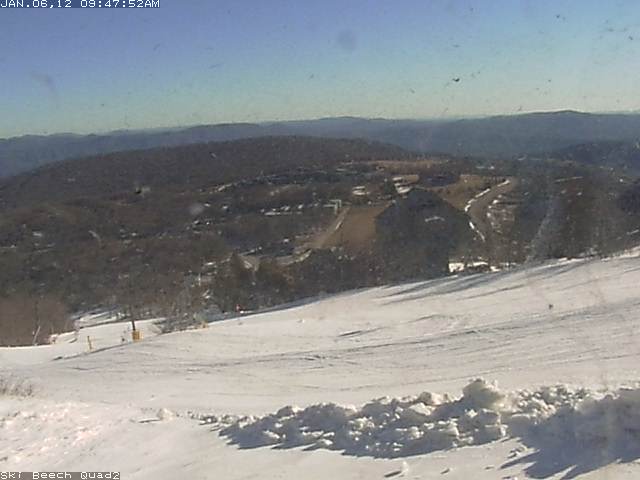 <<< Conditions look fantastic at Beech this morning.  Man, I wish I was out there!  Bluebird conditions exist everywhere today!

As I talked about earlier this week, the weather has been pretty crazy. Sunday was really mild, Tuesday was absolutely freezing, and today it’s going to be mild again. Highs at some of the ski areas today will be a good 30-40 degrees warmer than they were on Tuesday. So, if you are able to get out today it should be pretty awesome. Spring-like riding will be prevalent everywhere. It’s a hoody day!

It looks like tomorrow there is underdeveloped snow possible at some areas, mainly for the ski areas in North Carolina and West Virginia. Don’t worry though, nothing heavy is expected so we won’t see the downpours that we experienced in December.

In general, the next 6 days look to be “cool”. I say cool because it won’t be warm enough to be classified as mild, but it will be warmer than we’d like it to be. The best snowmaking opportunities look to be in West Virginia where lows overnight will dip down below freezing several times. The ski areas up there have definitely benefited from being farther north so far this year as conditions have been noticeably better up that direction.

Everyone else might have to rely on what they have right now. Snowmaking everywhere this week has been impressive though so the terrain that is open right now should be fine for the most part.  The good news is that the second half of January looks to see a return of much colder weather, which will be much welcomed!

There’s a lot of stuff to talk about at the ski areas this morning, so let’s get to it.

App – They are open on 10 trails today and tonight with a base depth of 40-70”. The only slopes that aren’t open are Hard Core and Thin Slice. They have several events going on out there this weekend. Fresh Friday #2 goes down tonight and with all the snow they have layed down this week, I suspect they will have a great setup for that. The K2 Pop This! High Ollie Contest also is happening tonight. That sounds like a pretty cool event. Apparently the world record is 100 cm? That’s crazy. Anyways, the first Ladies Park Night of the season is tomorrow night. They will be constructing a terrain park area “with features specifically designed for learning and progression that will be open to ladies only.” It should be a fun weekend out there.

Beech – Open today and tonight on 9 trails with a 22-50” base. As I already mentioned, Meadows is opening today and I can almost guarantee that Powderbowl will be as well tomorrow. Winterfest is this weekend and there will be all kinds of stuff going on out there. The Roots Rideshop Rail Jam, the Great Cardboard Box Derby, the Bathing Beauty comp, and the NC State Championship Snowshoe Race will all be happening this weekend. Click HERE to read more info about all the events on their website.

Cataloochee – Cat is open to the top today and tonight with 15 trails. That’s almost the entire mountain! Their snowmaking has been impressive this year and the grooming out there this morning looks fantastic. Cat has also added a new camera this week that gives an awesome profile view of the mountain. Watching the sunrise in the mornings is pretty cool! 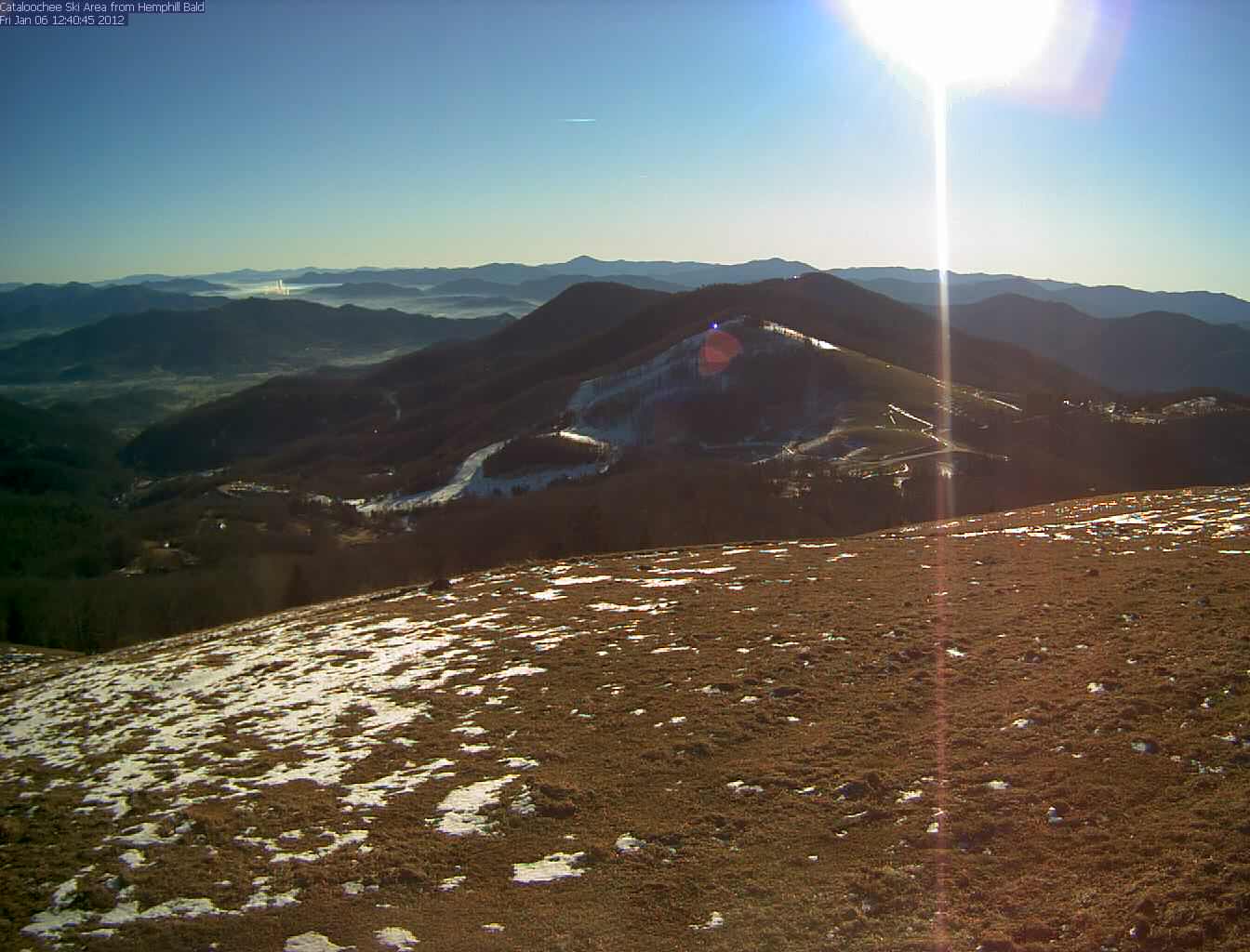 <<< The new cam at Cataloochee is pretty sweet!  I love the profile view of the resort.

Sugar – Open today and tonight on 13 trails today with 6 lifts operating. Big Red and Sugar Slalom both opened yesterday. Our Sugar Ski and Country Club cam is pretty fantastic to watch now that Big Red is open. Tubing and ice skating are also open this weekend.

Wolf Ridge – They are open today and tonight on 5 trails. It’s been nice to be able to talk about Wolf being open this week. They are debuting their new tubing run today which is longer, faster, and has a magic carpet lift.

Sapphire Valley – Sapphire Valley is opening for the season today at noon. They haven’t updated their site yet but as soon as they do I will edit this.

Ober Gatlinburg – Open today and tonight on 5 trails with a 10-16 inch base. Tubing is open as well. Ober posted some photos from yesterday on their Facebook page, and I must say conditions look pretty awesome out there! You can check out conditions on the webcam. 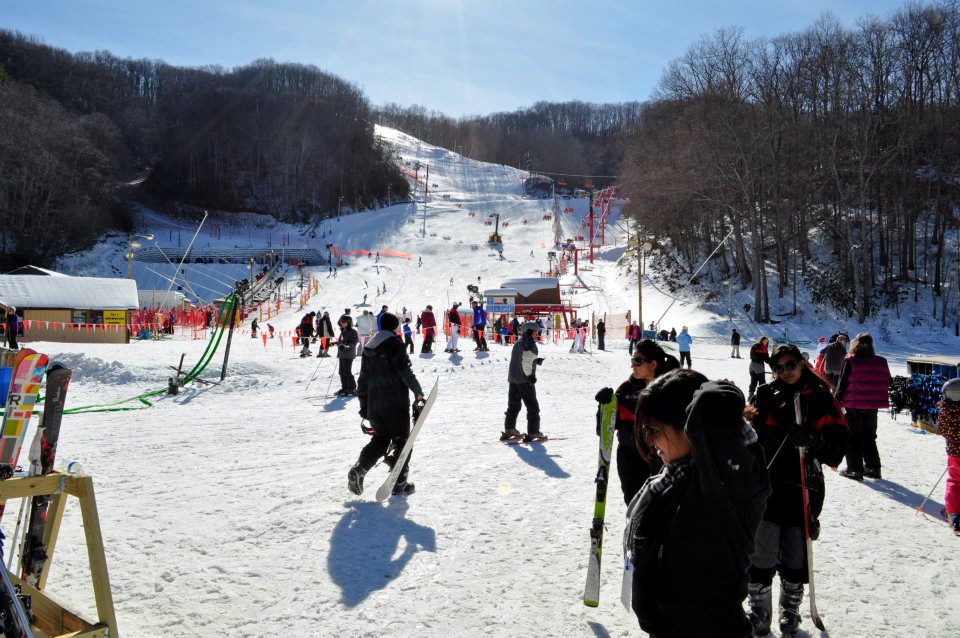 <<< This picture was taken at Ober yesterday.  Things look pretty good out there!

Massanutten – Massanutten is open on 7 trails today and tonight with a 20-30” base. They have added several trails over the past few days, most notably Upper Showtime and the CMB Terrain Park. They’re going to have live music at the lodge tonight and tomorrow night. Should be fun!

Bryce Resort – They will be skiing and riding today and tonight on all 8 trails, I think. Their Twitter account says they will be 100% open today, but their snow report page says only 7 trails. Either way, conditions should be really good out there this weekend. They will be tubing as well. Watch all the action on the LIVE CAM.

Wintergreen – Open for day and night sessions on 8 trails. Tubing is also re-opening today. We never really hear much from these guys and I wish we did, as I’ve heard nothing but good things about the place and all the pictures I’ve ever seen look awesome.

Winterplace – They are riding today and tonight on 17 trails. That’s the third most in the region! They will be opening even more terrain later today as NoseDive, Plunge and Snowbowl will open. Conditions look fantastic up there as their completely automated snowmaking system has been killing it. They will open tubing for the season tomorrow as well.

Canaan Valley – Open on 10 trails today. They’ve seen over a foot of snow this week and conditions look great on the webcam. Look for them to open additional terrain by tomorrow. Tubing is also open this weekend. Today through Sunday they will be having their 40th Anniversary Celebration. Lift tickets are only 30 bucks and they have lodging deals as low as $40 per person per night.

Timberline – Open on 18 trails today. That’s tied with Wisp for second most in the region! Like Canaan and Snowshoe, they haven seen over a foot of snow this week. The cam is showing great conditions. This weekend is Wild West Weekend out there. They say, “The Timbers Grill and Pub and the Timberhause Cafeteria will be in full swing to serve the guests for the Winter Wild West Weekend. Upbeat contemporary and classic Wild West music. There is no cover charge for any performance.”

Wisp – They are open today and tonight on 18 trails with 7 lifts spinning. Their open trail count has more than doubled this week. The foot and a half of snow they have seen this week has definitely helped! Tubing and ice skating are open as well.

Overall, it should be a great weekend for skiing and riding across the region. I wish I could go but I’ll be down in Charlotte and Winston Salem as I will be visiting some of my girlfriend’s famly.

Mike will be doing the reports over the weekend, so I will talk to you guys on Monday.