We’re Thawing Out From the Icebox That Was Friday 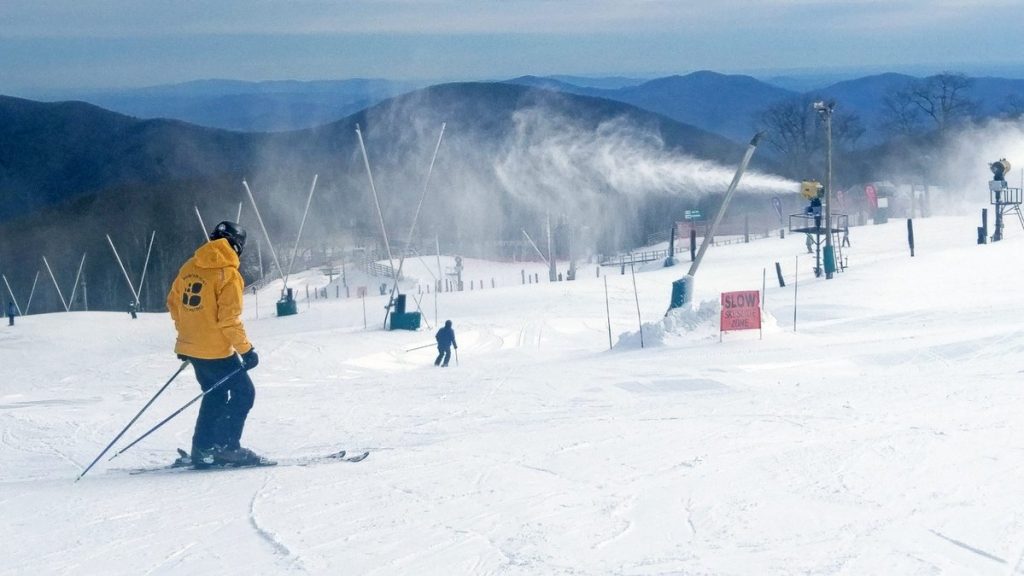 Whew was Friday cold!  It was one of the coldest days of the season thus far which means lots and lots of snowmaking took place.  I haven’t done the morning report in a couple weeks now (this is Kenny by the way), and I am pretty stoked on what I saw while doing the snow report just now.  I am a little ashamed to say that I didn’t realize we have 14 ski areas open for business now.  That’s awesome!

As mentioned, yesterday was bitterly cold, especially in the morning.  Today, we’re thawing out and temperatures are much warmer.  Canaan Valley and Timberline went from a minus 1 degree reading on the snow report yesterday to 40 degrees this morning.  That’s a pretty drastic change.  Elsewhere, most of the other resorts are seeing temps that are generally 25-30 degrees warmer.  Check out the weather station at Beech below.  You can see temperatures have actually been increasing overnight. 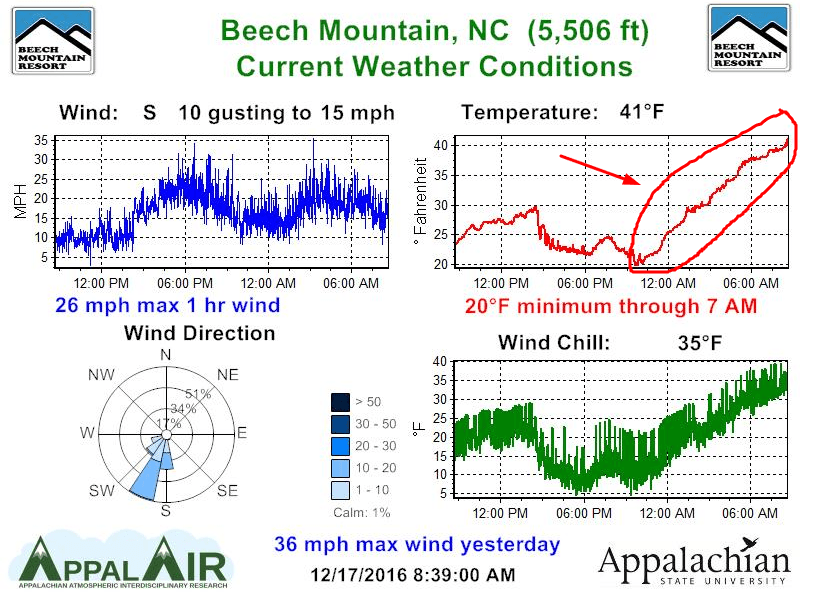 The Virginia resorts are actually the coldest spots this morning, which makes sense since we’re in a cold air damming event.  Bryce takes the cake this morning as they are at 28 degrees, the only resort that is sub freezing this AM.

Unfortunately, there is scattered drizzle/freezing rain/ice right now across the region.  The heaviest stuff is up into northern West Virginia and Maryland.  Wisp looks to be seeing the worst of it right now and they have a delayed opening due to the ice.  They even have “Icy” listed as their primary surface on the snow report.  No, seriously!  I can’t say I’ve ever seen that before.  The webcam image to the right is showing that they aren’t lying.

You’ll see on the snow report that only a few resorts are marked as having made snow.  This is a little misleading today due to the weird temperature swing overnight.  Many resorts have actually made snow over the past 24 hours, it’s just that they stopped doing so during the day on Friday.  Most ski areas base that stat on OVERNIGHT snowmaking, so that’s probably why it’s toggled off for a majority of them.  I know for a fact that I saw the guns on at a few places yesterday on the webcams.

Speaking of snowmaking guns, I feel like going on a mini rant right now.  It always happens around this time of year, but I see a lot of people on ski area’s social media pages complaining about the resorts making snow during operating hours.  I think it is dumb.  We all love snowmaking and without it we’d get far less of a season here, but we hate skiing/riding when the guns are on.  Let’s be honest, it does detract a bit from the experience.  But, it is NECESSARY.  Think about it this way, if a resort didn’t make snow during the day their snowmaking time would literally be cut in half.  HALF.  That is significant, especially early in the season when they are trying to build as big a base depth as possible and get as much terrain open as possible.  So think about that next time you get angry at a ski area for keeping the guns on during the day.  And don’t go on Facebook and give a resort a crappy 2 star rating simply because they did so!

Mike has done a good job this week of going over the weather outlook for the run up to Christmas (is it really only a week away?!), so I won’t rehash it too much.  Just know that the snow conditions for the holidays look to be pretty good.  Conditions won’t be all-time, they won’t be terrible, but they should be pretty good.  There will be snow on the slopes and plenty of terrain to be ridden.  I’m personally pumped as my fiancé and I will be at Snowshoe for the week after Christmas.

As for the weather, this weekend looks a little wet and dreary, especially tomorrow, but colder temperatures will return this week and we should see several nights of snowmaking.  Monday even looks like we could see around the clock snowmaking which is ever better!  Basically, the snowmakers should be able to do their thing.

For some perspective, last year at this time I was writing an article about how historically warm the month of December was.  The morning reports included the use of the word “bleak” in the title.  Some of the resorts even re-opened golf courses for the holidays because the slopes were closed!  I’m pretty sure only 1 or 2 resorts were even open for the holidays.  This season has been a slower start than some recent years and lacking in the way of natural snow, but it’s been so much better than last year.  So much.

Here’s a little state by state look at things right now.  For a complete look at stats and what not, head on over to the snow report page.

Every ski area is open in the state now as Sapphire Valley started turning the lifts yesterday.  I hate how they seem to be continuing the trend of reporting manmade snow as “New Snow” (they did not get 12-21″ of snow in the past 24 hours), but whatever I guess.  We’ll make sure to report it properly.

Ober Gatlinburg re-opened this week to the delight of many.  They will be skiing and riding on 5 trails today.  Tubing is open as well.

Finally, Wisp is open today but as mentioned earlier they have a delayed opening due to ice.  It took me so long to write this post though that by the time I publish it they will be open with 5 slopes and 4 lifts.

Most resorts are generally 25-50% open.  Look for that number to increase this week.  Hopefully anyways…

So that’s that.  Enjoy your Saturday and shoot me an email if you’d like at [email protected].

Previous Post
What Will The Conditions Be Like for the Christmas to New Year Week at the Ski Resorts? Click to see.
Next Post
A Bit of Rain to Snow; Mild temps to Cold and More Slopes and Trail Openings