We’re in the Homestretch Now 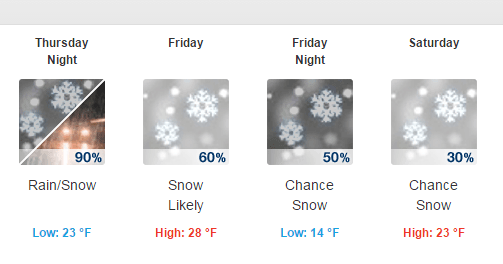 Not much has changed since yesterday at the five remaining open ski resorts in the region.  Sugar lost a few more trails but they still have double digit slopes open with 11.  Homestead lost a couple of trails as well and they announced a new closing date.  I’ll get to that in a minute.  Other than that, we’re looking at the exact same conditions this morning.  As a result, I’m going to keep things brief this morning as there’s not a lot going on.

It’s a chilly March morning with temperatures in the 30’s and low 40’s, but grey skies are prevalent at all five resorts.  That will continue throughout the day and there is a chance of scattered showers in the afternoon.  Tomorrow sees much of the same but temps will be 10 degrees or so warmer than today and the rain will be heavier. 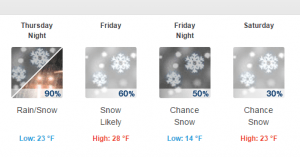 The forecast for Snowshoe looks good for Friday and Saturday!

We’re still on track for a little bit of snow Friday and Saturday.  It looks pretty minimal with an inch or two at best, but it will definitely add a little somethin’ somethin’ for the weekend.  It doesn’t look like we’ll have to worry about any slushy conditions for the most part as it’s going to be rather chilly for late March.  It’ll be a shock to the system as the temperature difference between Thursday and Saturday will be 25-30 degrees.  I’m contemplating going to App on Saturday and it’s going to be quite the change from this past Saturday where it was 60 degrees, sunny, and slushy.  It doesn’t look like it’s going to get above freezing this Saturday.

As I mentioned at the beginning of the report, The Homestead has announced a new closing date.  They had been saying that they would try and make it to next weekend, but I had a strong feeling that wouldn’t happen.  Sunday is their new closing date.  I got an email from them yesterday.

After one of our best ski seasons in recent years we will be closing the ski area and tubing for the 2014-2015 season at 4:30PM Sunday March 29th.  We would like to thank you for all your help in making this another successful season!

The currently have an offer running through Sunday where you can get a lift ticket and rentals for $30.  Not bad.

So come Monday I’m thinking we will have only Snowshoe operating on a daily schedule.  App will open up again next weekend for a final hurrah, and Sugar hasn’t announced anything yet but I’d be surprised if they stayed open past Sunday.  Such a bummer.  We really are in the homestretch of the season now.

Before I go, I wanted to share a video that popped up yesterday on many of the prominent snowboarding websites.  I saw that it was on Transworld and Snowboarder Magazine and it’s a part of the Snowboarding’s Dead series.  They came to North Carolina and spent a few days around here, getting a taste for what riding in the Southeast is like.  It’s pretty sweet.  Check it out below.