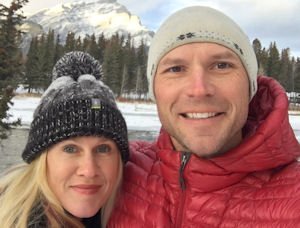 Rudy Ryback will be our new SkiSoutheast.com Snow Reporter and FirsTrax blogger Monday-Friday beginning Tuesday, December 3rd or so of next week.

Rudy really struck me as someone who has a real passion for the sport and industry as a whole. He and I kind of hit it off and I made the choice based on his enthusiasm, skills and interests he will bring to the team.

I’ll leave things to Rudy to share his version of our conversation when he introduces himself and takes on that role next week; however, when I shared the news that he was hired, he did share, “Oh man, my jaw just dropped to the floor. I am really excited and it’s kind of a dream to accept the offer.”

I personally like the fact that we’ll have another contributing style involved on the website which will simply give our readers more of a variety to enjoy. We think Rudy will be a great addition to the team.

A Bit About Rudy…

He’s a 37-year old, married, outdoor enthusiast, skier, snowboarder and telemark skier. As he put it to me, “Our mountains offer the opportunity to try it all and I just like mixing it up.”

Rudy rowed in high school at St. Louis Rowing and in college at the University of Colorado, Boulder. After graduating with two bachelors degrees in psychology and physiology, Rudy trained with the US Rowing High Performance team in the hopes of winning a seat on the US Men’s Lightweight National team. He has coached juniors at Community Rowing in Boston and St. Louis Rowing Club. For seven years he was the head coach at Washington University in St. Louis. Rudy has just completed his masters degree in sports management.

Rudy is a self-described, “voracious follower of Ski Southeast”, and was excited to see the position posted. He currently resides in Candler, NC and is a Rowing Coach for the Asheville Youth Rowing Association.

He shared, “Mike, I have had a passion for snow sports my whole life, and that fire continues to burn bright. Some of my most memorable days in High School were having study hall for the last class of the day, and skipping out to go to my local ski hill before rowing practice . . . pure bliss.”

While at the University of Colorado, Boulder he took his Nordic skiing background and became an alternate athlete on the National Championship Ski team. He shared, “It was quite an experience being one of the only Americans on a Scandinavian-based team!”

After graduating, he went back to his hometown of St. Louis, MO where he was a snow sports instructor for 6 years at Hidden Valley ski area and he shared that as “A great experience to share the gift of skiing and snowboarding with others.”

He then moved to Western NC where he averages about 30 days per year at the local ski spots Cataloochee, Wolf, Beech, and Sugar. He’s played at Wintergreen, Massanutten, and Snowshoe as well.

He also mentioned, “When the snow is ankle high, my wife and I try and get up to Roan Mountain or on the BRP for a little southern ski touring.”

As all of this related to his new position at SkiSoutheast, he wrote, “All of these rich ski experiences have really shaped me into a snow lover. Plus, my history of being a rower, and the disciple of waking up early is etched into me. I have really wanted to get into creating content for quite sometime now, and I feel that this would be a fantastic opportunity.”

Rudy already holds a GOLD CARD so he’ll be at all of the NC Ski areas as well.

He closed his comments by telling me, “Mike, (you guys) have built a true resource for the southeast skiing community . . . I look forward to join you and your team, learn from your wisdom, and impart my knowledge on the community.”

Yea, Rudy will be a nice fit to the team. Look for his stories beginning next week.