Guys this is a ski & snowboard website, but I can’t ignore the horror that happened overnight and the last 24 hours with severe storms, multiple tornados and the fact that 70-100 people lost their lives in Kentucky, Tennessee and other states last night. Our prayers are with those families and the emergency crews and responders. According to reports, one tornado ripped across 100 miles in four states. As many as 300,000 people are without power as of this post.

We May See Some Severe Weather and Straight-line Winds at Our Mountaintops Today.

Photo of the Day up top is compliments of Wintergreen Resort. More about them is a moment…

MUCH RESPECT to Snowshoe Mountain’s marketing crew this morning. They posted:

Let’s be honest – the weather today is going to be more wild than wonderful. By this afternoon it’s looking like wet and windy will be the more accurate alliterative description. Fear not, we plan to make the most of it and hope that you do too. Most folks are pleasantly surprised by the soft, playful snow conditions on a day like this but you will want some good waterproof gear to stay comfortable out there.

And if you’re just not feeling it, go ahead and get your après festivities started early at our new Hole in the Wall bar at the Shavers Center, or up at Hoot’s which is now open for the season.

Well said, Snowshoe. Speaking of après festivities, when the weather and conditions are not pristine…the off slope activities can be. All of the resorts in our region offer all sorts of things to keep us happy.

We can pray that today’s bad weather will only be some high winds here and there and a bit of underdeveloped snow (rain). Looking around at the region’s forecasts – it appears that we should see 15-25 mph winds with gusts to around 50 mph at many of our ski mountains. In terms of rain, it doesn’t look like much more than just just isolated and spotty showers – that could change over to SNOW this evening as temps nosedive to the mid 20s in the High Country of Western North Carolina, and as far north as Snowshoe Mountain, Canaan Valley and Timberline Mountain.

Widespread rainfall and isolated to scattered thunderstorms will develop ahead of the cold front. A few storms may become severe and produce damaging straight line winds.

The good news per the weather forecast is that today’s moisture doesn’t look like much, so conditions will quickly look better as snowmaking temperatures return tonight. It looks like we could see some snowmaking tonight and Sunday night, which will be welcomed by all. Also the forecast looks nice for the week ahead, although not cold, so this small window of snowmaking today through Sunday night will have to enough to keep things going until we get some consistent and cold air in place.

While we may see some snow showers this evening – those won’t be much in the way of accumulation and THAT brings me to some of your emails.

THIS IS WEEKEND FOUR OF THE SKI & SNOWBOARD SEASON…AND AT LEAST WE’RE OPEN!

A few of our readers chimed in to talk about the fact that while much of the country’s ski areas are still closed, we have TEN of our Southeast and mid-Atlantic’s ski areas open for skiing, snowboarding, ice skating and even snow tubing.

So I have a trip to Hartford CT next week and was hoping to get some skiing in (within a 2 hour drive). However I was disappointed to see that in CT and MA….there is only 1 ski area open. If you throw the 6 areas open in ALL of NY, then there are only 7 ski areas open in all of NY, CT, and MA combined. This is equal to the number of areas open in the SE as of today. Thats quite incredible if you think about it and once again shows how amazing our snowmaking operations are in the south.

As I looked around this morning, the temperatures at daybreak ranged from 46° (the cold spot) at Wintergreen Resort, to 48° at Beech Mountain, to 51° at Bryce Resort in Virginia, to 51° at Snowshoe Mountain, 56° at Canaan Valley & Timberline, to a balmy 63° and 64° at Sapphire Valley and Ober Gatlinburg.

As the capture to the right shows (click to enlarge it), the temps in Hickory, North Carolina at 5pm on Friday were colder than many of the ski mountains.

My husband and I are huge fans of skisoutheast and we have followed your website since the earliest days. Your website is the only place that documents all the snowfall for every resort. Have you guys ever seen it with this little snow this far into december?

Juliet – first – thank you for your comments and for making us a frequent stop for ski news. The answer to your question is, “I don’t think so.”

I started SkiNC / SkiSoutheast back in 1996 – and I moved to Seven Devils in 1990 and I can say that I don’t think I’ve ever seen this kind of snow drought in my time living here. I have brought the subject up with some oldtimers lately and a couple told me that back in the 1930s and 1940s there were some winters that were pretty mild. Of course, those same oldtimers seem to remember snow always being up to their armpits more often than not, so who knows how reliable those old guys are?!?!

Juliet is correct though – in that we DO document snow around here and here are the total accumulations to date for all of our Southeast and mid-Atlantic ski resorts – through this morning, December 11, 2021:

As you can see, Canaan Valley and Timberline lead the way with 12.2″ and believe it or not, according to Canaan Weather’s David Lesher, that foot of snow is the 4th lowest total in the past 21 years of his record keeping. By the way, at this date LAST season, Canaan had seen 18″ of snowfall. The lowest snowfall total through December 11th was in 2015 with 1″ of snow.

We can HOPE that we are only having a sluggish start like back in 2004-2005 when only four inches had fallen by now – and Canaan Valley ended up with 164″ (which is better than we saw last season and about their average snowfall for a season.) In case you’re wondering about the MOST snowfall to this date? That was by December 10th, 2008 when Canaan saw 63″.

There’s been many early season, snow droughts, so don’t get too concerned.

AND WE ARE NOT ALONE…

Hey guys, it is cool to see so many southern ski resorts open with the mild weather we’ve had. I was reading yesterday where Denver just saw its first snowfall of the season on December 10th. That broke an 87 year old record for the latest first snow. The previous record was November 21, 1934.

Thanks for that Jonathan. Crazy to think that our region saw its first snowfall back on November 2nd this season.

By the way, in Salt Lake City, Utah, they went through a snowless November for only the second time since 1976. The record? How about TWICE being on CHRISTMAS DAY in 1939 and 1943.

So, my friends, this has happened before. We can hope to see a pattern flip over the next week or two. Meteorologist Brad Panovich shared his latest Skier’s Forecast video and mentioned that a TON of cold air is bottled up in the Arctic. Check out that forecast:

For all of us who have Christmas ski trip plans for ski areas here in the Southeast, Brad did share that he feels like we will see more of the same kind of mild pattern between now and Christmas with quick shots of cold, followed by mild temps, followed by quick shots of cold… So we’ll have to put our faith in the awesome snowmakers of the region to make things as good as possible between now and then.

Brad did share that it looks like January will be much colder than we’ve seen in December.

I mentioned earlier that as of today, we now have TEN of our SIXTEEN ski areas open for skiing & snowboarding. Those ten resorts are playing on a combined 76 slopes. Not too shabby, considering all of the mild and wooly weather.

Top billing today needs to go to the Virginia ski areas of Massanutten, Wintergreen and Bryce as Massanutten and Wintergreen both have opening day weekends.

Opening day is here! They will be skiing and riding on Southern Comfort, Paul’s Way and Diamond Jim for the weekend. Early Season rates will be in effect. Snow tubing will be open from 9:00am – 5:00 pm on Sat and Sun. The current plan is to close Monday – Friday, Dec 13-17 and re-open for the season on Dec 18th weather permitting. No Intermediate terrain open today.

Wintergreen Resort is home to one of the world’s most sophisticated snowmaking systems. First installed during the 2002-2003 winter season and continuously upgraded, this state-of-the-art York® computerized snowmaking system gives Wintergreen the SNOWPOWER to consistently offer the Mid-Atlantic’s best skiing and snowboarding surfaces. Wintergreen is the only ski area on the East Coast to have 100 percent of its terrain covered by automated snowmaking.

Theoretically with optimal conditions, Wintergreen Resort’s snowmaking system could cover a football field with 37 feet of snow in just 24 hours.

The snowmaking team went to work Wednesday-Thursday and had a productive night so we will be OPEN again this Saturday and Sunday. Trails open for the weekend will be Red Eye, Bootlegger, Little Nip, and Bunny Slope. Tubing will also be open. Refer to our Early Season Hours for this weekend. We will remain on a weekends only schedule until the holidays. Keep your fingers crossed for more winter weather!

A bit of snow fell in West Virginia. Here is a video from Canaan Valley Resort!

MASSANUTTEN REMINDS US TO THANK A SNOWMAKER!

Are you visiting a ski area today or this weekend? Thank a snowmaker! Massanutten Resort provides us an inside look at snowmaking that happened there this week.

I’ve dealt with the Anders family for more than two decades and Kent Anders and his team at Ober have been pulling out every trick in the magic arsenal with making snow – not only for their tubing park – which can open in the summer! The recent “Back in Blue Rail  Jam” showed off some of their amazing prowess in being able to make enough snow when temperatures have not even been in the 30s – to pull off that event. Check out the photo below.

Ober continues to offer snow tubing, ice skating and an ambience second to none in the region…even when skiing and snowboarding is not yet possible until cold air hits in the Smokies.

Twister is open! I quickly fell in love with that trail last March. Good grief, what a fun, glide run.

HERE ARE SOME OF THE SWEETER PHOTO SHARES: 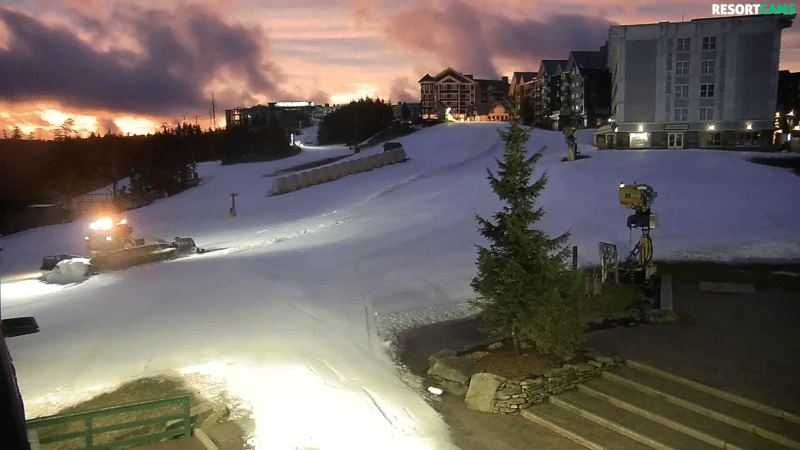 Always a sweet, morning shot. This was from Snowshoe Mountain this morning as the grooming crew was out, laying some corduroy for early skiers and riders.

Previous Post
WINTERGREEN RESORT OPENS FOR A WINTER PREVIEW THIS WEEKEND
Next Post
A Sunny, Chilly Sunday on Tap at the Slopes!