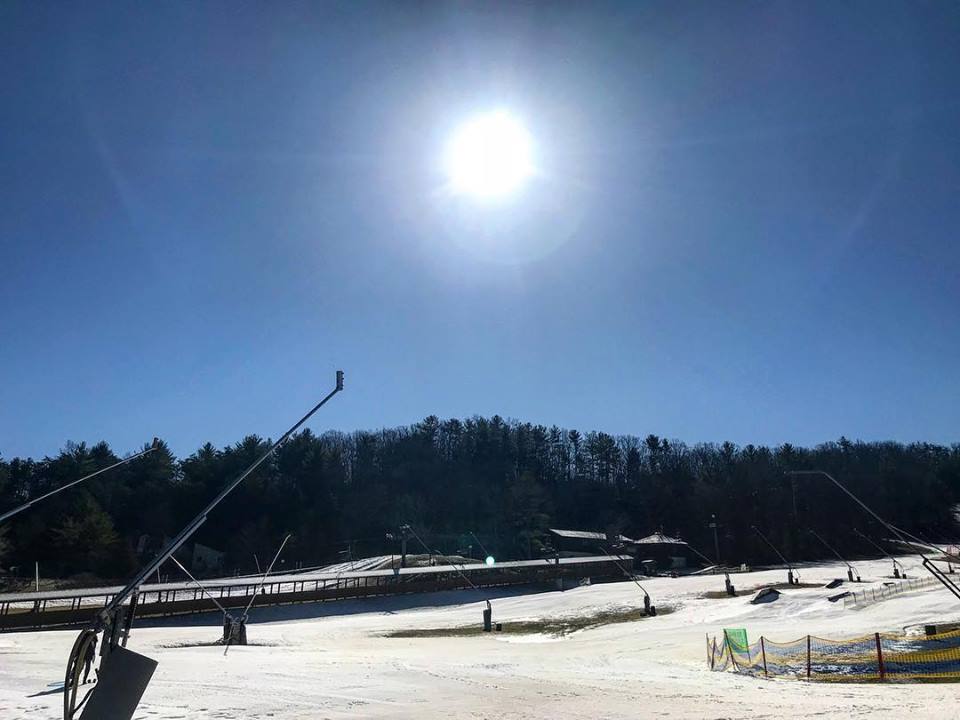 The euphoria of Monday night’s snowmaking has disappeared for the time being.  It was a beautiful day yesterday with cooler temps and bluebird conditions but grey skies have returned this morning ahead of our next weather maker.  Rain has already moved into the southern part of the region and will stick around for most of the day.  Folks making some turns at Cat, Sugar, or App today will want to make sure they have some rain gear on.

The underdeveloped snow becomes more widespread tonight and tomorrow as all of the resorts will see precip of the liquid kind.  And this concludes the bad part of the forecast.  The good news is that we’re still on track to see the return of colder air for the weekend.  Nighttime snowmaking should be feasible for all of the remaining open ski areas on Friday night and Saturday night.  That said, the next two days of rain is definitely going to complicate things for some of those remaining ski areas.  To be honest, I’m highly interested to see how the snow holds up between now and Friday and if it’ll be worth it for some resorts to turn the guns back on this weekend.

Some snow remains a good possibility for the West Virginia ski areas as well.  Panovich and I have both talked about it the last few days and Thursday night through Friday night still looks like a snowy time period for Canaan, Timberline, Snowshoe, and Wisp.  The National Weather Service is being pretty conservative right now with their forecast amounts but the potential is there for more.  Here’s some of the wording in their forecast discussion this morning.

I feel like we’ve had a lot of these type of systems move through the region this winter where the forecast was on the lower end of the spectrum but it ended up overachieving.  Let’s hope that’s the case once again this time around.

A Visual Look Back at Beech’s Season

I made a little timelapse showing the entirety of Beech Mountain Resort’s season.  They closed this past weekend and I was able to use images from the base cam that were taken every so often from November all the way up until yesterday.  It’s pretty cool to look at the changing conditions throughout the winter.  You can also see that the switch was flipped off a week into February.

David McCue sent in his latest article yesterday and it’s a doozy.  Make sure you have a few minutes to sit down and read it.  He traveled to a few resorts out west and scored some big time pow.  Here I am all excited about a few inches of snow at Snowshoe and he sends in some pics that show DEEP snowpacks.

That’s it for today.  It’s a short post I know but there’s not too much going on right now.  We’re all just waiting for the return of winter on Friday.  As for Friday, that’ll be the first day of our Ski Southeast Summit at Snowshoe.  If you haven’t made plans yet to join us, what are you doing?  It’s going to be an awesome weekend and it looks like the weather is going to cooperate.  If you can’t join us, try and at least make some turns somewhere else!  You never know how much longer we have.