We are Wearing our Rally Caps today! THINK COLD!

WOW! That’s about the only thing I can think to say. It’s Christmas Eve, EVE, December 23rd and from Virginia – south things look a lot like mid April when all of the snow from the previous season is melting away and only a sporadic mound or two of snow is on the slopes. Kenny Griffin has been doing an admirable job of sharing the bad news so far this season as there’s just NOT been much to write home (or anywhere else) about. We’ve been doing a LOT of new setups for cameras and stuff and I’ve been busy on the revenue side of things. I had a chance to look around the region a little yesterday and good gracious did the slopes look p-r-e-t-t-y bad in Virginia, Tennessee and North Carolina. 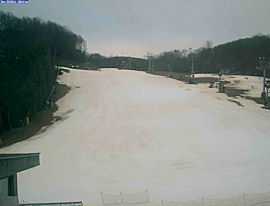 <Cat looking a little discolored but pretty good this morning.

After an INCH or more of rain late on Thursday and overnight last night – they look even worse. Cataloochee Ski Area actually surprised me a little as they are holding up perhaps the best of the North Carolina resorts. That only surprises me because typically it’s a bit colder around Sugar and Beech, allowing slopes to hold up a little better when the weather goes south. However CAT looks pretty decent.

I know that everyone is searching for the same answers to the questions of "when will we get some cold and snow?"; "Which resort looks the best right now?"…

Several calls from lodging people to ski area management people came into my office on Thursday and all of the conversations started the same way. "Mike, tell me you’re seeing some cold air coming?!?!"

We’re going to throw some rally caps on this morning and see if by changing things up a little we can inspire some winter weather to come our way. My youngest daughter, Madison and I hit up Lowes Hardware this week for a sizable piece of weather treated plywood. We spent a good bit of time cutting out a new, five foot tall snowman. We’ve painted him up and today we will be adding the measuring lines up his entire length. We’re hoping that at some point this season we see snow at least halfway up his three-foot-wide belly! We’ll post some images of him Saturday.

Another change today is that we’re going to report the conditions around the region in the order of who has the most and best terrain open.

Before we get to that, let’s talk weather. Today is December 23rd and a LOT of people are packing up their vehicles in hopes that they get to head to their favorite mountain getaway and do more than bowling for the next week. The question of today is:

According to NOAA, Snowshoe and the WV resorts are looking at some chances for snow today and Sunday night. Lows tonight up that way are forecasted to dip to 19°! SNOWMAKING BABY! Here’s the forecast for up that way for the next several days:

So from NOW through January 1st the WV and Maryland resorts are looking at pretty favorable conditions for making snow on SEVEN or EIGHT of those nights with some mentions of snow showers. There’s a chance those snow showers could be a little wetter than fully frozen as we look toward next weekend.

VIRGINIA FORECAST (Based on Bryce Resort):

Things look fairly dry until next weekend but there’s also not much in the way of real hope for snowmaking at the Virginia ski areas. There may be 1-3 nights where some snow could be made and that is stretching it.

Things should be pretty fair for the most part this week with a few showers coming in on Tuesday and again into next weekend. Sunday night MIGHT be a snowmaking night but things look borderline for snowmaking really all week. That really doesn’t bode well for any of the ski areas because things are so sketchy already. There may be 1-2 nights where the NC resorts can make snow.

All we can do is report WHAT IS and WHAT MAY BE and leave it to you guys.

The quick summary is that things are just going to be not so good from Virginia south in terms of being able to go play in some pristine snow. What the resorts have open right now in Virginia and North Carolina is the MOST they’ll have unless some freak cold hits. We may even see some resort closures of those that are open right now.

The West Virginia and Maryland ski areas are faring better and although not what we’d call pristine conditions…they will be able to make snow possibly on each of the next SEVEN nights as temps are forecasted to be in the mid 20s tonight through Thursday night.

WHO HAS WHAT OPEN TODAY…

As promised, let’s take it from the most to the least…

The West Virginia ski areas are actually o-k-a-y as they’ve had slightly better temps. Snowshoe Mountain actually ADDED another trail opening this morning to take them to 29 trails open for day sessions and they have 8 trails open on the Silver Creek side of the mountain for day and night sessions. With tonight’s snowmaking and snowmaking chances for several nights in a row, Snowshoe will probably get more than half their terrain open any day now.

Snowshoe Mountain Resort is incredibly opening trails in these conditions! They increased to 29 trails open for day sessions as well as open terrain at Silver Creek for night sessions. Tubing is open as well!

THERE’S A HUGE DROP FROM HERE…

The NEXT, most trails open at any resort in the region is at Cataloochee Ski Area in Maggie Valley. Catalooche Ski Area – 6 trails open with a base of 16-34". I mentioned earlier that they look surprisingly decent today. 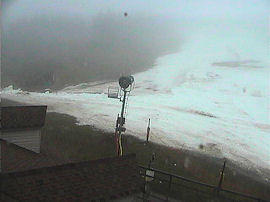 <The base cam at Beech Mountain is the only one you can see anything on and things don’t look so good. There’s at least decent coverage to ride on though!

Beech Mountain Resort in North Carolina and Canaan Valley Resort in West Virginia come in next with 5 trails open.

Beech Mountain Resort – 5 trails open with Upper and Lower Shawneehaw both offering skiing and riding from the top of the mountain. Ice skating is open as well.

Canaan Valley Resort is open for day sessions with 5 trails including the black diamond – Face! Tubing should open Saturday. 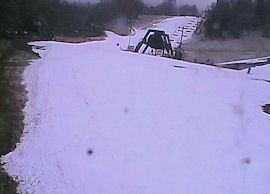 Canaan looks pretty decent this AM and more snowmaking is on the way!>>

Canaan Valley got opened up yesterday and they look good with a 12-24" base and even have "FACE", one of the black diamond trails open.

Bryce Resort in Virginia, Timberline Resort in West Virginia and Wisp Resort in Maryland are next with 4 trails open at each location. 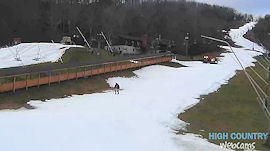 <Bryce looks like they are providing decent side to side coverage right now!

I spoke briefly with Horst Locher this morning at Bryce Resort and he told me that they were holding up with 4 trails open today.

Timberline Resort is playing on 4 trails and an average base of 37".

Wisp Resort is reporting 4 trails open til 9pm and skating and mountain coastering as well as skating. They have an arsenal of groomers and they are reporting freshly groomed trails for this morning.

(Wisp and Timberline should get in some more snowmaking over the next few days and see more trails opening.)

Wintergreen Resort in Virginia and Appalachian Ski Mountain in North Carolina are NEXT with 3 trails open at each ski area. 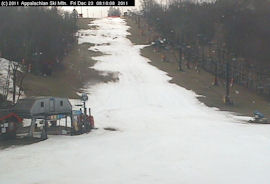 <App is only open from Lower Appal down.

Wintergreen Resort cut things in half – and now have 3 trails open for day sessions. They wrote, "Operating update: We will operate for DAY SESSIONS ONLY Thursday 12/22, Friday 12/23 and Saturday 12/24. The Plunge Tube Park will operate with limited sessions." 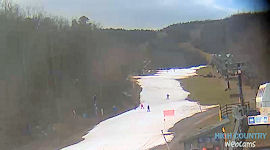 Massanutten Resort in Virginia and Sugar Mountain in North Carolina come next with 2 trails open. I have to be honest and say that Massanutten’s two open trails offer pretty decent coverage.

Not so much at Sugar Mountain which unless some snowmaking happens tonight COULD be closed on Saturday and Sunday. This is educated speculation – ONLY so call ahead.

<Sugar IS advising people to go have a look before buying a liftie.

Sugar Mountain is down from 6 trails open on Thursday to only TWO today from the 3/4th station and a base of 6-18". Ice skating is open.

Massanutten Resort is fighting the fight to remain open but barely. They only have 2 trails open for day sessions right now and 6 lanes of tubing. 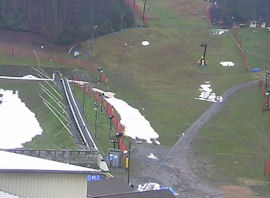 This shot at Ober this morning shows very little in the way of snow on the slopes!>>>

Ober Gatlinburg is looking like they’re ready to get things cranked up for their all-important SUMMER season as there’s nearly no snow to be found on their hill. They, like everybody else are waiting on cold temps. They’ve had less than anyone in that department and simply have only had a couple of occasions to make snow.

I don’t think I’ve ever seen a 4-12" base at App on December 23rd. I’m sure it has probably happened…just not in my time of covering things.

Things are pretty patchy at several of the open ski areas but ONLY Sugar Mountain is reporting "bare pots and thin coverage". HATS OFF to Gunther and their marketing department for telling it like it is. Every resort has them, but only they are reporting them.

Sugar’s webpage declares, "We’re Open!" Whew – I’m not so sure they should be. Give them credit though – if you want to ride the hill, you can.

I’ve spoken from time to time with the management peeps at Beech about promoting Beech Mountain instead of Ski Beech. Beech Mountain Resort is officially they’re name after a change that took place last season. Beech is the old, glory days name that old timers will appreciate. So that’s kind of cool. I had to chuckle a bit as I drove Hwy 184 the other day. As you get close to the entrance of Sugar Mountain there is a new billboard that Beech has posted up that says:

Ski From the Top by Way of NC’s Fastest Lift!

I’m certain that rankles some feathers at Sugar since they have probably the slowest lift to the top of any resort anywhere. You have to hand it to Beech though for recognizing any advantage they can accentuate and marketing it. Sugar has some advantages of their own that they can sell, but we’ll leave that to them to do since they aren’t a part of our promotions.

I guess that’s it for today peeps! MAN WE need to be thinking COLD AND SNOW. If you wear a cap, flip the darn thing around. We need some rallying. If you’re a prayerful sort, we need that. It appears that at BEST, most every resort will see a Christmas to New Year’s week that will end up being anywhere from 50-80% off in terms of ski visits – with some 100% off at some areas that won’t even be open. Let’s pray for some cold and snow so that these ski areas can take advantage of the pent up desire to ride some snow – very soon. If things can get going after the first of the year, we’ll be fine.

Have a nice day and we’ll update you again in the morning.