Warmer this morning, but will not last.

The temperatures are quite a bit warmer this morning compared to mornings past.  Appalachian Ski Mountain was reporting 40 degrees this morning when I updated the ski report.  However, this will not last and as a matter of fact, I believe we’ve already hit the high for today.  Taking another quick look at App, they are currently reporting 39 at the summit, so temps are starting to fall.

We have our next cold front moving into the area quickly today.  Wisp is already getting snow this morning, with reports of heavy snow starting to come in.  There are a number of alerts out there today for the Southeast and Mid-Atlantic resorts.

Wisp has been issued a Wind Chill Advisory from noon today until 12am on Tuesday, and then a Wind Chill Warning from 12am Tuesday until 1pm on Tuesday.  They are currently under a Winter Weather Advisory until 7pm this evening, and could see another 2-4 inches of snow. 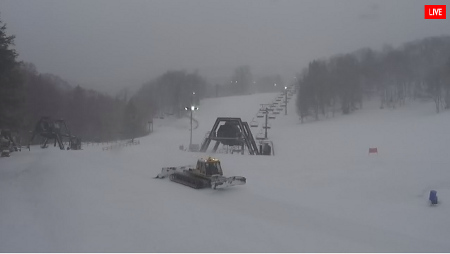 Snowshoe has a Wind Chill Warning starting at 5pm this evening and going until 1pm on Tuesday.  They are currently under a Winter Weather Advisory as well until 4pm this afternoon and can expect up to 2” of natural snow.

Our final West Virginia resort has been issued a Wind Chill Advisory starting at 6pm this evening and going until noon tomorrow. 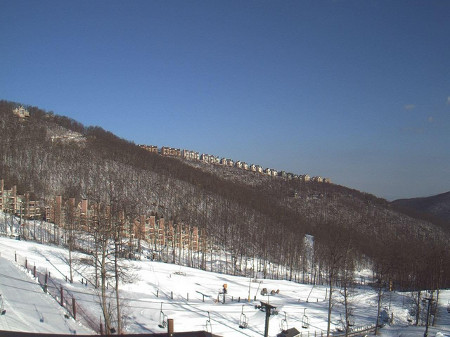 Blue Skies at Wintergreen this morning

All of our resorts, Appalachian, Beech, and Sugar have a Wind Chill Advisory starting at 6pm today and going until noon tomorrow.  Beech and Sugar also have a Freezing Rain Advisory today until noon.  Expecting just a trace of ice accumulation. 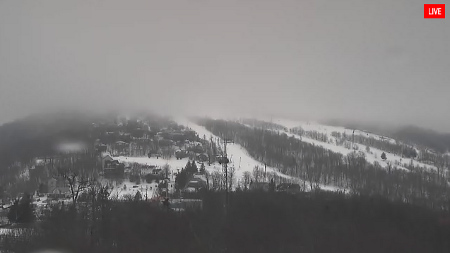 Beech is socked in

Both Cataloochee and Wolf have also been issued a Freezing Rain Advisory until noon today.  Again, just a trace of ice accumulation is expected

Wolf Ridge – hard to see in pic, but they are getting snow this morning

Ober has 2 Alerts and 1 Statement this morning.  A Wind Chill Advisory starting at 11pm tonight and going until 10am on Tuesday.  They are under a Freezing Rain Advisory until 10am this morning.  They also have the following Special Weather Statement:

A STRONG COLD FRONT WILL MOVE THROUGH THE SOUTHERN APPALACHIANS EARLY TODAY. ABOVE FREEZING TEMPERATURES WILL RAPIDLY FALL INTO THE 20S THIS AFTERNOON. LIGHT RAIN WILL CHANGE TO SNOW ACROSS MUCH OF THE AREA THIS MORNING AS THE FRONT MOVES INTO THE MOUNTAINS. NORTHWEST WINDS WILL BECOME BRISK BEHIND THE FRONT. WIND CHILL VALUES WILL DROP INTO THE TEENS LATER THIS AFTERNOON. OVERNIGHT LOWS IN THE TEENS AND THE SINGLE DIGIT WILL BE COMMON. WIND CHILLS WILL FALL TO NEAR ZERO OR BELOW ZERO ACROSS THE REGION OVERNIGHT. 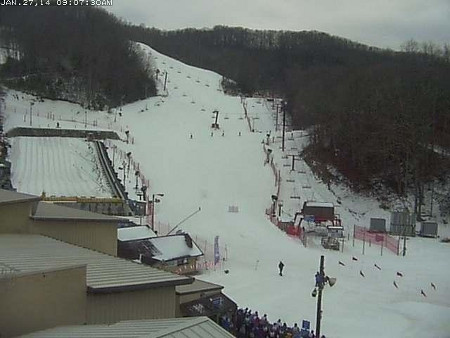 This is going to be a rather interesting storm and couple of days for the Southeast.  Starting late tomorrow and going through Wednesday, we could see a wintery mix along the North Carolina coast.  There’s even a chance of up to a foot of snow. 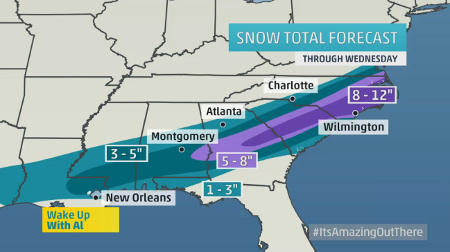 This is just crazy.  I expect some of our coastal SkiSoutheasters to upload their trip reports of Wilmington, Wrightsville Beach, and Cape Hatteras.  A nice swooshy, powder face, turn around one of the light houses would be epic.

Speaking of trip reports, our buddy Kenny made it up to Beech on Saturday and took in the goodness it had to offer.  We are still very much in the planning phase and should nail down the details this week – how about a summit up at Beech the weekend of February 28 – March 2nd?

Previous Post
More natural snow at Snowshoe last night.
Next Post
The Next Arctic Front is Upon Us