Waiting on Cold Weather…and that first Snowfall of the Season 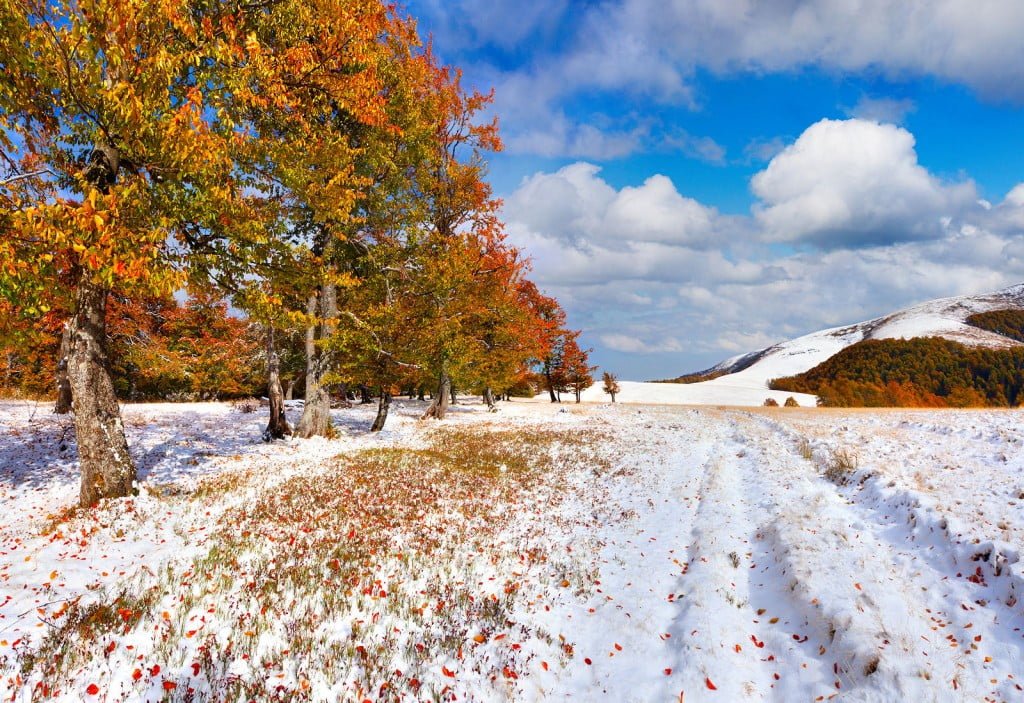 We’re getting a lot of emails asking us when the resorts will begin making snow. Others are asking when that first snowfall of the season will come. Typically we’ll get reports of that first dusting of snow around Canaan Valley, Snowshoe or Timberline Resorts in West Virginia. Sometimes it will be atop Beech Mountain, North Carolina’s 5506′ elevations. It typically happens in late October…but it’s looking more like mid November right now.

I can’t tell you how many times over the years that I’ve overheard visitors marveling about an October snowfall. Several Autumns back – my brother, a couple of really good friends and I had setup a round of golf up at the old Hawksnest Golf & Ski Resort on top of Seven Devils, North Carolina. For those of you who are not familiar with Seven Devils or Hawksnest – it is a cool, little town/community located off of Highway 105 between Boone and Banner Elk. The town used to be home to one of the coolest golf courses and most unique ski areas around. Top elevations at Hawksnest were around 5,200′ and the golf course meandered down from that but still remained above 4200′.

Anyway – it was a typical mid-October morning with temps around 55° and the weather forecast promised us a chilly day of golf, but with highs around 60°. We were stoked. Autumn leaves were particularly gorgeous that Fall and the sun was brilliant and felt warm on your shoulders – even on this chilly mountain morning.

We played the first couple of holes that morning and all of noticed a slight dip in temperatures. I remember someone saying that they might need a jacket if it got any chillier. Just a couple of holes later it clouded up and began to sleet. The sleet quickly changed over to light snow and then within minutes it was snowing as hard as I’ve seen it snow during a December snow storm.

We abandoned our round of golf and as we made it back to the clubhouse and home. We were new to living on Seven Devils at that time and remember the joy of that first October snowfall. Flatlanders rarely experience that weather event – of seeing gorgeous Autumn leaves, blanketed by a few inches of early-season, October snow.

When Might We See That First Snowfall of the Season

It won’t surprise us to receive a report from up in Pocahontas of Tucker County, West Virginia about a dusting of early snow – any day now. However, if the forecast holds (and we don’t get one of those surprise dives in temperatures) things look to be pretty non-eventful if you’re hoping for snow – at least until around mid-November.

We’ve gotten tons of rain in the last few weeks. After heavy rains and flooding a few weeks ago and then another round of moderate-to-heavy rains over the last few days – the ponds, lakes and snow-making-holding-reservoirs are all full and ready to contribute to making the slopes ready for us to enjoy.

Now we’re just waiting for those cold temps. As the forecast reads right now – those kinds of temperatures might not come until the more traditional, opening dates of Thanksgiving. That’s no big deal really, as typically only Sugar Mountain and Cataloochee Ski Area (both in North Carolina) tend to make snow and open sooner than that.

As you can tell by the tables shared below – we are in the midst of some milder-than-normal temps right now. The first chart is for Snowshoe Mountain. Notice the 12° record low back in 1976 compared to yesterday’s 43° low temp. Also notice the 3.05″ of rainfall. THAT should have Shavers Lake filled to the brim awaiting massive snowmaking ops.

Right now – the long range forecast seems to indicate a CHANCE for some snow flurries around the 12th of November but even that is sketchy. We’re not seeing consistent, cold temps even during that week. That could indicate that we are indeed looking at a late-November, early-December start to the 2015-2016 ski and snowboarding season around the Southeast and mid-Atlantic.

Take this time to get yourself in shape and tune up those skis and snowboards.