A VISIT TO THE LOCAL SKI SHOP 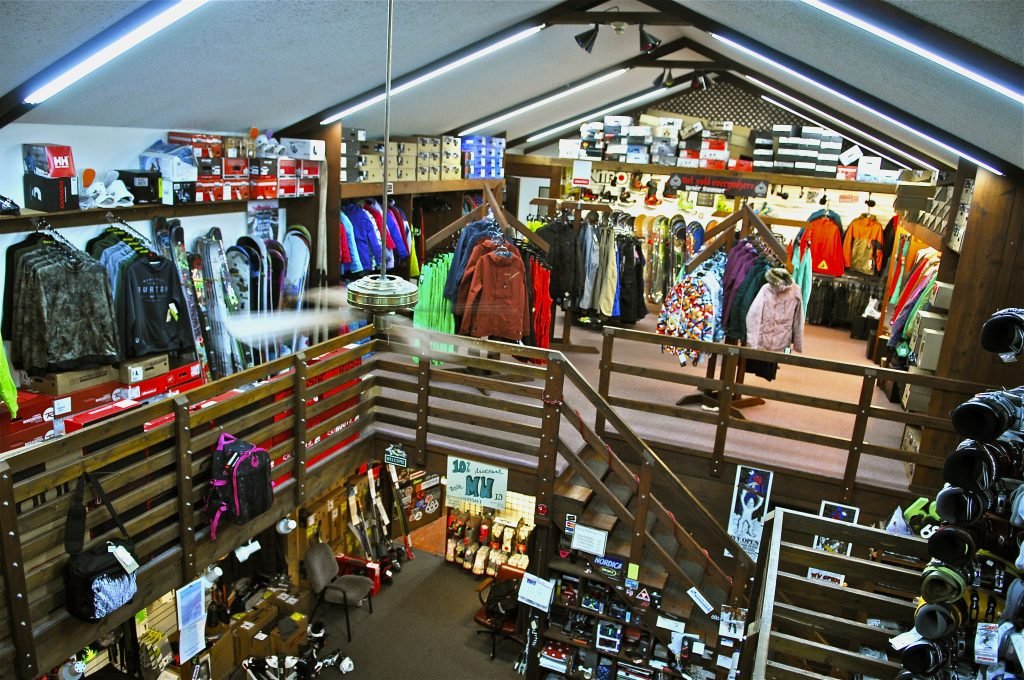 This past Saturday, I chauffeured by son Christian to the Huntington Mall so that he could interview the Manager of the Cincinnati Reds Bryan Price for his sports column he writes for the Charleston Gazette-Mail. While we were in the neighborhood (so to speak), we also decided to stop in and see the guys at the only locally own and operated ski shop, The Ski Loft, in Barboursville, West Virginia, to see how things were going this season from the retail front.

These guys have been in the ski business since 1978, so I always enjoy stopping by a few times a season, just to catch up on the whys and wherefores from that side of the snow sports industry. The weather during our visit was basically overcast, with the chance of some “underdeveloped snow” (which later came during the evening) and temperatures in the low 60’s. Some may say, not the best day to be talking skiing and snowboarding. But not with these guys as they will talk about the ins and outs of the industry on any day that ends in a Y.

As mentioned earlier Christian was with me for the visit and he was sporting his Winterplace beanie and was asked how many times he had been on the slopes so far this year. He quickly responded by saying six, three days at Winterplace and three days at Snowshoe Mountain. They were interested in what he thought the conditions have been so far this season and if he was having fun? My point here is that, the guys weren’t worried about selling something, they wanted the inside scoop from the eyes of a 13-year old about what was going on. That’s what you get when you visit and shop at a locally owned ski shop, you get feel, taste, touch service. They made Christian feel really good about playing in the snow, not what he wanted off the rack. You don’t stay in this business for nearly 40-years without that type of attitude, I am here to say.

Okay, enough about that, what I was glad to hear was the fact they were having a very good year so far this season. Hoping I knew the answer to why, I still decided to ask the question of why they thought was the reason for the uptick in business this year. I was not surprised at all and like I said was basically expecting the answer of, “the weather”. I was told, plain and simple, this winter’s cold temperatures have kept their doors opening and closing with customers. That was music to my ears as if folks are buying new equipment from gloves to skis and boards, well they are going to need a place to play with them and that’s the slopes and trails in the southeast region.

We all agreed, you can have the best marketing material out there, but at the end of the day, when it’s cold or it’s snowing, the doors are opening, and the phones are ringing. Hey, don’t forget this was also on a day with temperatures in the 60’s so folks are not forgetting the cold temperatures from just a few days ago and that’s a good thing.

You don’t stay in this business for 40-years without staying informed and with that said I was glad to hear they use the webcam page on Skisoutheast.com all the time to check out the conditions at all the resorts in the region. By doing so, they feel comfortable when they are telling a customer this or that about what they could expect when heading to their favorite ski resort in the southeast. Have I told you lately this is what I love about a locally owned and operated ski shop. You just don’t find this type of atmosphere at the big box stores or online. You just don’t. I know, you might save a dollar or two, by going to those stores that have a huge inventory and can undercut the mom and pop stores, but you won’t get that feel, taste and touch type of service. At the end of the day, when I spend an extra dollar or two at the local shop, I feel good about it, I really do, but then again, I have been going to local shops since 1985, so I don’t know any better.

I should’ve mentioned this earlier in the column, all of this talk was going on while Christian was petting the shop dog, the son of the owner was tuning some skis in the back and the owner and I were sitting on a couple of boot fitting chairs. The only thing missing was a potbelly stove, keeping the shop warm. It had the General Store type of feel that I must get a dose of at least two or three times a year. Yes, besides petting the dog, Christian was checking out all the latest gear and I know with somebody’s birthday coming around, well you know this is going to happen.

Like I said, they weren’t worried what or if we were going to purchase something, they seemed more concerned how Christian was liking the sport. They remembered us coming in three seasons ago to purchase his first gear and he was getting ready for his first ski club trip. It was fun to hear the tone of his voice pick up when he was describing his most recent ski lessons where he was being taught to get up on his ski and make that sharp edge carving turn. But it also was cool, when they talked to him about the art of snowmaking and he stayed with them, step for step. Okay, he has heard me talked about it a few thousand times, so he has had some influence, but none the less, it was just fun to listen to.

So, the moral of this column this week is, if you get a chance to stop by your local ski shop, do so, you won’t regret it and it might just put a smile on your face and get you pumped as you plan your next visit to your favorite ski resort. It did for me, that’s for sure.