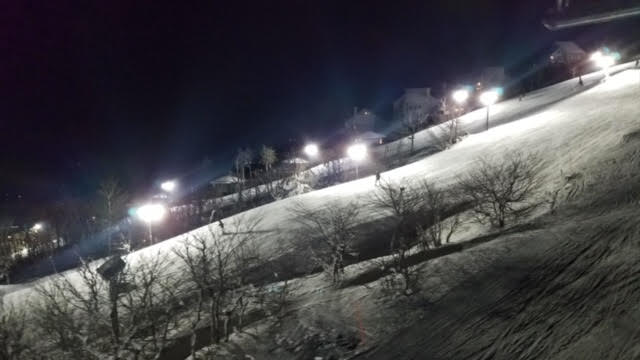 Hello skiers and riders of the southeast, and wow what a wonderful time it is to be here today.

We are off to a very terrific start this season in which the cold and snow has been present, persistent, and plentiful.  It looks like most resorts are at or near 100% open on the trail report, and that includes destinations such as Appalachian, Cataloochee, and Snowshoe.  Other places are almost there, and I can assure you that they will do all they can to be there soon.  Nonetheless the scenery all around is wintery so hopefully you are taking advantage of it.

That last truth is not unexpected, but it is not consistent either.  What can be expected every day however is that our big fiery ball in the sky will settle beyond the western horizon somewhere and promptly ushers in nighttime. Fortunately for us in 2021 we are many generations removed from when mankind figured out alternative forms of illumination and that means the lifts do not have to stop spinning. Night skiing and riding is a herald tradition, and according to a Google search that led to Wikipedia, it originally began way back in 1936 at Bosquet Ski Area from Massachusetts in which they had flood lights and a partnership with General Electric.

Talk about a bright idea.

Nowadays, I mean nights, the technology is much better, and the visibility is very enlightening. There is something to be said about participating in any sport under the lights, but doing so while the temps are below freezing and the conditions are above par is unique.  Add in a very affordable lift ticket rate and you could be part of an energetic experience. 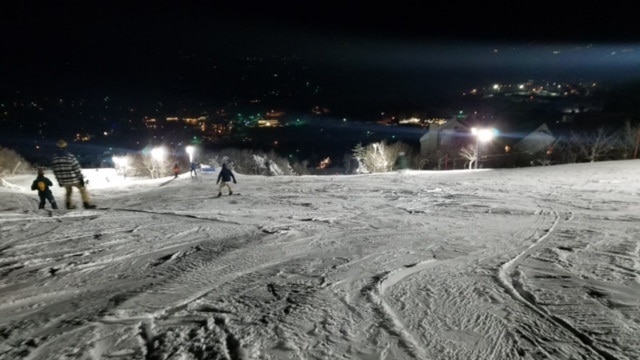 I chose to partake on such a trip to Beech Mountain Resort the other night, and I can report that I was not alone. Their night session times are from 5 PM to 9 PM and tickets can be bought online or at the ticket booths. Each week between now and March 4th they have a recurring $15 night ski lift ticket for men on Wednesday nights followed by giving women the same discounted cost on Thursday nights.

If you are 70 years or older you can disregard those prices at any time day or night, because your lift ticket price is free.

Upon arrival at the parking lot, I could tell that they had been having a busy day already.  Open parking spaces were scarce, and the foot traffic was busy too. This was amplified further when walking to Lift #5 and seeing a line of people on both sides of the loading zone.

Little did I know that this was more of a mirage because I never waited more than five minutes to take a ride up. Smaller crowds have always been the case for night skiing, but that does not fully explain why the wait in line was hardly anything. This is due in part to the eagerness of the everyone wanting to take another ride up, some of which went for the more “free for all style” to get on the lift, but also because they have other lifts open through that spread the crowd around.  Those lifts were #1, #4, and the Park Tow Rope.

It was obvious why we wanted to be there and do this, because there was complete coverage, little to no wind, and the snow guns were turned off.  The trails illuminated from the glow of the man-made brightness, and the constellations of the night sky were in full visibility while riding up.

People were flying down the runs as multiple cheers, woo-hoos, and screams of happiness were bellowed throughout.  I got to hand it to the skiers and riders at Beech, especially the younger crowd, because they displayed a lot of skill and creativity while descending to the base.  It is obvious that a lot of folks have confidence in themselves and are capable of taking on the challenges they face head on.

The open runs themselves had deep bases, a nice layer to glide upon, and a tad bit of ice underneath which aided in extra velocity.  If you wax your gear, please note that the snow was well suited for mid temp or universal. I saw a few riders holding up their boards so that the bottom was visible, and it was apparent that they could use a fresh application to not only aide in the shoosh, but also eliminate the dried-out appearance.

Be sure to have the edges sharpened too, because that thin ice was enough to put yours truly on the ground suddenly. The closed areas near the lift towers, snow guns, a creek, and other hazards had a layer of powder that some poachers had tracked through, but please resist the temptation to do so.  It is not worth it to get caught or worse. 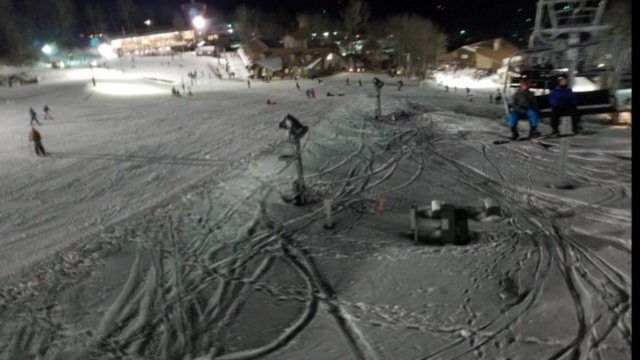 Beech Mountain is also open 100% during daytime hours currently, which also means that they have every run dotted with lights open too.

The temperatures were in the mid-20’s and all that required was one extra layer of clothing underneath to keep a comfortable feeling.  I have fleece lined sweatshirts and sweatpants for this situation, and I choose mittens over gloves because they seem to perform better in most cases.

From the summit you can make your pick from Shawneehaw, Robbins Run, and the classic steep White Lightning.  Further down you have Crossover, Powder Bowl, Freestyle, and the terrain park available.

There were a few folks venturing off to the edges of these trails to hit the random jumps, bumps, and boulders.  Beneath Lift #5 I saw a few brave souls going for greatness on some of the most challenging terrain this entire region has to offer while passengers from above cheered them on.

These are but a few of the key ingredients that makes night skiing enjoyable.  Another component was the people and opportunities to learn something about them.  I shared multiple conversations with a wide variety of people from all over the planet.  This included the fellow originally from Hungary, the young lad from Wilmington that enjoys skateboarding and snowboarding, and also the gentleman originally from California that rocked the mid-80s Rossignol skis which were not wide, parabolic, or twin tipped at all. For those of you who are trivial, I found out that skiing in Hungarian is spelled sieles, but is phonetically pronounced she-aew-kneesh. 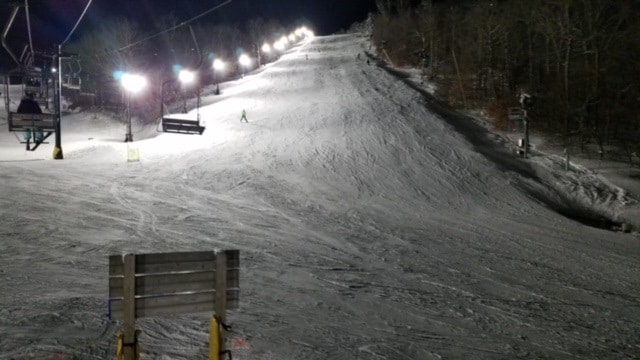 There was also a family from Tennessee enjoying a quick 48-hour adventure while also celebrating a birthday. The mother, Misty, said that they go every year as a family tradition, sometimes in a different direction to Indiana, but they were fully impressed by Beech Mountain and glad they made this choice.  I would agree that they chose wisely, and I hope Nina had a happy birthday, because moments like that at places like this come with the most value.

With all things they eventually come to an end, which means either lodging nearby or taking a drive to wherever home is.  Multiple places like Beech, Wintergreen, and Snowshoe have steep windy roads that lead back to the highways, and it is always best to make sure your vehicle comes with either 4-wheel drive capabilities or carry a set of snow chains in the trunk for those necessary moments.

Fortunately, this was not one of those times, but that doesn’t mean you are in the clear.  The slope grade can be significant, and the turns can be sharp hairpins that mandate control.

I saw a few vehicles pumping the brakes at every slight curve, and I just want to remind you that you can save your breaks by simply down shifting into 3rd or 2rd depending on your make and model.  This includes automatic transmissions too. 2ndwill have the most torque and speed control, as your RMPs will increase but the speedometer will remain the same unless you hit the gas or tap the brakes. The main goal is to make it safely home so that you can start planning your next time on the slopes.  Perhaps your next day trip will be under the lights and amongst the stars. 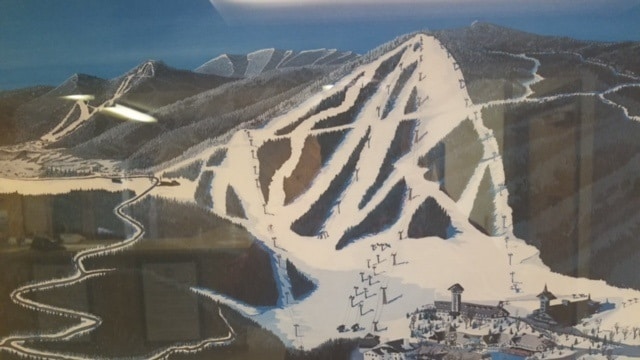 Previous Post
A Little Bump in the Road to Start the Week
Next Post
January Thunder on Monday, Snow on Wednesday?