Two Ski Resorts Are Open on December 3rd; Everyone Else Playing the Waiting Game 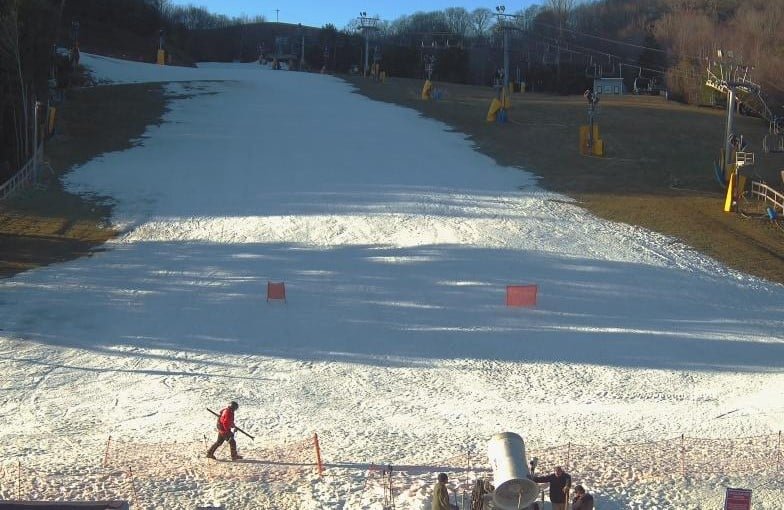 Cataloochee Ski Area looks amazingly well despite the fact that they have had to deal with the same lack of snowmaking temperatures as the rest of the ski areas in the state. Looks like their plan to focus on the 3 slopes that are open, paid off. Those same 3 slopes are open for day sessions today with a base of 6-10″.

Snowshoe Mountain Resort has groomed the 9 slopes that they are open with today to near perfection (a Snowshoe forte) and they are playing with a base of around 24″.

As the title of today’s post stated – all other ski areas in the region are playing the “waiting game”. I was visiting Chetola Resort in Blowing Rock on Friday evening and the question was posed, “I wonder why the ski resorts are not making snow yet?”

Of course I stepped up to defend Appalachian and the others in our area and shared the fact that it was currently 46° outside. Another person chimed in with, “Well we had cold temperatures the other night.”

I have received similar sentiments via email in the last few days. As the calendar flips over to December, people do begin thinking about winter and snow, but some still don’t connect that the snow that we get to play on at our ski resorts is “real snow” as one such reader questioned, “Is Massanutten going to open for skiing this year. We noticed that they have not made their snow this year. They usually start earlier than this. If they don’t open, can you suggest another place we should consider?”

The fact remains that Massanutten and all 16 of our ski areas in the Southeast and mid-Atlantic make real snow. It isn’t artificial and just like nature’s own version – it takes cold temperatures to make it. Those huge fan guns and even the old-school snowmakers simply fire ultra-fine droplets of water into the air and that air has to be cold enough to change it into snow before it hits the ground.

The ski areas that are not open have either not yet had the cold temperatures needed or they’ve had so few nights of snowmaking opportunities that they decided to wait until CONSISTENT cold temps hit.

Those Consistently Cold Temperatures Are On the Way!

The countdown is on and you can believe that every single mountain-ops staffer at every single ski area has their eyes on Wednesday evening as that is when the temperatures are meant to drop below freezing and allow them to crank up their snowmaking systems in earnest. For some resorts that will be the first time other than some “system tests”.

The greater news is that we’re seeing overnight lows in the low to mid 20s at nearly every mountaintop all the way through the long-range forecast period. At some resort communities there will be some around-the-clock snowmaking opportunities.

Additionally – SNOW – is in the forecast. Light snow could fall Tuesday night and Wednesday evening at some of the higher elevations and more snow is early-forecasted for Saturday. Cold temperatures look to be here to stay for a while and that is music to the ears of every bean-counter at every ski resort and tourism-related business in the region.

Did You Guys See The MOON Last Night?

If you missed it, you can see it again tonight! I know this sounds like a joke, right? After all it is hanging in the sky every night. However, last night I was driving up to Beech Mountain for dinner at the new Beech Mountain Grill, my mom exclaimed, “Would ya’ll look at that moon!”

It was HUGE and you could see much more of the detail on its surface than normal. That beautiful moon created great light and a gorgeous backdrop for the Banner Elk Christmas Parade which took place at around nightfall on Saturday.

I didn’t know it at the time but what we witnessed was the first and only Full Cold Moon or Supermoon of 2017. We’ll get another good look at it tonight, and there will be TWO in January. If you’re like me and have never heard of a Supermoon or Cold Full Moon…it is when a full moon coincides with the perigee of the moon’s orbital cycle. A perigee is the point at which the moon moves closest to Earth during orbit. Because the orbit is not a perfect circle, this means the moon typically sits anywhere between 252,000 and 226,000 miles from Earth. That is a difference of 26,000 miles—longer than the entire circumference of the Earth.

The shorter distance makes moon appear larger in the sky, allowing it to reflect more light and look brighter.

This year’s supermoon is also called the Full Cold Moon. This is because it is the first full moon of December, a sign that winter is here.

Temperature Differentials Across the Region

The coldest temperatures in the region this morning were are the West Virginia and Maryland resorts. The mildest were at Ober Gatlinburg and Sapphire Valley. That’s pretty typical as Sapphire is in the southwestern most corner of the state of North Carolina.

Here are all the morning lows…(BRING ON THOSE FRIGID TEMPS WEDNESDAY!)

Previous Post
So I’m Out of the Loop for a Few Days and This is What I Return to???
Next Post
THE P.U.D. FACTOR