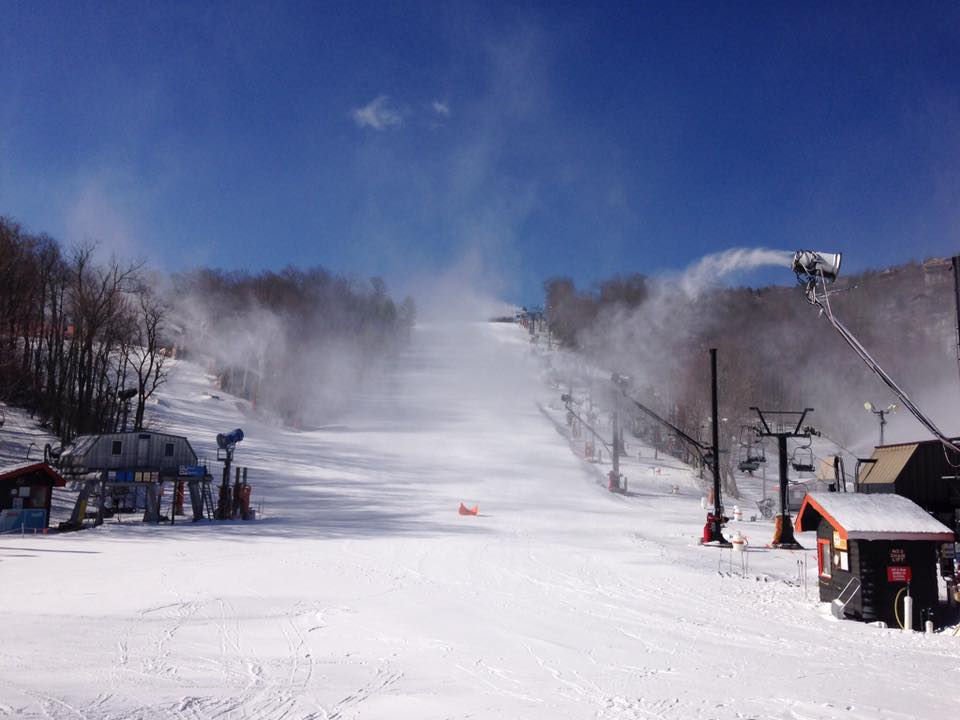 If Appalachian Ski Mountain can combat the crazy weather for that long – that IS the plan. They made snow two nights ago and were still at it early on Monday morning, just before opening the slopes to a handful of guests. Looking at things this morning, they certainly LOOK capable of playing for nearly a week longer than any other ski area in the region. The only ski areas open right NOW are Appalachian, Snowshoe, Cataloochee and Sugar. Sugar plans to close tomorrow (Wednesday); Cataloochee plans to make their last day – Saturday and Snowshoe will close for the season after Sunday’s sessions. 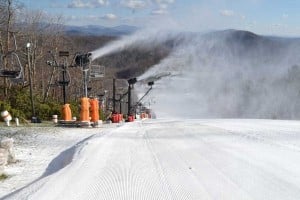 That will leave Appalachian as the ‘sole snow survivor’ to extend the season another six days. Their slopes certainly LOOK the best as some sweet grooming had the slopes looking firm on Monday. No thin coverage or bare spots there.

The only thing that we couldn’t help but notice was the fact that each time we looked at the LIVE cams yesterday – the slopes were nearly empty. Ditto that in a marketing photo that App took on Monday – showing off some awesome corduroy.

YOU ASK. WE ANSWER.

A few readers have asked where we’d recommend making last day turns for the rest of this season. What you guys don’t often tell us is – where you’re coming from. It’s quite a trek from Miami to Snowshoe unless you’re flying and even THAT is an ordeal that is deserving only if it’s epic conditions. Saying that, I’ve answered those questions without regard to the distances that you guys may be traveling.

Here’s our recommendations of THE BEST with a few notations:

1. Appalachian Ski Mountain – They are all but ONE slope from being 100% open. There are NO thin coverage areas on these slopes. You can have the mountain all to yourself and turn fast laps top to bottom on the best snow left in the region.

2. Snowshoe Mountain – It is hard not to give these guys the number one ranking for best snow as of March 22nd. After all they offer 174 acres of terrain and 40 slopes and trails – PLUS they are still open for night skiing. You can bet that a LOT of that terrain is covered in awesome corduroy early on in the day. No lift lines here either. Conditions today will be sweet. The only reason they aren’t number one right now would because App would get a SLIGHT NOD per conditions all around and because App is certainly more convenient for travel at this late date in the season.

3. Cataloochee Ski Area – These guys definitely are 3rd of the 4 left open. Cat is only open to their mid-station which is why they come in at 3rd. Three of their four open trails are greens with only Lower Omigosh (a blue) offering anything other than beginner terrain. Cat DOES have good side to side coverage…just not on par with the top two resorts on this March 22nd morning. The Maggie Valley resort is one of six ski resorts in North America vying for “Best Snowmaker of 2016” and they deserve the award as that area has not had CLOSE to the temperatures and snowfall that even Appalachian and Snowshoe has had this season.

4. Sugar Mountain Resort – They could have closed a week ago as there are only narrow strips of “connector paths” at some spots on Lower Flying Mile. Some readers have posted some not-so-flattering photos to us via email. I didn’t use them in fairness to Sugar because guests can make the decision to pay for a lift ticket or not. Sugar is fairly suggesting to people BEFORE they purchase a lift pass to check out the slopes. Truthfully they look pretty rough with only Lower Flying Mile and 3 other green/beginner slopes open. In much the same way that Wisp opens up whatever terrain they have left for those who just “have to play” – Sugar is offering a last chance to ride mentality on very limited terrain. That ends after day session on Wednesday.

It’s All About Your Perspective 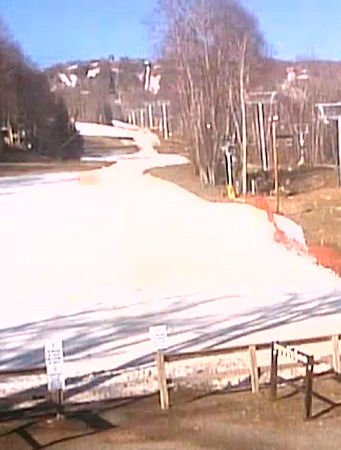 The narrow strip of snow left at the base is clearly visible at Sugar. Stop your complaining.

I’ve received more than a few emails from recent visitors complaining about how bad the conditions were at Sugar on Saturday and then more came in after Sunday sessions. I have to be honest. With all of the technologies available to us today, I don’t know how or why people complain. You can see what is out there on the slopes before you make the drive. Additionally, Sugar Mountain is being about as fair as they can be by advising anyone who shows their face at the ticket window to, “Check out the slopes before you buy a lift pass.” It’s pretty easy to look up at what awaits you, so if you buy a liftie, you kind of cancel out your chance to moan about it.

Also one reader (I have not confirmed this) wrote me that Sugar is even offering a refund AFTER you’ve made one trip down the hill. I know that they HAVE done that a time or two in the past, so maybe they are now. However don’t count on that as (like I said) I have not confirmed that. It is easy enough to check out the LIVE CAMS, walk out on the slopes and check them out…and stop your griping.

Also, I checked out Trip Advisor reviews of Sugar from the last 3-4 days and there are PLENTY of people who seemed to be VERY PLEASED with their trips to Sugar. Check them out the great reviews!

Here is the snow report details for this morning:

Sugar Mountain Resort – They will play on 4 slopes today. They ARE open for night skiing tonight as well. There was much speculation about Sugar closing yesterday, but they decided to play for another two days. Sugar Mountain Resort will close tomorrow at 4:30pm for the season. Although there’s no formal announcement of it – we’re guessing that Sugar WILL do their annual “burning of the snow” ceremony at that time.

Snowshoe Mountain – 27° These guys made snow again last night even though they are planning to close Sunday. They are showing off a bit this morning as for the second day in a row they have ADDED another open slope to their offering. Sunday they played on 38 slopes and trails. Today they are skiing and riding on 40. Shawn Cassell posted, “Alright come get your goggle tans! The season ends on Sunday the 27th, so make sure you’ve done an ample amount of shredding to hold you over until next season!”

Cataloochee Ski Area – 33° They will ride on 4 slopes and trails for day sessions only today.

Appalachian Ski Mtn – 33° – They did NOT make snow last night but they are playing on 11 of 12 slopes today and they look pretty awesome this morning. App has their meltdown games this weekend, but STILL says they will ride on until April 2nd. So there’s TWELVE more days of riding the snow if you want to head to App.

So if you’ve got the Joneses for some last day turns, you’ve got: