Mild temperatures really make a return today as it’s going to be in the 50’s and 60’s at the ski areas in the region.  If you are itchin’ to get some turns in, you better get out this morning as clouds increase today with underdeveloped snow moving in later this afternoon/evening.  Tomorrow just looks downright nasty.

It should come as no surprise but there is no snowmaking this morning as temps didn’t get below freezing last night.  There’s actually some crazy inversions going on this morning and both Sugar Mountain and Massanutten showed that on their snow report pages.  Both resorts had temperatures at the summit that were several degrees warmer than at the base.  The craziest inversion though is in the High Country of North Carolina this morning.  Beech Mountain is already pushing 50 degrees as I type this.  Meanwhile, a few minutes drive away but 1500 feet below, Banner Elk was at 33 degrees.  Wowza.

Looks like a nice morning at App Ski Mtn. They love them some corduroy shots.

Today is the final day of February, and it’s our second month in a row with extremely mild temperatures.  I was looking at the data for the month to get some context for how warm it’s been.  I’ll go over it some more in detail tomorrow once we hit March, but it’s pretty interesting to see that the average temperature thus far for Banner Elk, NC (home of Sugar and close to Beech) has been almost as warm as the average temp for March.  The same goes for Snowshoe.  March in February.  That sounds about right.  Meteorological winter ends today as well, so I’ll also take a look at the three month season as a whole tomorrow.  Hint: it stinks. 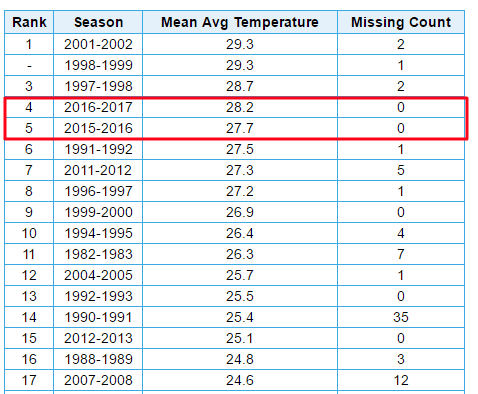 A preview of some of those stats.

As I already said, get out today while you can because tomorrow looks gross.  There’s thunderstorms in the forecast and it’s going to be a good day to stay inside.  I mentioned yesterday morning how we’d probably see some temporary closures tomorrow, and I seem to have been onto something as Massanutten mentioned that in their snow report this morning.

Snowmaking weather is forecast to return on Thur and Friday nights. Rain and warm temps tomorrow may cause a temporary closure for Wed and or Thursday.

That underdeveloped snow will undoubtedly put a hurtin’ on the bases at the resorts.  I’m seeing some decent rain amounts in the forecast right now, generally ranging from the quarter to three quarter inch range for tomorrow.  Thankfully, cold air moves in quickly behind those storms and we might even some snowmaking as early as tomorrow night for some lucky ski areas.  Thursday and Friday nights look even more promising for widespread snowmaking.  After the storms tomorrow, it will be needed for the weekend.

As for the weekend, it is still looking very promising.  Colder temps, well seasonable anyways, will firm up the snow and allow for snowmaking at night.  All of the open resorts should be able to offer some pretty good conditions all things considered.  I highly suggest getting some skiing and riding in because who knows what happens after this weekend.  The long term forecast doesn’t show anything particularly great, so this weekend could be the final hurrah for a few resorts.  I saw a video this morning from one ski area who said they hope to stay open to March 26th.  I don’t see that happening to be honest.  Hopefully I’m wrong through!  Get it while you can!

Short post this morning I know.  There’s just not much going on and the weather is a bummer!  Check back tomorrow though as I’ll have all of that weather data to go over.  Should make for an interesting read on what will be a nasty day.  Think cold and snow!