I’m a few days late with it but I wanted to share some pics and videos from my trip up to Beech Mountain Resort on Tuesday.  It was my first day of the season and I must say, I’ve had way worse in previous years.  There was no white ribbon of death as 4″ of snow had fallen in the previous 24-36 hours.  A snowy landscape, even if only a few inches deep, really enhances the vibe when going skiing or snowboarding.  It’s just so much better than those times when you look around and see only green/brown.  To have it on opening day was a nice little treat.

The fact that there was really only one line down the mountain didn’t bother me either.  It’s always funny how at the end of the season I would have scoffed at riding only Upper and Lower Shawneehaw.  Yet I couldn’t get enough of that single line down the 7 or 800 vertical feet that Beech offers.  It’s been a long 9 months of waiting to snowboard!  Wakesurfing is amazingly fun, but it’s not snowboarding.  It felt GOOD to get back out there on the slopes.

The weather ended up being rather interesting.  The top half of the mountain was sublime.  Clear skies and no real wind (or snow guns) to speak of.  Once you got down to Lower Shawneehaw though you were enveloped in fog/clouds which were mixed in with some snowmaking.  Not ideal, but it’s early season and I’ve been riding in the Southeast for long enough that I’m used to it.

The contrast in conditions between the top and bottom half of the mountain made for some SPECTACULAR sights at times.  It’s been a few years since I was “above the clouds” at Beech, and I forgot how beautiful the views can be when it happens.  I walked up to the deck of the Skybar at the top of the mountain so I could just gaze out and take it all in for a few minutes.  Click each of the images below to get an idea of what I’m talking about. 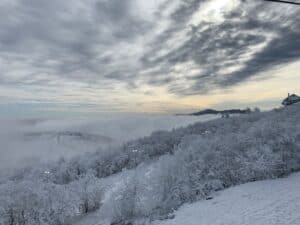 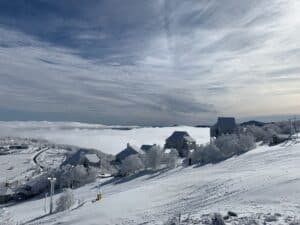 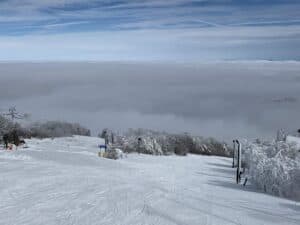 I posted an edited video using my new GoPro Max, which is FREAKING SWEET by the way.  You can CLICK HERE to view it.  Below is another version of it, albeit in a complete 360 degree view.  You can click and drag/pan around on the video to see everything.  It’s pretty cool!

All in all it was a very stellar first day of my 2019/2020 snowboard season.  It’s not the best first day ever for me, that would go to either 2012 (Superstorm Sandy) or last year (18″ dump in 12 hours at Sugar).  It’s definitely up there though and I’m already itching to get back out on the slopes.