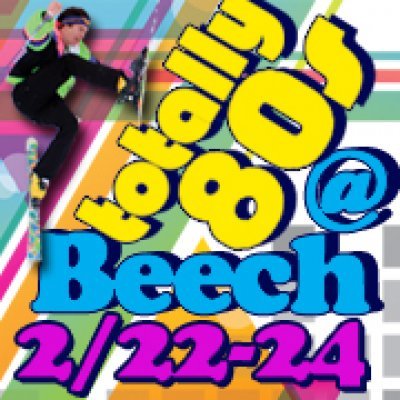 Dig out those parachute pants or leg warmers, and don't forget that favorite bandana. Beech is going back in time again this February. The second annual Totally 80's Retro Ski Weekend takes place Feb. 22-24 in the Town of Beech Mountain. Relive the "new wave" era while enjoying 80's bands, old school DJs, a retro apparel contest and 80's-themed promotions. Live music begins Friday evening with an all-80's show from rockers Buick MacKane of Morganton at 9 p.m. at Jackalope's View restaurant. On Saturday evening, retro band 80'z Enuff of Greensboro rocks Beech Mountain Resort with a 7 p.m. show at the Beech Tree Lodge. The ski resort also hosts a "big hair and big air" freestyle jump competition – complete with 80s DJ – at 4:30 p.m. Saturday. Meanwhile, there will be mechanical bull rides and the SKINC 80's apparel contest later that evening in the Beech Tree.  The best 80s apparel gets 500 CASH courtesy of SKINC!! All weekend long, skiers and snowboarders are encouraged to wear their most awesome 80's ski gear on the slopes.

"Last year 80's weekend was really successful – definitely one of the most fun weekends we've had at the resort," said marketing director Talia Freeman. "A lot of customers dressed in their 80's ski clothes, as did a majority of our employees, so it literally felt like you were in the 80's. The turnout was great and I anticipate it being bigger this year." Reaganomics will be in effect as town businesses offer retro deals. For example, lodging is available at $80.80 per night, with restaurants providing $19.80 dinner specials. There will also be ski rental specials in town, and one store even has three bandanas for $8.80. "Flip up your collar and head to Beech Mountain the last weekend in February," said Amy Morrison, coordinator of the Beech Tourism Development Authority. "It's one totally tubular experience."

The Charlotte-based Ghostbusters will be in Beech Mountain all weekend with Ecto-1, an authentic replica of the famed Ectomobile from the Ghostbusters movie.

They will make a Friday evening appearance at Famous Fast Eddies deli and bar, before moving to the ski village at Beech Mountain Resort for Saturday and Sunday.

"We're always excited at the ways the decade of the 1980's comes back, and the different places we get to go to," says Doc Geressy, captain of Carolina Ghostbusters. "Beech Mountain's retro 80's weekend is one more cool thing on our list."

People who attend the Ghostbusters appearances are encouraged to bring cameras so they can pose for photos with the crew and Ecto-1.

"There are a lot of Ectomobiles across the country, but probably only six or seven of the older style Ectos like ours. We're very lucky to have one," Geressy says. "People will be able to get their picture made with one of the most iconic movie cars in all of cinema."

In addition to making promotional appearances, the Carolina Ghostbusters are actually paranormal investigators. Joining Geressy at Beech will be team member Cheralyn Lambeth, a long-time investigator of the paranormal and author of "Ghosts of Greater Charlotte."

"We'll be posing for pictures and have all kinds of different equipment from the movie," says Geressy. "Folks will be able to see the proton packs, the ghost trap, and we'll be in our official jumpsuits."

For info on the Ghostbusters appearances at Beech's retro weekend, who you gonna call?

Try (800) 468-5506, or go to: www.BeechMtn.com
Previous Post
Weekend Outlook Fantastic for Riding, ASM WILL NOT be Making Snow from 10am-10pm Saturday & Sunday
Next Post
President’s Weekend Will be Awesome! Hit the slopes!