Too Much of a Good Thing

Is there really such a thing as too much snow, especially in the ski world? The easiest way to answer is to take a look at the resorts who have gotten a pounding from Sandy. It’s no surprise Snowshoe is at the forefront.

In case you aren’t sure why that is, take a glimpse at this photo featured in Snowshoe’s storm update below > 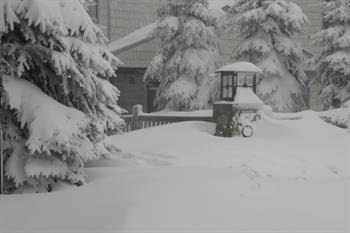 According to the National Weather Service, "the last of Sandy’s effects are winding down along the Appalachian Mountains. The early-season snowstorm has brought 2 to 3 feet of snow to some areas in West Virginia and Maryland and left thousands without power. Several more inches are possible in some areas before ending later this week and the cleanup can begin." This statement sheds light on the other side of the coin.

For some resorts, Sandy’s snow has given them the boost to already kick off their 2012-2013 season, others to prepare for an early opening, and yet there are a few who have actually lost ground because of it. Snowshoe’s President and CEO, Frank DeBerry, reported that throughout the past few days "normal operations at the resort were scaled back" in an attempt to keep all employees and guests safe. To see more of the report, check out Snowshoe’s storm update. 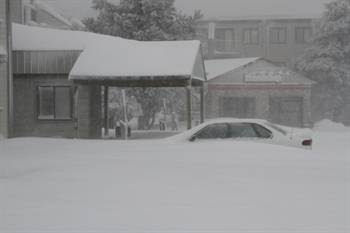 < Here’s the 2nd image included in that update!

If you take a look at Snowshoe’s Facebook page, you’ll see dozens of fans asking when they’ll open – Snowshoe promises to make an announcement as soon as the date is determined.

While we all anxiously await that information, we need to remember that the state of West Virginia and even parts of Maryland were gravely impacted by Sandy, and they have more important things to deal with first and foremost. Earl Ray Tomblin, the Governor of WV, was interviewed yesterday morning on KUNC 91.5 and offered the following insight: Right now, we have nearly a quarter of a million customers out of power. And because of the heavy snow, we’ve got – a lot of the leaves are still on the trees, so a lot of trees have come down, bringing down the power lines. The high winds are also causing problems with the power lines. But at this time, we’ve had at least three days notice and were able to prepare for this event much more than we were in previous events (Tomblin). Tomblin’s looking on the bright side and expressing that it could have been much worse, and, in fact, it has. The National Weather Service documented the most recorded snowfall West Virginia has ever received from a single storm – it was 57" in Pickens just after Thanksgiving in 1950. Fifty-seven inches, folks! We’re talking just under five feet! Talk about skiing deep powder.

As you can imagine, Snowshoe WV is under a winter weather advisory until 11 am today. The same goes for Timberline and Winterplace. Wintergreen actually has a freeze watch in effect until 9am tomorrow. In terms of new snowfall, however, there isn’t much to recount. Not much has changed in the past 24 hours, but here’s a look at how much snow the Southeast and Mid Atlantic ski areas have received from Hurricane Sandy overall:

There’s no denying that storms like this can be good for the ski industry, but the results don’t end there, as this October 2012 superstorm so plainly demonstrated. As you eagerly look forward to the rest of the region’s resorts opening, keep in mind all of the hard work that goes into not only preparing for opening day but the entire season, particularly given their current circumstances.

<Click here to Follow Us on Twiiter. You’ll get immediate updates on snow conditions, snowfall, photos posted, CONTESTS and more!