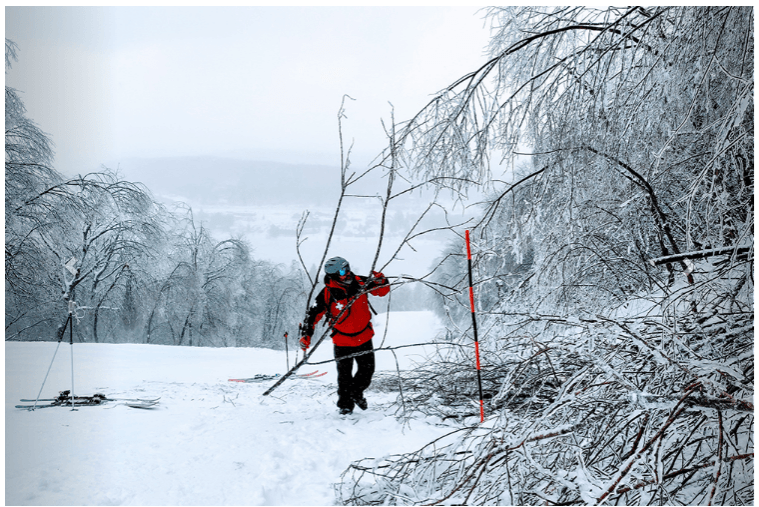 I have been competing in local and regional running races for as long as I can remember. Distances ranging from a 5k (3.1 miles) to a full marathon (26.2 miles). I can honestly say that in everyone one of those races, I made sure to thank every police officer that was helping to stop vehicles so that the runners could run the course safely.

Just a simple, “Thanks for being out here and helping today.” Nothing special, other than I really meant it, because even though they were being paid, they were making certain nothing crazy happened. I for one appreciate those efforts.

Now jumping ahead to these days and comparing that experience to visiting a ski resort to have some fun on any day that ends with a “Y.”

My son and I decided a few days ago to get rid of some pent-up demand, better known in these parts as the P.U.D. factor and head to Winterplace Ski Resort for a day on the slopes. I am convinced that Mother Nature is providing the best way to social distance and still have some fun.

I was alerted by my Winterplace bud, Tom Wagner that today (Sunday) was going to be on the busy side. No worries there as we figured others were trying to get outside also. Well, when we pulled into the resort, we were immediately flagged down by a parking attendant, making it very clear where he wanted us to park. Mind you, even though he was wearing his face covering, I could tell he was doing his job with a smile. I mean you could just tell. I thanked him for taking care of everyone and then the “thank yous” began.

One of the thankless jobs at any ski resort is the job of a ski lift attendant. Both at the loading and unloading ramps. I truly believe that most skiers and snowboarders just take a lift attendant for granted. But who do you rely on when something unexpected happens when getting onto a lift chair or when you do a face plant getting off the lift chair. By the way, been there, done that. They are there to stop the lift or pick you up and get you on the way down the slope. Each and every one of them received a hardy “thank you” from yours truly today for their effort.

Earlier today as I was riding a lift – what do I see below me, moving a safety barrel that protects skiers and snowboarders from hitting a snowmaking water hydrant was a Winterplace Ski Patroller. Another one of those folks that many of us who are having fun on the slopes take for granted. Many a skier or snowboarder consider a ski patroller, the “slope police.” At the end of the day, they are just there to keep things safe for everyone and, in the unfortunate case of an accident, provide first aid if needed. Another one of those situations that, yes, they are getting paid, but deserve a thank you. The patroller below me received just that from me from about 40 feet above him.

Another group of resort workers that deserve a thank you from each and every one of us are the resort’s snowmakers and grooming crews. Thanks to this year’s weather, most of those operations have gone unseen, other than for the billions (that’s with a “B” folks) of tons of manmade snow that currently covers the open terrain in the southeast. They have been so successful with making snow at night, that very seldom have snowguns been operating on open terrain this season. I know how much all of you enjoy skiing and riding through snow guns that are operating. (Insert sarcasm.) Well, an operations guy popped out of the ops building below me on one of my lift rides and, yes, I got to thank him also. 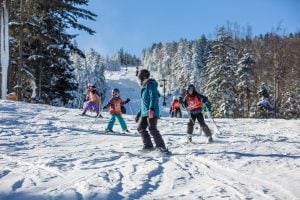 A couple weeks back here in this space, I informed everyone about the young ski instructors at Winterplace that are used to make sure everyone has their face coverings on while in the cafeteria area. I saw them get hammered by some folks that just don’t want to follow the rules of face coverings mandated by West Virginia’s Governor Jim Justice. Today I got to thank them personally for trying to keep everyone compliant with the directive. They are just doing what they are being told to do to keep everyone safe during these crazy times.

As I stood back and thought about who I got to thank today during my visit to Winterplace, I realized there was another group that a big thank you needed to go out to and that’s all of you who are trying to make this season possible. That’s because if it wasn’t for you loyal skiers and snowboarders having faith in your ski resort in the southeast, there wouldn’t be a season for old snowboarders like yours truly to blow off some P.U.D. steam. For that, here is a hardy thank you for understanding that it might be a little different right now, but the snow is still white and fun to play on, on any day that ends with a “Y.”

A quick final thought for this week’s chat. As I was waiting to take my final lift ride of the day, I caught up with a friend of mine who was taking his son and daughter skiing for the first time. It was hard to tell if they were having fun with dad as their smiles stretched from ear to ear. When I asked Bree how it was going, without hesitation she told this old snowboarder, “It’s easy, I’m doing great.” God bless the youth of this industry. There is hope.