Timberline Resort is making Snow! Several others are as well! 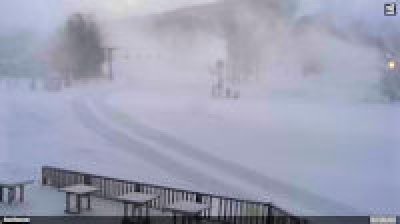 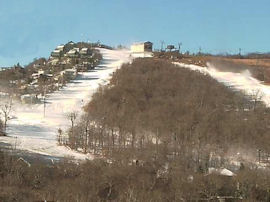 As expected, several ski areas were able to make snow around the clock once they got started Friday evening.  As mentioned in the title of this morning's BLOG, Timberline Resort started making snow as well. We were able to get into their webcam and pitch it up a little to show the snowmaking system kicking it!  Winterplace Resort is blasting their mountain as well.

<Beech Mountain looks great this morning with snow covering their trails. They LOOK to be making snow not only on Shawneehaw but several other trails of importance to their guests!

Cataloochee added another open trail and now has 4 open, as does Sugar Mountain. Both resorts also added a good bit of base as both resorts are calling it 12-36/38" base depths.
Sugar is offering ice skating and night skiing tonight. Cataloochee is day skiing and riding only for Sunday.
On the surface, Snowshoe Mountain LOOKS like conditions might have dictated less terrain open for today as they dropped from 11 open trails on Saturday down to 7 for Sunday. However that is simply because they are operating the Silver Creek trails this early in the season on Fridays and Saturdays. Snowshoe picked up 1" of snow in the last 24 hours to take them to 31" on the season.
By the way, the Snowshoe Basin trails will be open from 9am-4:30pm, and the Silver Creek area will be closed. Silver Creek will reopen Fridays and Saturdays from 2pm-9pm.
The coldest temps happened overnight last night as it was 15.8° at Sugar last night and now 26.3° at 9am.
Speaking of Sugar, we get a lot of emails asking us "Why Sugar is charging so much" this early in the season for a lift pass. We're not sure why Sugar gets the heat about their lifties when right now they are offering the LOWEST price ticket at the window, (Snowshoe has several deals and packages that even make lift passes FREE at times, however here is a breakdown of prices this morning.)
$41 Full Adult Day or Twilight ticket at Sugar
$50 Full Adult Day at Cataloochee
$59 Full Adult Day at Snowshoe
IN OTHER NEWS…
Appalachian Ski Mountain is blasting a crazy BLIZZARD of snow on their entire mountain! Check it out at http://www.resortcams.com/webcameras-app-ski-mtn-live.php
I'd love to know their base depth since they just began making snow Friday night.
Beech Mountain has made a ton of snow since Friday night. They LOOK LIKE they could open within the next day or two.
Sapphire Valley is now making snow and that can be seen via their new Streaming WebCam implemented and hosted by ResortCams.com! Check it out at http://www.resortcams.com/webcameras-sapphire-valley-ski.php
By the way it is 22.3° at the southernmost ski area in our coverage area. That's 3.7° colder than atop Beech's 5506' elevation. Weird but true! Good to see Sapphire making snow! Actually it's GREAT just hearing from Sapphire. They are really ramping up their winter marketing campaign this year and have already pledged to be active with us this season!
Bryce Resort made snow. They are still looking at Mid December for an opening.
http://www.resortcams.com/webcameras-bryce-resort.php
Looks like the guns at Massanutten Resort are making for a nice blizzard as of this post. See http://www.resortcams.com/webcameras-massanutten.php
I have to tell you that I think my new favorite ski cam is this one:
http://www.resortcams.com/webcameras-massanutten-base.php
About opening up at Massanutten, Kenny Hess wrote, "Keep thinking COLD! If weather allows, we plan to open the Ski Area on December 8th!"
Getting a little concerned at Wintergreen Resort. It's been in the low 20s the last two mornings and either their webcam is dead or they haven't made snow. We'll try to get Kenny or Tonette in touch with them Monday AM.
Canaan Valley got about an inch of new snow, but the guns are not running this AM. We don't think we've seen them run yet. Bear in mind that Canaan Valley Resort has a planned opening on December 21st, so it's still early for these guys.
Ditto Timberline Resort. The LIVE CAM LOOKS PRETTY SWEET with snow on the deck, and they ARE making snow!
http://www.resortcams.com/webcameras-timberline.php
Winterplace isn't reporting it, but they are making snow! Check it at http://www.resortcams.com/webcameras-winterplace.php
Wisp Resort is making snow at 22° this AM. They also are reporting 1.5" of new snow and 39.5" on the new season.
One quick note: We've gotten a lot of emails about Wisp's webcams. We are not in charge of those. We ARE expecting to speak with them this week about trying to get a new STREAMING cam up there. At one point Wisp had the most and BEST cams. Not so anymore but we'll try to do something about that!
Ober Gatlinburg made snow overnight and are now making snow on the base of the ski mountain! Their tubing hill looks VERY NICE! http://www.resortcams.com/webcameras-ober-gatlinburg.php
WHAT IN THE WORLD IS HAPPENING AT WOLF RIDGE?
They are reporting 46° this morning. It's 30.7° at the resort. They haven't updated their snow report since March 2nd to let anyone know what's going on. Their cams aren't working and they aren't answering their phones so we have NO CLUE whether or not they are making snow. We have to believe they are, but…if a tree falls in the forest and nobody is around the hear it…does it make a sound?
Anyone out there who knows what's going on at Wolf? Todd?
That's it for us today! Check back Monday AM for some new updates. We think we might see another ski resort opening!
Email me at [email protected]
Previous Post
SNOWMAKING IS THE TOP STORY OF TODAY!
Next Post
Appalachian Ski Mtn. Opening Day Information