Where else will you see such laid-back island style at a ski resort than #TimberlineWV at Snowy Luau? 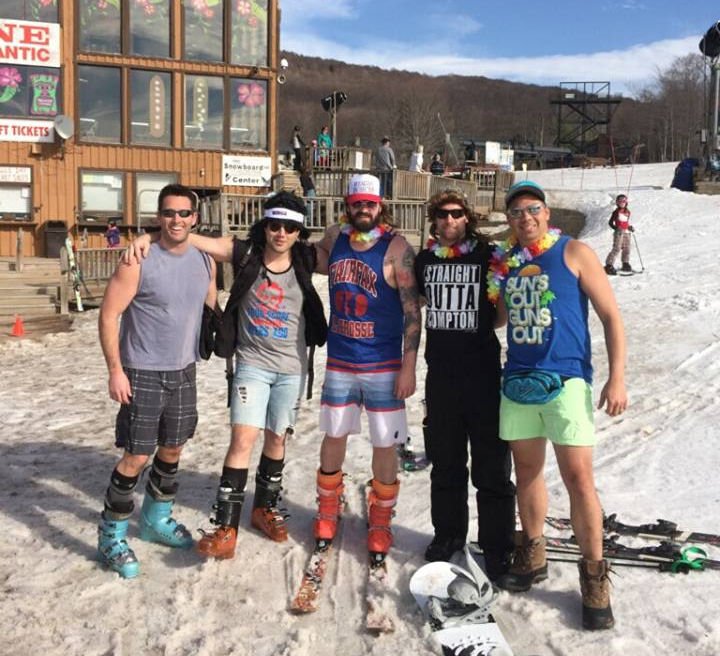 Today’s random thoughts begin with the coolest weekend of activities which on this particular weekend happen to be at Timberline Resort in Beautiful (by God) West Virginia. 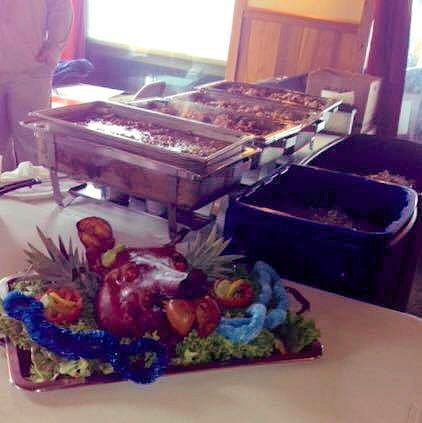 Timberline hosts their annual “SNOWY LUAU FESTIVAL” today and tomorrow. They have carriage rides, carving demonstrations, a Lahaina Triathlon,  and a Pig Roast on the Deck at Noon.

They are also hosting an Après Ski Bonfire & Drumming Party at 8:30pm. It all sounds like we should have been there. We will have to make that a MUST VISIT for next season’s SkiSoutheasTV – if we can get an internet connection up there! Later in the evening there will be a Lava Light Parade & Fireworks, Hoku Hula Dancers Live Show with Hula and Fire Dancers.

Boy Howdy…things are Winding Down Quickly.

Check the SNOW REPORT for all of the deets. I’m just rambling today. Nothing in today’s post has any real order to it. Random thoughts create random writing. It’s probably a symptom of Spring Fever as I’m headed over to work on my boat and the temp is meant to be in the mid-70s with lots of sun. 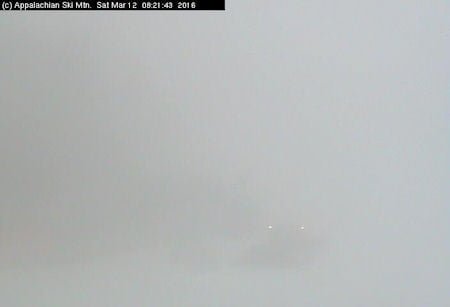 Appalachian Ski Mountain at 8:30am.

Someone told me that FOG kills snow on the slopes even more so than the warm sun. I researched that and don’t see any real proof of it from anyone smarter than me. It seems logical though…or does it?

Regardless the photo to the right is of Appalachian this morning as of 8:30am.

They are NOT the only ski area with dense fog this morning. Actually this is the 3rd day in a row that I’ve seen heavy fog across much of the region. Perhaps it is the temperature inversions. 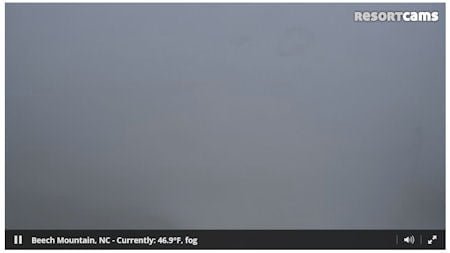 A “GREAT” shot at the Summit of Beech Mountain this morning!

Does the snow create the fog? I read somewhere that the fog around ski areas is actually created by the snow on the slopes interacting with the atmospheric influences around it. If that is the case AND if it is true that FOG eats away at snow, then it’s kind of a meteorological version of “snow suicide”, isn’t it?

Okay it ISN’T FOGGY everywhere. As I was touring the many ski cams at www.ResortCams.com, I was able to see some nice, snowy imagery. 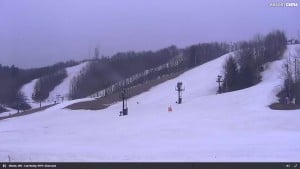 A good shot at Winterplace this morning! Click the image to ENLARGE it.

THERE REALLY IS a lot of good quality snow to ride at various ski areas of the region. If you are reading this post, you should know that this IS ALSO an awesome time to ski or even visit a ski area for the first time as the snow is soft and easy to carve. It also is awesome because you’ll kind of have the slopes to yourself.

That said, as I was checking the resorts this morning, I came across the following news:

Omni Homestead will close for skiing tomorrow. Ditto that for Canaan Valley Resort. They posted, “Join us for some great skiing Just two days left of a great ski season. Shine up those Golf Clubs because we are now Open for Golf! See you on the slopes and the golf course.”

Wisp will be open this weekend and the CLOSED next week and they will TENTATIVELY REOPEN for one more weekend. 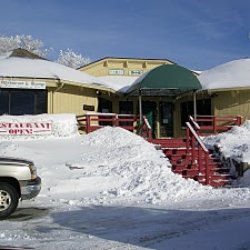 There are SEVERAL ski areas that are spreading the word that they WILL be open until March 26th or 27th, and there is even a “rumor” going around that Beech will remain open until April 1st. I used the “” around the word “rumor” because I’ve now heard it three times this week – the latest being UP ON BEECH MOUNTAIN last night at Vasarely’s. Cindy and Jay McCartney own the best restaurant on the mountain and we frequent there about once a month to enjoy great eats – but also to catch up with the latest news on Beech. According to Cindy, the word on the mountain is that Beech will stay open until April 1st.

Now I don’t know first hand because I try not to put any pressure on mountain ops people, especially when those kind of things are so weather-dependent AND since when resorts share news like that with ME, it kind of gets broadcasted to a ton of people and then they’ll look bad if it doesn’t happen. If Beech emails me with that kind of news, then I will share it. We’ll see.

Snowshoe Mountain is planning to ride until March 27th and of course that is weather dependent. They look like they have plenty of snow to make it. Ditto the “plenty of snow” scenario for Cataloochee which has a planned closing date of Saturday, March 26. Easter is the 27th and Cat wants to celebrate it. I respect that.

There ARE less slopes open across the region this morning. A few resorts dropped a few trails. (I told you this post would be an assortment of random thoughts.) Sugar is one of those. They dropped 8″ off their base depth in the last 24 hours and they also dropped one slope down to 18 of 21. They are also reporting, “Some Thin Areas on Oma’s Meadow.”

We think Sugar will try to remain open through the 27th, but to be honest they are already showing a lot of wear from the road.

Ober is down to 4 trails open and they reported a 5″ drop in base so we think that their last day of skiing will be tomorrow. (Possible the 20th.) However, they have so much to do their other than skiing that you can still have an awesome, full day of fun. They posted, “There are several other activities happening on the mountain, including our new Ski Mountain Coaster, scenic chairlift and indoor ice skating, just to name a few. Add in some great shopping and dining, and you’ve got a full day of fun at Ober Gatlinburg.”

Bryce Resort is hosting their WINTERFEST today. Kind of odd timing, but I like the effort. They posted:

It’s WinterFest! The fun begins with a Pancake Breakfast from 8-11am in the Fireside Grill. The Polar Plunge is at 9am, followed by a fabulous Costume Parade at 11; the Carter Lewis Memorial NASTAR Race at 11:30 and Pond-Skimming at 2pm. Fun, food, and music all day!

Massanutten will close for the season tomorrow. They posted, “Sunday, March 13 will be the last day of the season for skiing and riding. Snow tubing will be open on Monday from 10 am – 5:00 pm and will be closed Tue – Thu and reopen Fri – Sun next week.”

Wintergreen is looking at March 20th.

Timberline Resort will close March 20th. They could/should have a really nice week of traffic with Canaan being closed. That will take everyone interested to their slopes.

Winterplace will ride PAST Sunday…but they seem to be saying that they will be open for day skiing past that…but they are not committing to a closing. We’re thinking it may be March 20th.

Wolf Ridge Resort is playing for ONE MORE DAY. Today. They posted, “It is the final day of the 2015 / 2016 ski season at The Wolf and we are offering end of season discounts of $10 per ticket. We will be open for Day and Half Day sessions only today. We hope you will join us as we close out another season of fun on the snow. At this time, we know we will be open to mid-station on the quad and are working to see if we can reopen the top of the mountain.”

That’s it for yours truly.