They Say the Heart of Ski & Snow is Still Beating

And from what I’ve seen I believe ‘em…

Wow! What a difference the first week and a half of January has been when compared to that dismal December. It is easy to say that these recent snowstorms and accompanying cold that has parked itself for an extended stay have resurrected the life of this ski season.

The heartbeat of the industry is thumping again, which is quite remarkable given how close it all came to flatlining.

Without a doubt, every location has benefitted from the recent flip of the script, but some of them received a larger portion of the gifts that mother nature has provided.

Our northern locations are those big winners, and West Virginia is once again taking in the lion’s share. The great news is that they are not finished yet, so prepare yourselves for more of it.

As scheduling would have it, I made a three hour trip up from Charlotte to Winterplace one day after our own Joe Stevens got his first turns in. He highlighted that they, much like all of our member resorts, were pumping the snow out as much as possible when feasible.

The weekend visitors were thankful of that too, because on that day they had additional runs open that were not one day before, and this included a top bottom trek on the upper half of the resort.

Talk about extra trial circulation to get the adventures flowing. 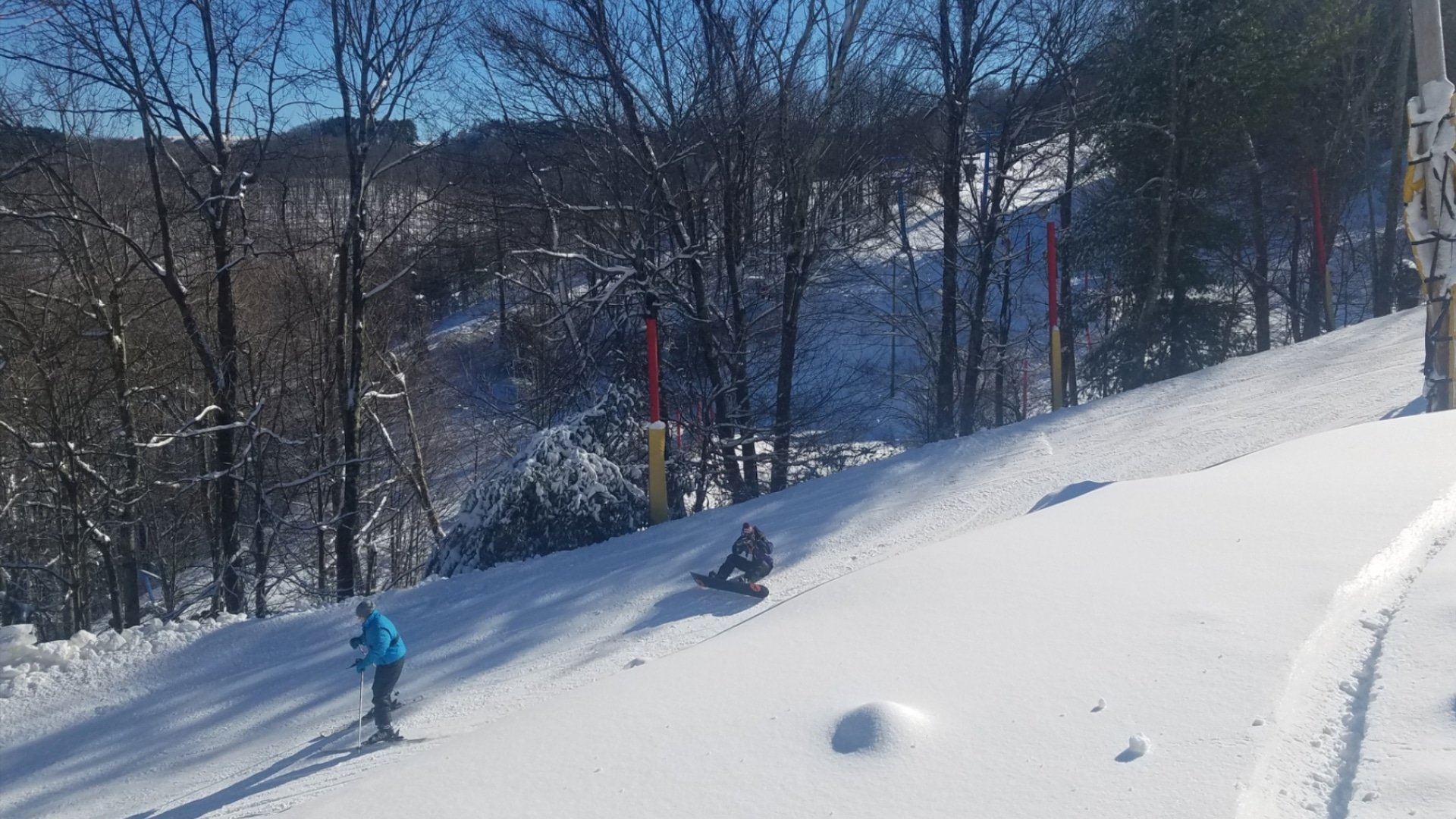 If you are not familiar with Winterplace, they are uniquely set up with two main sections that are serviced by multiple lifts.  Accessing these two parts is fairly simple, and the views along the way are excellent, especially on crisp and cold bluebird days.

On the bottom part of Winterplace you will find the bulk of easier (beginner) green runs, plus a few more difficult blues, with multiple rides to whisk you back up for another go at it.  I saw the #2, #4, and #5 lifts spinning and overheard that the Almost Heaven section with either #6 or #7 was available too.  There was a crowd, but none of the wait times in line were more than a few minutes.

If you are new to this sport, or know someone wanting to try it, this section of Winterplace is ready to teach you. 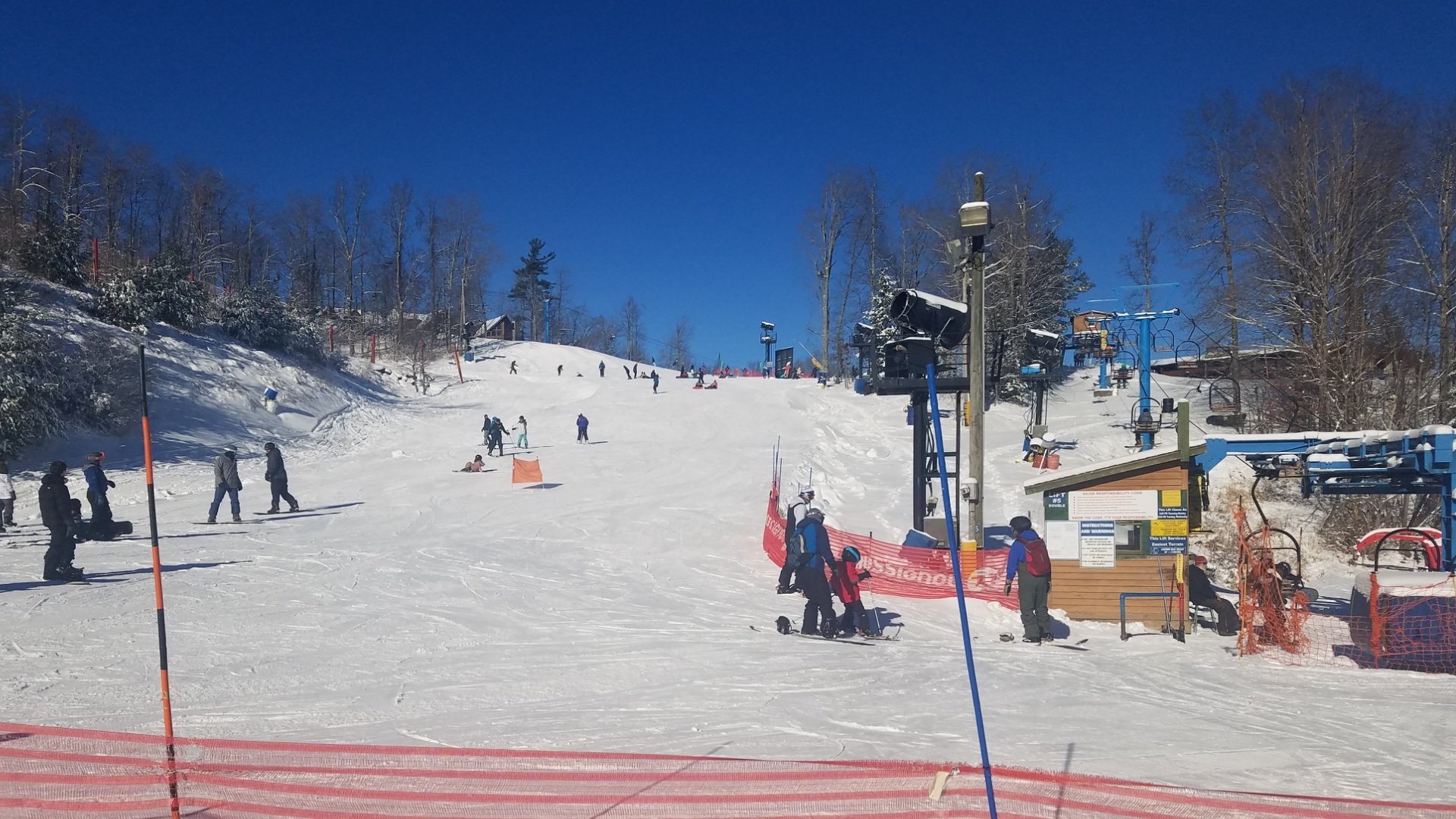 On the upper part you will find the more difficult blues plus four most difficult black diamond trails to showcase your skills for the crowds riding the #3 and #9 lifts.  They had the three-seater #3 going last weekend, but either lift will give you the most panoramic views as you can look north-to-northwest towards Charleston and see some of the nearby rises in altitude that are treeless up top.

Those peaks give the impression of above timberline terrain when they are blanketed in snow too.

While looking in the south-to-southeast direction Winterplace offers a stunning sight of Blue Ridge wrinkles along the West Virginia and Virginia border.

On top of that, Winterplace is conveniently located alongside Interstate-77 on Exit 28 near Ghent, WV.  It is a travel to resort in which you will find vehicles from a variety of states such as South Carolina, Tennessee, Virginia, Maryland, Ohio, Pennsylvania, and even one truck from Iowa.

If your route to get there is similar to mine in which you come up from further south, you will go through a gorgeous stretch of mountainous scenery in both Virginia and West Virginia, especially once you get past Wytheville on I-77 and I-81.  The views near the two tunnel entrances certainly will get your inner ski beast’s blood pulsing with wonderment.

This time around there was no snow in North Carolina, but as soon as I started ascending elevation in Virginia the white stuff showed up, and it got deeper as I traveled closer. 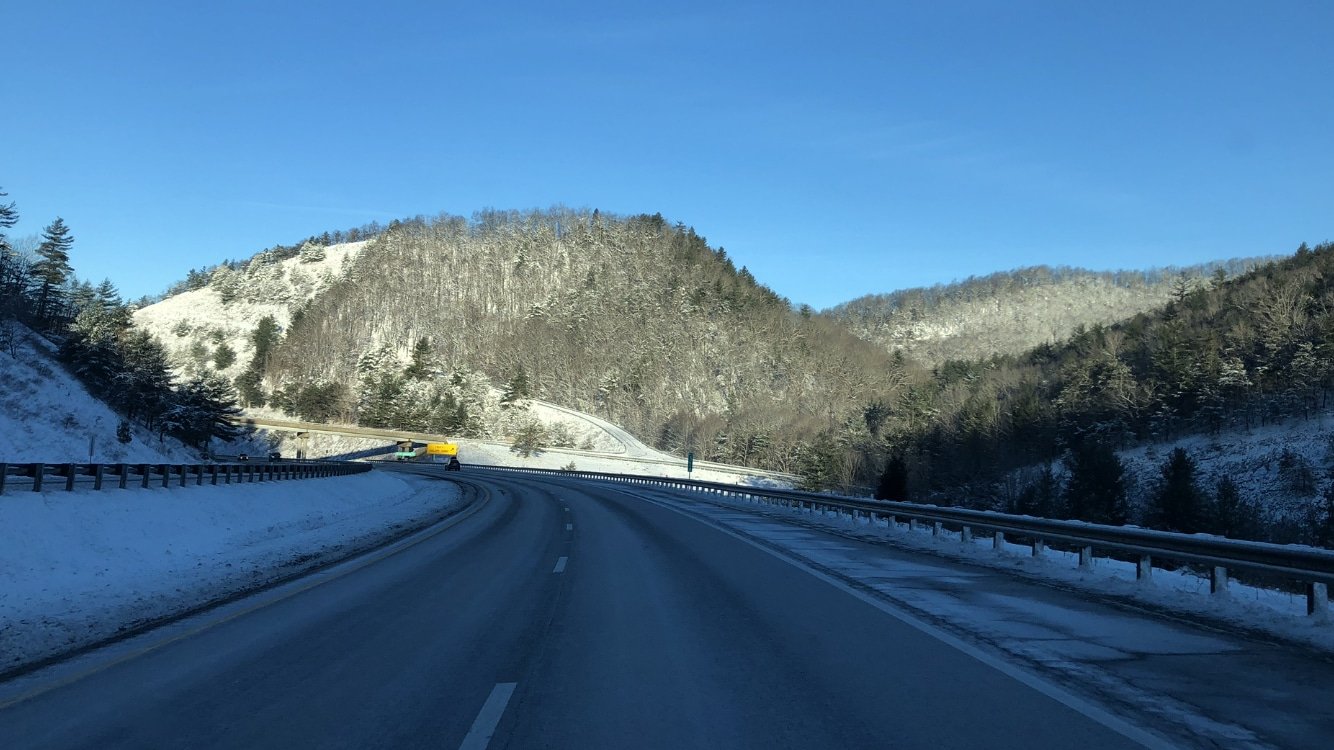 On this day they had enough runs available to explore around, but with several more needing a little extra attention before being good to go.  The trees did not have enough coverage to navigate safely though, so hopefully more of the white-gold will fall from above soon.

At the summit they did have the Compromise run open which spilled over to a black or blue trial combo of choice, which were Drop Off and Look at Me! Making laps on this section was great, and they even had a small part on the skier’s right side of Drop Off ungroomed as a mini powder section for that extra leg burn if desired.

Fair warning though, it seems that the pow spot was not packed down prior as it was bare grass a few days ago.  This meant that the top inch or so of snow was probably the wetter and denser manmade kind that basically firmed up into a thin sheet.

I may or may not have been come in a little hot on the first run, broke through that layer in a manner where my skis were like parallel Titanics going against one massive iceberg, but somehow got one ski tip stuck between the icy pieces and ultimately flipped over the handlebars for what the chairlift judges determined to be a spectacular crash. 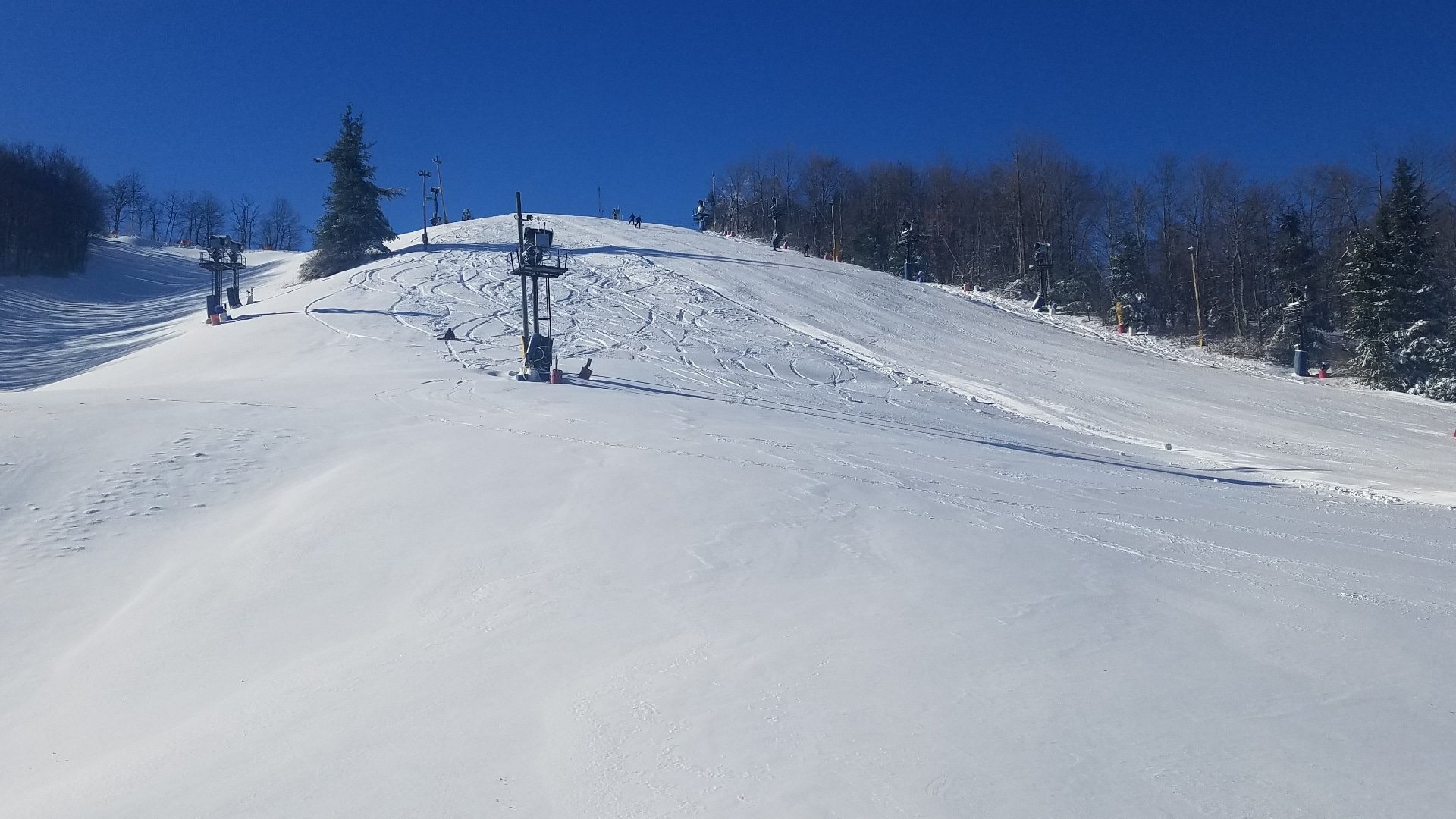 Regardless, the slopes had plenty of base coverage with no bare spots to report of.  Same holds true for any icy patches that cause chatter underfoot, especially as the daylight carried on.

Also, the resort was not blowing snow during the daytime hours, which was a welcomed bonus to many people I shared a lift ride with.  Not sure why that was the case though, because the temperatures early on were suitable for it, plus they had plenty of unopened areas waiting for extra base buildup.

Perhaps they wanted to treat everyone and give their heroes, I mean snow making crews, a break before getting back at it?

Overall, Winterplace has done an excellent job getting things up and running again, and it was very apparent that their procedures were going smoothly like a well-oiled machine.  I observed the rental shop taking care of walk-up customers efficiently, the dining area had patrons safely spaced out, and the Snowdrift Lounge had a decent guitarist providing live music during the lunchtime hours.  They serve amazing smelling items such as crock pot chili, and for the adult beverage drinkers, they offer a wide variety of appealing concoctions.

I recommend the hot chocolate with peppermint schnapps, especially if you need to warm up the vessels within. 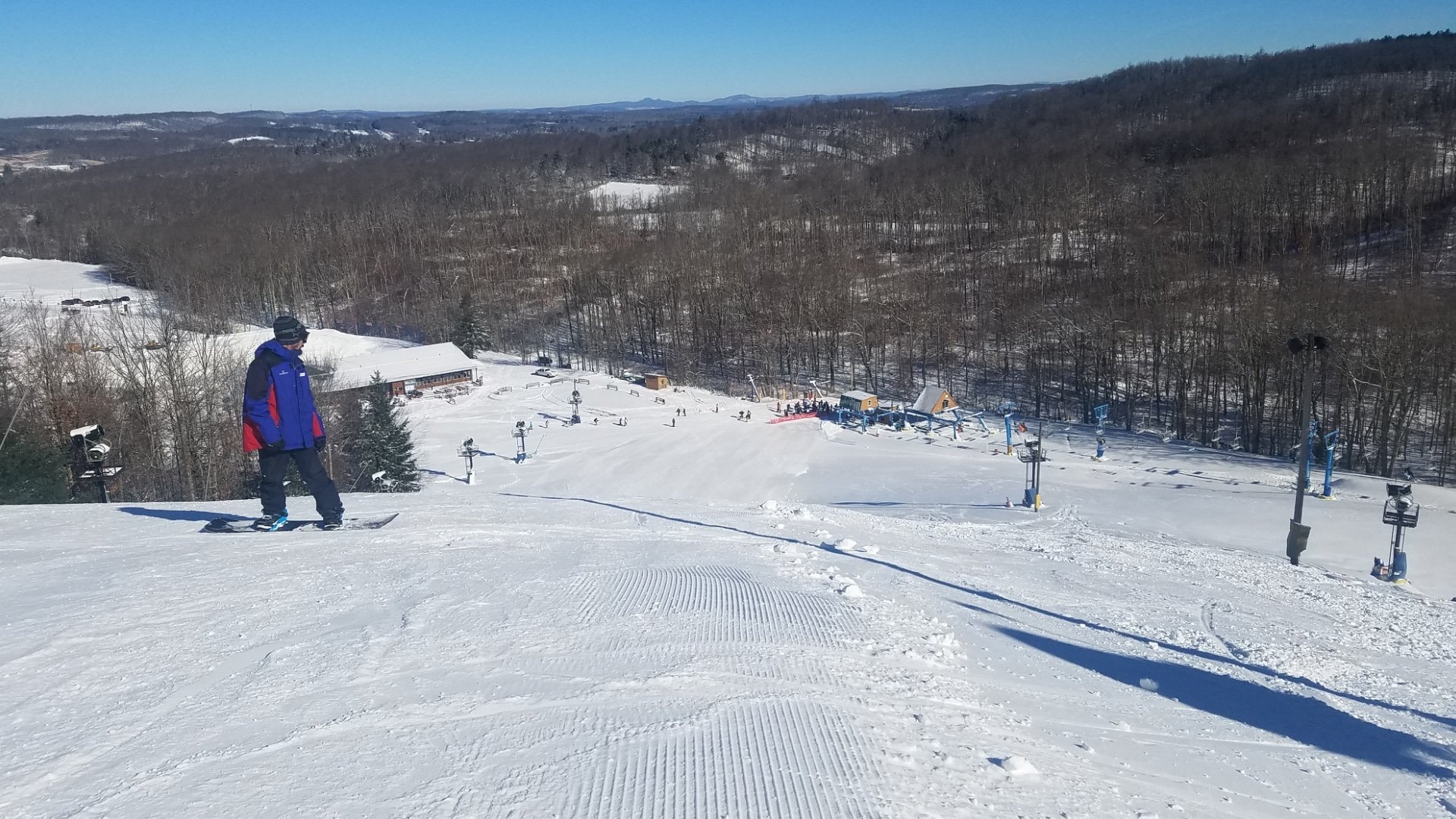 When I spoke with their Executive Vice President, Tom Wagner, I gave him compliments on their season revival, and he replied that they like to dress up the place as much as possible with the natural snow that fell recently.  Obviously, their snow making crews deserve a large applause too.

When asked if there was one thing to share with the skiers and riders out there, he said booking everything online is the easiest way to go. I’m assuming that advice resonates with every ski resort within the region too, especially as we get further into the thick of the season.

With winter finally showing signs of life we will see a jump in visitations during the upcoming weeks.  Be sure to plan ahead, prep up the gear, and enjoy that tingling sensations that comes with a ski and board season going strong again.  Until next time please enjoy your time safely on the slopes.