THEY ARE AT IT AGAIN… 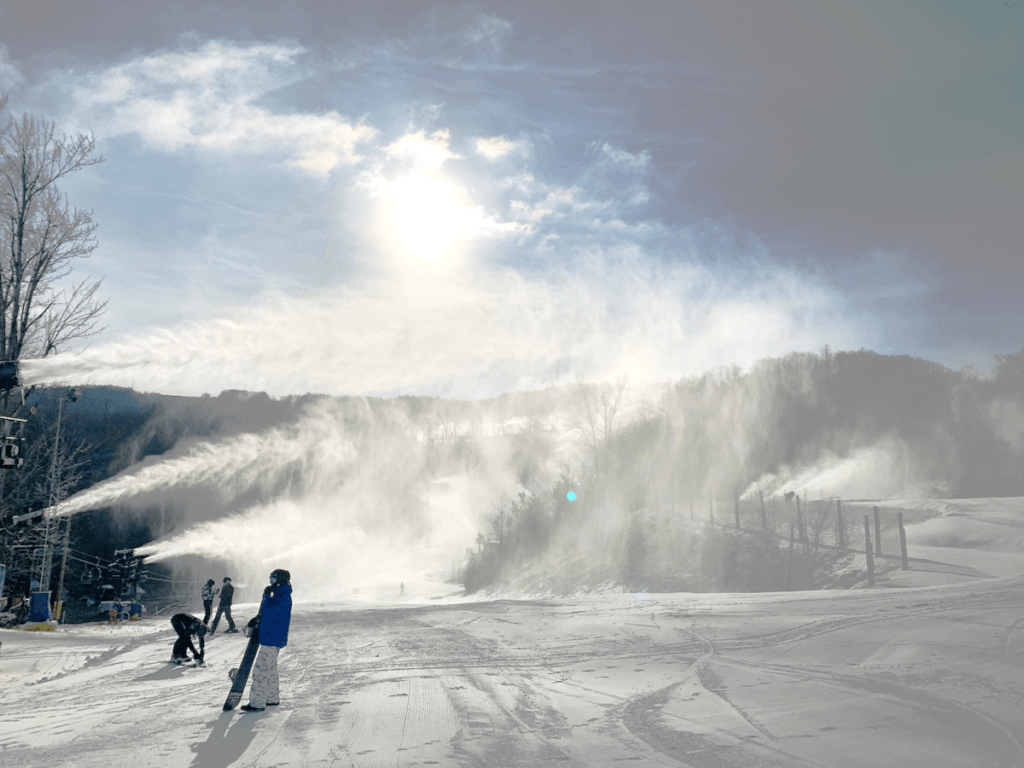 Just where would skiers, snowboarders and snowtubers in the southeast be without the hundreds of snowmakers at the resorts we love to visit every winter.

As thousands of you out there were checking the webcams on this website (over the last week), you saw some sketchy conditions at every resort in the region. Yes, there was snow on the trails, but the edges were moving to the middle. Thank goodness that overnight temperatures at some resorts allowed extensive grooming, which covered up thin areas and bare spots.

On Tuesday, members of the West Virginia Ski Areas Association conducted a news conference at Winterplace Ski Resort (which was aired live here on skisoutheast.com), basically to say, hold on folks, better days (cold weather) were on the way. While the news conference was taking place indoors, just a few meters away outside, skiers and snowboarders were still enjoying the manmade snow on one of Winterplace’s slopes. A quick return to last week’s column, the “Glass Was Half Full” for those skiers and snowboarders.

While preparing for the start of the news conference, Mike Doble, Skisoutheast.com’s fearless leader, and I reflected on something both of us agree on and that’s just how much snow does one really need underneath them when on the slopes. Well, for the skiers and snowboarders we saw on Tuesday, it was enough to have some fun on a not so great day, to be honest.

Since the unseasonable temperatures, better known as the traditional “January Thaw,” were affecting the region’s ski industry, every resort operator, along with every skier and snowboarder was checking the weather forecast, trying to determine when the warmer pattern would change to more seasonable conditions. If you don’t realize what I am talking about, that means cold enough temperatures to make snow and lots of it on the slopes in the southeast.

That turn to the better (cold) began overnight Wednesday at some resorts, not cold enough to make snow, but cold enough to move a whole bunch of snow around and make things a lot better looking than earlier in the week. Then on Thursday, temperatures dropped below that magical mark of 32 degrees and the snowguns were fired up as a massive slope conditions reboot began at several resorts in the southeast.

Even though the snowguns had started again and the reboot was underway, it was still going to take a bit by the region’s snowmakers make enough snow to provide a quality experience for skiers and snowboarders.

Here is an example of such a case:

In previous columns I let everyone know that I serve as a chaperone for the Hurricane High School and Middle School Ski Clubs. The lead teachers of both clubs were in touch with me early Thursday wanting to know exactly what the young skiers and snowboarders were going to experience during their scheduled Friday night visit to Winterplace Ski Resort and wanted to know if the trip should be postponed. A quick call by yours truly to Tom Wagner, Executive Vice President of Winterplace Ski Resort, and after a brief discussion on the conditions, Tom honestly said, “It would be best to postpone and add another visit later in February, as the amount of terrain open probably isn’t enough to keep the kids happy. Sure wish they were coming Saturday.” I relayed that message onto the leaders and the visit was postponed.

What Tom meant about the Saturday remark was that the resort’s snowmakers were going to be able to have slopes open to the top of the resort on Saturday. My point of mentioning this fact is, it just doesn’t take very long for resorts to recover from a thaw period when temperatures allow snowmakers to do their thing and that’s make snow and a whole bunch of the white stuff.

Being the mouth piece of the West Virginia Ski Areas Association, I was trying to stay in contact with my cohorts at the state’s resorts, but catching up with them, well you can only imagine, they were a little busy making sure incoming visitors knew that the reboot was well underway and the conditions for the MLK holiday weekend were improving by the minute and there was going to be plenty of snow on the slopes to enjoy by every visiting skier and snowboarder. However, I was able to get pictures of snowmaking taking place at the resort, which I passed along to weathermen in the region to show, yes, winter had returned to the higher elevations of the mountain state.

I, along with thousands of you out there click on this website’s resort cam page to get a real time look at what was going on at the resorts there were able to get a look at the snowguns operating. I think all of you that took a peek at the situation, say on Tuesday and Wednesday and then returned late Friday or early Saturday, saw the reboot firsthand. Needless to say, it was gratifying to see the coverage again from edge to edge of the slopes at the resorts.

My point to all the above words, the region’s snowmakers were ready to get the conditions back in the shape they needed to be this time of the season. I have no doubt that prior to the drop in the temperatures, meetings were held in the various mountain operation offices, to go over where the snowguns were going to be placed and which trails were going to get the reboot first. I know for a fact these plans are well thought out and now, if you go on the various resort cams you can see the snowmakers efforts were successful throughout the region for the most part.

Yes, the best snowmakers in the country are at it again and every skier and snowboarder out there need to say thanks.