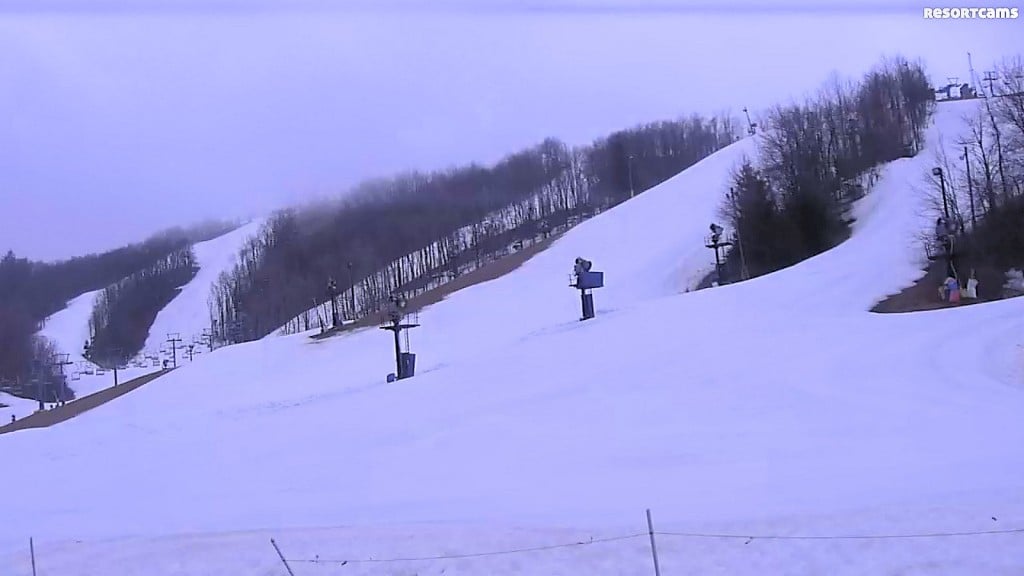 I had a little bit of an early April Fool’s joke played on me this morning. As I was looking around the area, updating snow reports, I did my normal progression. I usually look up north first at Wisp, then hit the North Carolina mountains, then pick up Virginia and end with West Virginia – covering Tennessee’s Ober Gatlinburg in the middle of the pack.

As I got into the Virginia mountains I looked at Bryce and TWO INCHES of NEW SNOW jumped off the page at me. Trouble was that AS USUAL Bryce was one day behind in posting as that snow fell Thursday night into Friday morning.

Despite those temps, conditions REALLY LOOK pretty darn good and in some cases GREAT across the region. There are PLENTY OF SLOPES TO PLAY ON and PLENTY OF SIDE TO SIDE COVERAGE…so while it IS SPRING and while THERE ARE some Spring Conditions to be found at EVERY ski area – things are holding quite nice for these last days and weeks of the season.

I say “Days and Weeks” because some ski areas WILL call it a season after TOMORROW’S TURNS.

A PICTURE IS WORTH A THOUSAND WORDS…and LIVE CAMS ARE BETTER!

I have received some emails from people asking about upcoming trips this next week and whether or not the resorts will have snow. Remember guys that our hosted LIVE CAMS pretty much tell the story across the region. Check out all of them at http://www.resortcams.com/ski-cams/ 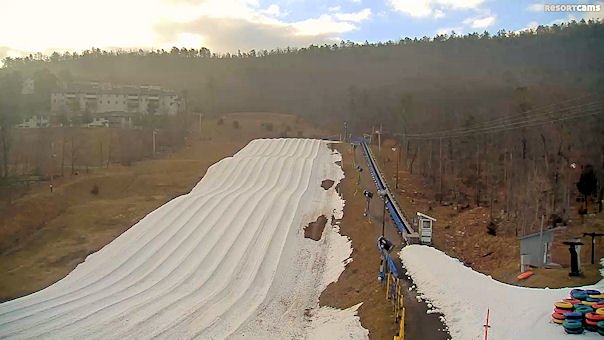 The slopes at Cataloochee, Appalachian, Snowshoe, Canaan & Timberline, Massanutten and Wintergreen stood out this morning as I toured the area via the cams.

(This shot of Massanutten’s Tubing Hil shows that tubing is still alive and well…as well.)

The most pristine shot I witnessed was this sweet view at Winterplace Resort this morning!

It was pretty foggy atop Sugar, Beech and some of Snowshoe’s cams. 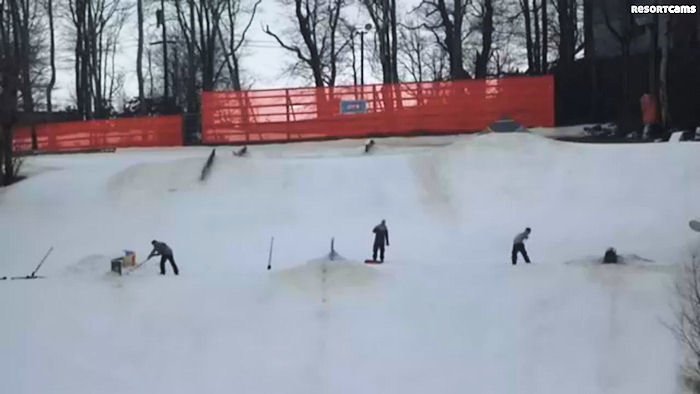 I kind of liked the shot of App (to the right) this morning as several guys were working the terrain park jumps before the sun rose. That’s a testament to the hard work and dedication that is always on display there and across the entire region.

While some of you guys who are reading this are starting to think about hanging up your skis or boards for the season and doing yard work – the crews at our various ski resorts in the region are probably working as hard or perhaps harder than they have all season to maintain the diminishing base depths to provide a good surface to play on.

There’s still SOME season left and good coverage so you guy and gals really should think about heading out for one or two more turns on the mountain. In fact, DON’T THINK ABOUT IT; DO IT.

THE RESORTS THAT ARE STAYING PAST THIS WEEKEND ARE…

Snowshoe Mountain – As usual, these guys are blessed and those blessings are providing 39 of 60 trails open with groomed conditions. The Silver Creek trails are closed for the season so no night sessions the rest of the way which Snowshoe says will be April 5th.

The Homegrown Music Festival continues today with more family fun and live music beginning at 11am on the Shaver’s Center Plaza!

Appalachian Ski Mountain is 100% open with all trails and lots of terrain features setup.  They wrote, “Winter isn’t over until we say it is. Enjoy Appalachian’s classic end of the winter celebration on Saturday March 28 and Sunday March 29. A full weekend of crazy events you won’t see any other time of the year, with lots of snow, sun, and skin. All events are free with your ski ticket. Take your best shot at tons of prize categories! Registration will be going on all day in the Alpine Ski Shop.

Sugar is open with 17 of 21 trails and there’s been no decision (or at least not one that is being shared) about a closing date.

Bryce Resort is 100% open and plans to ride until March 28th.

Omni Homestead is open with 7 of 9 trails and they say that they will go until April 5th. Okay…

This IS THE LAST weekend of the season for several ski areas.

Winterplace Resort – is LOOKING REALLY GOOD (see the image at the top of this story for larger format OR CLICK on the image to the left to enlarge it) and 100% open with all 27 trails open. Unless they announce something at the last minute, they plan on making tomorrow their last day of the season.

Plus, this Sunday, 3-22-15, at 2pm is the Annual Pond Skimming Championship right off the deck at the Mountain House!

Canaan Valley – will close after Sunday’s session. They are playing on 30 of 44 trails today.

Timberline – is closing after tomorrow’s session as well. They play on 26 trails today.

Wintergreen Resort – will close after Sunday’s session. They are playing on 18 of 25 trails today.

Massanutten – will close after tomorrow’s session. They have 12 trails open today and 7 lanes of tubing.

Wisp – will close after tomorrow’s sessions. No night skiing.

Beech Mountain – will close after TODAY’S session. No night skiing tonight. Beech is doing something pretty cool for their season pass holders on Sunday from 11am-4pm ONLY season pass holders can ski or ride and they are cooking out lunch.  Very cool Talia!

For today, Beech is open with 13 of 15 trails. That’s everything except Oz and Crossway.

Cataloochee – has previously announced that tomorrow COULD be their last day of the season. However, they COULD ALSO make the decision to add another weekend to their season. STAY TUNED. For today Cat is open for day sessions with 11 of 18 trails.

Cataloochee LOOKS like they COULD go another weekend. This shot is from THIS MORNING and can be seen LIVE at ResortCams.com