There Really Is A Lot of Snow Still on the Trails 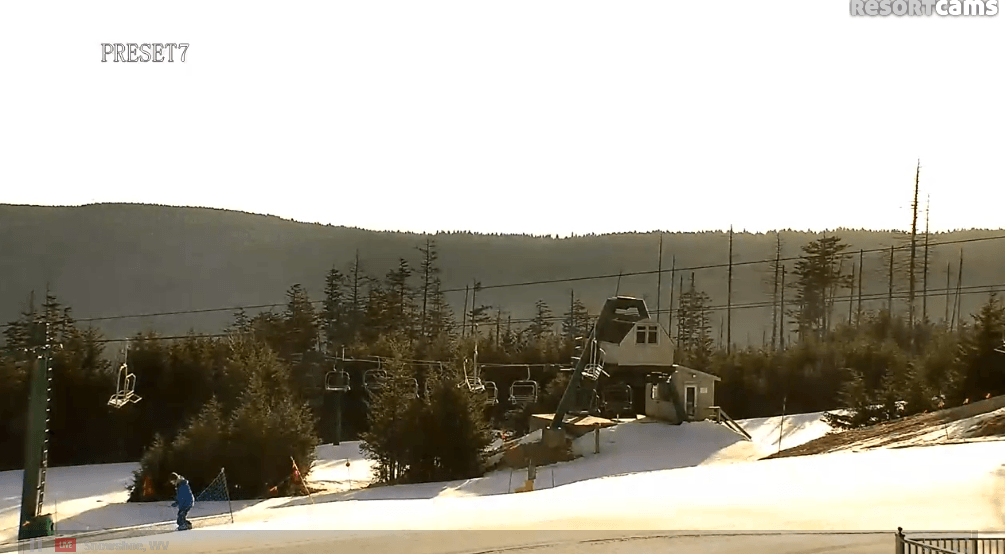 Friday Friday Friday!  I don’t know about you but I am ready for the weekend!  Especially after this week of (mostly) crummy weather.  Yesterday ended up being rather nice, but some more underdeveloped snow has already started to move into parts of the region.  Showers are already rearing their ugly head at the North Carolina resorts and Ober Gatlinburg in Tennessee and those will continue through tonight and early tomorrow.

However, things look much better (right now anyways) up in Virginia and West Virginia.  All the ski areas up there are seeing sunshine this AM.

For people making it to those resorts today, it looks like the rain will hold off until mid-afternoon so you should be fine until then.  I was going through some of the cams from up there and man it looks fun right now!  I wish I could get out and ride.  This will actually be the first weekend in a few months that I don’t go snowboarding anywhere.  I’ve got some errands and car stuff to take care of unfortunately.

Even if I was riding this weekend, I probably would be holding off until Sunday.  Tomorrow looks kind of gross at all of the resorts.  That’s a bummer since we have a couple of them closing up shop this weekend.  The good news is that Sunday looks MUCH better and it will begin a stretch of several days of seasonable temps and sunshine.  After the weather this week, it will be welcome with arms wide open.

I feel like I’m being too much of a Negative Nancy this week.  I guess the dreary conditions for most of the week have been getting me down.  The fact of the matter is, there’s still a ton of snow on the trails at many of the resorts.  For instance, Winterplace is currently reporting a 60-82″ base and are still 100% open.  With the warm, mild weather recently you’d think that couldn’t be correct, right?  Wrong.  Take a look below at a shot from the webcam this morning and just look at the height of the snow on the sides of the trails.  I’ve drawn some arrows to point it out. 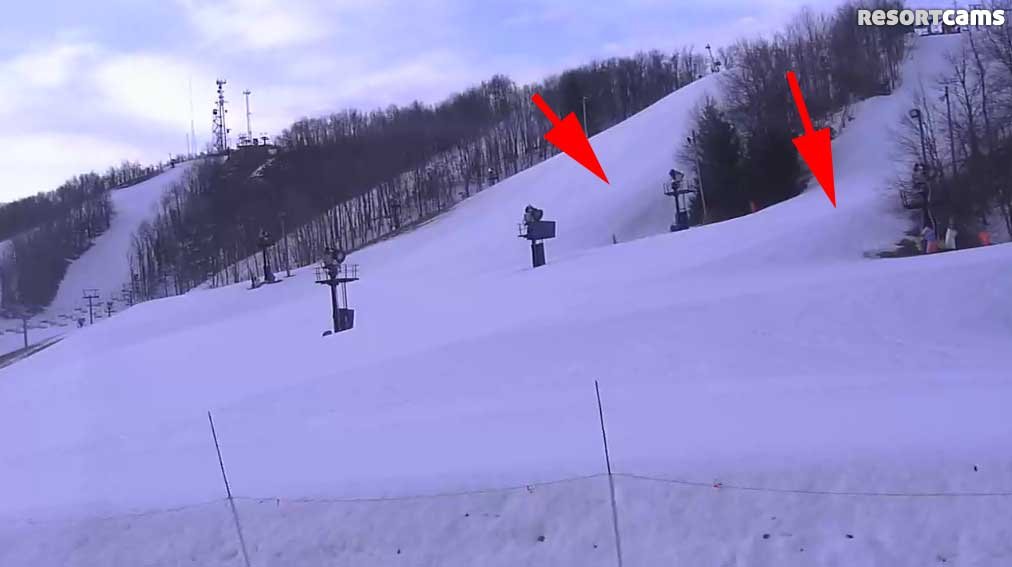 The same goes for Wintergreen, who are currently reporting a 20-50″ base.  Take a look at the slab of snow that they have on their slopes. 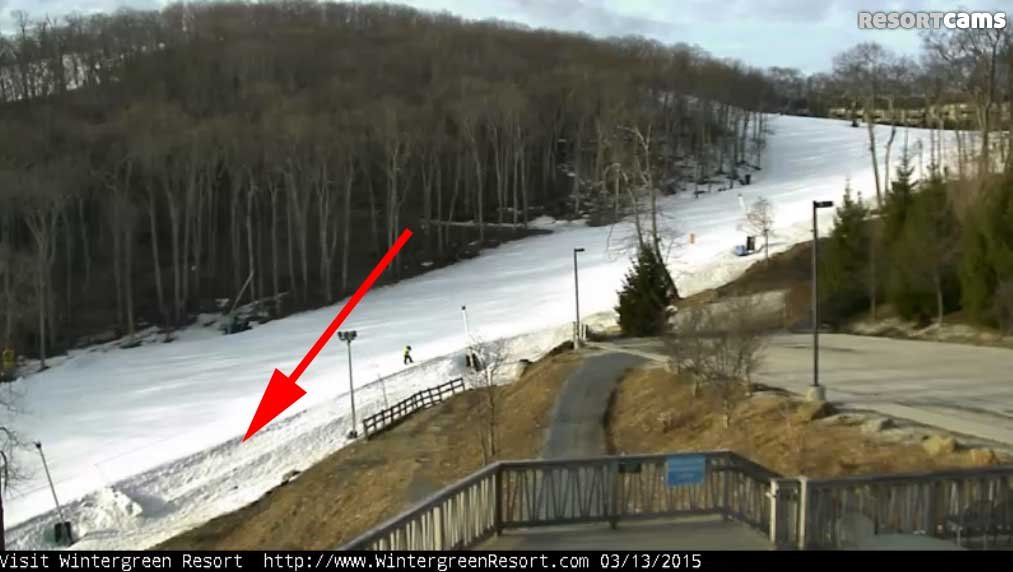 So, even with the less than ideal weather this week there’s still plenty of snow at many of the resorts to keep them going through next weekend, and maybe even longer.

The Final Weekend for Some

I went over all the closing dates and what not on Monday, but I figured I’d give a brief recap of who will be done for the season after this weekend as there are a couple.  There’s also a couple of changes to what I said on Monday.

– Ober Gatlinburg will close up shop on Sunday.

– Wolf Ridge has been closed all week, but they plan on opening for one final day tomorrow.

– Cataloochee continues to offer day sessions only for skiing, however their tubing park at the bottom of the mountain is open for one final weekend beginning tomorrow.

– Bryce Resort is open through next weekend.  I speculated on Monday how I thought this weekend could be it for them.  However, I was wrong and they are planning on being open through the 22nd.

– Wisp Resort is also planning on being open through next weekend.  I mentioned on Monday how they only had operating hours listed as through March 15th.  They still haven’t updated this yet, but I did get confirmation that they will be open through at least the 22nd.  They’ll have day sessions only during the week next week with night skiing on the weekend.

So there you have it.  Only two resorts are closing this weekend in addition to Sapphire which closed last weekend.  For it being the middle of March, only having three closed resorts is pretty good for us here in the Southeast.  I’ll go over all of next weekend’s closings again next week as we get updated info.

We’re still in the midst of the anniversary of the Blizzard of ’93 as it lasted from March 12-14.  I gave some overview of the event yesterday and asked you guys to send me some personal stories.  Matthew Losh (WVULINK on the messageboard) sent me his experience…

Man you brought back some memories with the ’93 blizzard. I was also young (12 yrs old), but remember the magnitude of that storm. I was in my hometown of Martinsburg WV, which is in the eastern panhandle of WV, but it was considered part of the metro DC area. Snow was common around there but that storm brought it to a whole new level. The map shows that we were in the 10-20 inch range but I clearly remembering taking my mom’s yard stick outside and getting depths of 21-25 inches. No skiing for me as we couldn’t even get out of our neighborhood for a few days (and Whitetail Ski Resort was about an hour’s drive away), but I remember building the best snow forts, snow huts, and igloos ever, despite the wicked cold! There were huge snowdrifts during the storm and the cold temperatures after the snowfall created hard packed snow that was great for cutting blocks and digging in.  I had snow tunnels dug throughout my yard. Might be some exaggeration here but I feel like we were out of school for like 2 weeks. (My mother, who was a school teacher can’t recall but she says it was definitely at least a full week of missed school.)   Of course being a kid all I remember is the fun stuff and missing school, not all the problems it created.

Snow days were like Christmas when I was young.  Thanks for the email Matt!

Joe Stevens also emailed me his experience with the storm.  He was up at Snowshoe and it sounds like conditions were EPIC.

I remember getting the advance forecast from our weather service that we subscribed to Accu-Weather and having to call them to make sure their forecast of over 30 inches of snowfall over the active weather period.  After contacting the meteorologist on duty, I learned to my dismay that the actual snowfall total could exceed 40 inches over the participation period.  We would find out about 38 hours later that forecast was true.

As I remember it started snowing during the night of March 12 and when I woke up to go to work I already had snow over the axles of my truck in my driveway at 2800 feet about seven miles north of Snowshoe and had to dig it out, all the time thinking it was going to be one of those days.  Boy was it ever as it proceeded to snow for a total of 38 hours dumping 44 inches of snow on Snowshoe Mountain Resort at the summit.  That sounds great for a ski resort, but believe me it was tough to get around as you can imagine there were huge snow drifts everywhere and when cars are parked in a lot, it’s tough to plow.  Another problem was that we had already received a bunch of snow prior to the blizzard, which create problems on where to put the snow that was falling.  As they say it was a perfect storm.

While we were dealing with the blizzard, WV Governor Gaston Capterton shut down the interstates and basically told everyone to not drive.  Well we had folks still trying to come in and some folks trying to get out, but for the most part everything came to a standstill.  The resort never lost power and we made the best of a very challenging situation and even sold t-shirts that read “I survived the ’93 Blizzard” sight unseen and mailed the to the folks (about 1,000) after we got them printed.

One interesting story from the blizzard is that we used our groomers to plow some of the roads and parking lots as they had the best traction.  Well to make a long story short, one of our groomer drivers went to push a pile of what he thought was snow and it turned out to be a Volvo station wagon that was totally buried.  Needless-to-say the resort bought the guest a brand new Volvo.

All it all it was an experience I will never forget, but in the end the skiing was AWESOME!

I would have LOVED to be trapped at Snowshoe during that event.  Joe also included a good article from WCHS in West Virginia that gives a good overview of how it went down up there.  The link is below in addition to a video they made.  Thanks Joe!

That is all for me this week.  Enjoy your weekend and let’s hope next week is sunnier and drier!

Previous Post
The Return of Blue Skies and Sunshine!
Next Post
Winter Meets Spring at Massanutten Earlier This Week!