Before I get into my rant for today, let me state that there are some GREAT videos over on the video page. You should check out the latest posted vids. After the first one plays…there are a couple more worth spending a few minutes viewing. Ed Schneider of Snowshoe posted a great WV Open Highlight video with some awesome camera work as usual. Travis Roberts from Winterplace also has posted his "This Week at Winterplace" video. Conditions are amazing right now. no doubt.

Check out the vids at www.SkiSoutheast.com/videos.php

WANT MORE SNOW? GET READY REGARDLESS…

The approaching snow storm for Tuesday evening into Wednesday is looking rather nice. Some weather peeps are already forecasting ANOTHER 2-5" for Beech and Sugar, and a whole lot more for the Virginia and WV ski areas. Our meteorologist Brad Panovich will bring us all up to date tonight for certain. Be sure to check that out. Conditions could not be any better than they are right now.

THAT BRINGS ME TO MY RANT…

…conditions posted in SkiSugar.com this morning. Reported 9" of snow when everyone else is reporting 2"

I realize that this will not sit well with everyone…but it has to be said. Sugar is once again over-reporting snowfall from Sunday. This morning as of 8am they are now reporting NINE INCHES of snow in the last 24 hours – on Sunday – and 14" from the snowstorm – since Wednesday. That is just not accurate. There's simply no other way to address it.

Let me preface the rest of this BLOG by stating that I personally LOVE skiing at Sugar. I have already skied there a couple of times this winter and plan to ski there again this week. The conditions there are nothing short of AWESOME right now. Let me HIGHLY RECOMMEND that you book a ski getaway and ride at Sugar this week.  Are we clear? I hope so, because I don't want to give any kind of impression that things are anything except marvelous for an abundance of snow on their mountain.

"So what? Why do you care?", you ask. Why do we even give a rip what Sugar reports? Here's why. While Beech Mountain, which is one ridge away is reporting 2" in the last 24 hours and OFFICIALLY 12" since Wednesday, Sugar is doing their thing. We receive THOUSANDS of emails every winter from potential visitors from all over the Southeast who have never seen natural snow. While most of us are just hitting the slopes, MANY, MANY, MANY people are heading to where the natural snow is. They are looking to get their kids out in it and play a bunch, build snowmen and have snowball fights.

They MIGHT ALSO be heading to the slopes to ride some, but what draws many to the mountains is the natural snowfall. When ONE ski resort over-reports those numbers, they are doing an injustice or disservice not only to those who make the drive…but also to the other ski areas. Now it could be argued that once they get to the mountain and see 6" of snow instead of 14"…all is forgiven and they just jump in and have a great time. That is true, but many of those visitors might have decided to head to Appalachian, Cataloochee or Beech Mountain had the natural snow numbers been accurately reported.

At this point I should add that Sugar HAD been doing a fabulous job of accurate snow reporting over the last few years, so we're not sure what is going on lately, but this season things have gone haywire. Within each of the last several snows, they have reported considerably more snow than they actually received and more than all others surrounding them. In many cases, as in this most recent snowstorm, they have reported more snowfall than what actually fell at Snowshoe, Canaan Valley and Timberline.

When potential guests surf the net and see 2" at Beech, 0" at Appalachian and 9" at Sugar – where do you think they will head? E-x-a-c-t-l-y.

I had hinted on Sunday morning that the 2" that was reported by Snowshoe on Sunday morning SURE LOOKED LIKE 6" and all I know is that I had to trek through some deep snow to get my car and pack up.  As I drove back to the High Country on Sunday, I suspected some additional over-reporting had occurred. I called a friend of mine who lives up near the top of Matney and he reported 4-6" of snow on the ground. So I made the drive up to Banner Elk and it was snowing beautifully. There was 3-4" on the ground on Hwy 194 through the foot of Beech. As I made the turn onto Hwy 184 and drove through Banner Elk, there was MAYBE 2-3" on the ground. Ditto that at the foot of Sugar. Maybe the wind blew it all away; maybe snow grimlins took it all away, but they left behind 4"…maybe.

…an undisturbed spot at the top of Sugar across from Sugar Ski and Country Club…Lots of snow, just not 9", or "14" or even 8"

So I drove up to the top of Sugar. I took Grousemoor up to the top and stopped in at Sugar Ski & Country Club…where the deepest snows always are. I stepped out of my car into pretty deep snowdrifts that were indeed around 7-8" of snow. I climbed to an area that was obviously undisturbed and dug down. I didn't have a ruler, but I stuck my A&W Root Beer bottle into the snow until it hit the ground beneath. 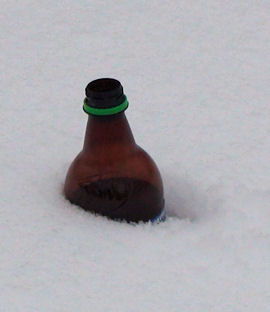 All of this is to say that after making a couple statements about the Sugar snow on Saturday and Sunday – I received a ton of emails. ONE gave me a tough time saying that he had always skied Sugar and knew that they over-reported some, but questioned my reporting of such as if I was whining.

However, if YOU were blogging for a ski and snowboarding website and saw that 1.6" of snow ACTUALLY fell in the last 24 hours and ONE (and only one) resort was calling it 9" – wouldn't YOU feel led to let your readers know? I hope so…

Hopefully word will get back to Sugar – I know that they read this stuff as well – and perhaps they'll find out who it is that is so obviously overstating the natural snows and get this resolved. Otherwise, we'll keep on telling it like it is.

For the record, as reported prior, Sugar HAD been doing a GREAT job of snow reporting over the last several years so we don't know what the heck has happened this season. One other resort LAST season was notorious for over-reporting snows. They have actually UNDER reported this season.

Here is a quick glance "GRADING" of resorts reporting natural snows this season:

Wisp: They goof occasionally but self-adjust throughout the season and get it right.

Canaan & Timberline: They have an OFFICIAL NWS/NOAA reporting station at : http://data.canaanmtnsnow.com/

Snowshoe: They have an official NWS / NOAA reporting station at the top of the mountain at 4848' and their 2" official snow report Sunday AM was stunning. Give ME that 2" every day!

Winterplace: Not aware of any official reporting station and there is NO CoCoRaHs reporter there. However we have two businesses there that we always coordinate with and Missy and those guys at Winterplace simply always get it right.

Bryce, Massanutten, The Homestead and Wintergreen: Can't tell you HOW MANY times that each of these mountains have seen a TRACE of snow this season only to report NO SNOW. Virginia has been starved for snow these last two seasons and yet when it falls they simply get it right.

Ober Gatlinburg: Kathy Doyle and John Cossaboom up there are always "tell it like it is peeps". They tend to under-report and rarely report TRACES of snow. Their snow reporting always jives with CoCoRaHs up there one ridge over.

Appalachian Ski Mountain: Most often App reports snowfall as "YES" instead of even claiming a number. We use their report and check it with CoCoRaHs and App's numbers are on the money.

Cataloochee Ski Area: Preston Jacobsen with LocalYokelWeather.com does their OFFICIAL reporting station and we take those numbers and check them with CoCoRaHs and they are always on the money. Tammy and Chris rarely even report snow numbers. We wish they would each morning, rather than at 9pm the night before. They'd get more mileage out of reporting early AM instead.

Wolf Ridge Resort: Wolf has actually UNDER REPORTED by 3" this season. 'nuff said.

Beech Mountain Resort: As mentioned earlier, Fred's Mercantile is an OFFICIAL NWS / NOAA reporting station and there is a second CoCoRaHs reporter at Beech and their numbers are always very close. If Fred's or CoCoRaHs reports 1.6", Beech will report 2". We think that is within the margin of error.

As you can see, only ONE ski area repeatedly has been over reporting snowfall and we simply don't think it's cool…period.

OUR HOPED FOR RESULTS…

As many of the admins, CEOs, COOs and owners of ski areas will tell you – the internet HAS made things different for them as a group. Webcams and independent reporting services have changed things for the better in terms of resorts being totally forthcoming with what visitors should expect when they reach the mountain. I've spoken with many CEOs who share with me that they LOVE the fact that we independently help to hold resorts accountable. Most ski areas have always been pretty good about telling it like it is…but not all…and not always.

There's an outfit based up in Vermont that started a service more than 15 years ago called "No Bull Snow Reporting" because, unfortunately some ski areas tend to stretch the limit of reason when it comes to base depths, etc.

All we're asking is that every resort "keep it real". When all but one is, it just isn't cool. I know I'll catch some heck from this BLOG, but it isn't the first time and it isn't our fault. It is our hope that our readers will understand and appreciate that we simply HAVE to speak up when one or more ski areas is inaccurately reporting.

Hopefully you guys who are reading this will still give Sugar your business as they deserve it and the conditions there are absolutely AWESOME today. There's lots of snow everywhere and conditions will ONLY be better with more snow coming in mid week. Please make those bookings based on a great time on the snow…and just know that you can always check in with our snow reports for the facts.

In closing, to the ONE emailer who felt I was over doing the comments of this weekend, how do you like me now?

To the ONE emailer who wrote that "snow melts" – yes it does. However, that still doesn't explain the 9" reported as snow within the last 24 hours. It didn't happen. That's all we're saying…for now.