Those are Appalachian Ski Mountain in Blowing Rock, North Carolina with all 11 trails open and all three terrain parks and no bare areas or even a thin spot. Snowshoe Mountain in West Virginia is the only other ski area open in the Southeast and Mid Atlantic. Snowshoe is open for one more week and today they are offering 27 trails. Both App and The Shoe are open for day sessions only for the rest of the season. For Appalachian the season won’t end until April 11th unless they decide that they have enough snow to stay open until THE START OF NEXT SEASON! (Just kidding. They wouldn’t do that to me would they?)

Snowshoe has one more week of ski ops available as they will close for the season after skiing and riding on Monday, April 5th.

THAT’S IT for this week. This WEEKEND, Wisp and Cataloochee will reopen for another weekend of fun. More about them as we approach the weekend. 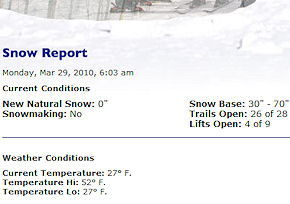 <Winterplace’s Snow Report from this morning. – THEY ARE NOT OPEN!

Winterplace Resort. Are they open or are they closed? Admittedly I was fooled…MULTIPLE TIMES! I was confused, but I don’t think it was my fault. My defense, your honor…oh wait – nobody’s suing me!

A couple of weeks or more ago I had posted that Winterplace was closing for the season on March 21st. They’re wording on their website led me (mistakenly) to think that. Joe Stevens of the West Virginia Ski Areas Association called me to set me straight. I REREAD their statement and realized my error and corrected it to reflect the March 28th closing date that they posted on their website. Again – I was wrong. Last week they began reflecting a Saturday, March 27th closing date. I changed it and advised you guys of the "corrected" date.

As I was posting Sunday morning’s snow report I came across Winterplace’s updated snow report posting on their own website which showed that they were STILL OPEN yesterday with 26 trails.

WRONG! Hopefully by this time nobody was listening to me and drove I-77 to go ski there…because they were not open.

On Sunday I wrote, "Communication breakdown somewhere…Anyway THEY ARE OPEN today for their last day for their Grand Finale Day and Pond Skimming Championships. That’s apropo since it will be a wet day today. They have 26 of 28 trails open for today and tubing as well. They will be closing for the season later today.

…until they show up open on Monday.

Just kidding. I think we’re all on the same page this time."

UMMMM – NO! WRONG AGAIN.  I thought I was kidding about Winterplace Resort being open today – until I looked at their website this morning. See the image capture here. They are reporting that they are OPEN TODAY with 26 trails, right?

NOPE…THIS TIME I’VE GOT THEM! THEY ARE CLOSED. THEY WERE CLOSED ON SUNDAY TOO!

I think that Winterplace Resort President, Terry Pfeiffer was playing an early April Fools Day prank on me and perhaps others as there appears to be a glitch on their website that makes them APPEAR to be still open when in fact their last day of skiing and snowboarding was, in fact, this past Saturday.

Hopefully we are FINALLY on the same page.

I received several emails and a couple of phone calls on Sunday afternoon and this morning from peeps telling me that they enjoyed my "dream" post on Sunday…but NOT ONE negative Nellie! Our traffic must R-E-A-L-L-Y be down a lot 😉

I heard from Bruce Sullivan who coordinates the CoCoRaHS network of snow and rain reporters and I think we’ll be doing a story of their network of volunteers soon. He was contacting me to confirm some numbers that we are posting for Wisp Resort in Maryland. We are reflecting the snow totals provided by a volunteer atop Wisp’s resort who has reported 226" of snow. Both of the CoCoRaHS’ official measurers are reflecting officially less than 206" on the season – while Wisp is reporting 263".

Wisp was "off" too LOW earlier in the season and we helped to bring their numbers UP. Then on the last BIG snow that they had we noticed that they accidentally counted the single day snowfall of 31" twice. If you look at 226+31 – that would account for the 257 and then they did the same thing again on February 28th.

We’re a HUGE fan of Lori Epp, Wisp and their entire crew and operation – however they simply have not received the 263" of snow that they are reporting. On the "glass half full side" they DID pick up 226" of snow on the season which is MORE THAN TWICE the average annual snowfall that they typically receive which is 100". In fact, they’ve exceeded the 100" mark for several years in a row and perhaps their annual average over the last ten seasons is more like 120". However their 226" this season is more than double their longterm average.

Bruce Sullivan of CoCoRaHS and our volunteer reporters all support the fact that our 226" is accurate.

That’s it for today. Here’s some tidbits from the two ski areas STILL OPEN TODAY!!!

Appalachian Ski Mountain is 100% open with all 11 trails and all three terrain parks for day sessions all week and until April 11th.

Snowshoe Mountain is open with 27 trails for day sessions. I loved Laura’s post this morning. Check it out, "All month it seems that we’d been missing forecasted rain, but yesterday our luck ran out. Rain did fall for most of the day and today we have some additional thin and bare spots to show for it. Milder temperatures overnight and the wet conditions didn’t allow our groomers to get to too much terrain, so only a handful of our green slopes are groomed this morning. With a week to go in the season we have ramped down some of our operations. The Soaring Eagle and Powderridge lifts will be closed for the remainder of the season. Lower Shay’s is also closed for the season. But we don’t want to get all "Negative Nancy" on you because there are 7 days left to enjoy what’s left of this amazing season. We continue to have more than 25 slopes available, there is snow across all of our open terrain, and in some places it is still deep! We’ll do our best to patch some of those thinning and bare spots over the next two days, and after that some amazing weather moves in. After a winter that brought more than 19 feet of natural snow, we’ll welcome in spring and salute the end of the season with mild temperatures in the 50s and plenty of sunshine. That’s perfect conditions for our great "Last Hurrah" festivities scheduled for this weekend–including the infamous pond skimming competition. And what’s Easter without an egg hunt? You won’t have to miss out this weekend as Snowshoe will host an Easter Egg Hunt for kids of all ages. And don’t forget, from now until April 5th, if you stay two or more nights, you’ll ski for free! And if you can’t stay 2 nights, just bring your season pass from any other mountain and you’ll ski for just $20 a day! Or better yet, purchase your 2010-2011 Snowshoe Season Pass, save up to 25% and ski for Free! Call 877-441-4386 for complete details and to join us for the last week of what has been a truly incredible season."

Cataloochee Ski Area is CLOSED this week but plans to reopen for Saturday and Sunday.

Ober Gatlinburg – After 100 days of skiing/snowboarding, 50+ inches of natural snow and some of the best conditions we have ever seen, the slopes at Ober Gatlinburg are now closed for the 2009/10 season. Thank you for joining us on the slopes and making this a successful season ~ we look forward to having you back next winter! Note: Snow tubing is scheduled to be open daily until Sunday, April 11th.