The Word of the Day is COLD

It is going to be a cold one out there today.  We’ve pretty much already hit the high for today by 7:00 this morning.  So don’t let the morning temps in the snow reports fool you, if you’re hitting the slopes today it will be colder than what is recorded on the reports.  This historic arctic blast we’re seeing will drop the temps to -5 at Wisp tonight and -1 at Ober.  Just about everyone is under a Winter Storm Warming and Wind Chill Warning today.

Just to give you an idea, take a look at the nosedive Beech Mountain recorded this morning – looks like around 2am. 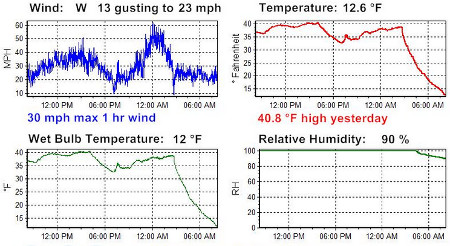 The good news is that a lot of the resorts are taking advantage of the cold to make snow and Mother Nature is making a bit of her own as well.  All of our member resorts are calling for a 70%+ chance of snow today and my bet is that they get it.  Here in Boone, NC I am staring at snow coming down at a pretty good clip and blowing around like crazy.  The wind is preventing much of the snow from settling, but this certainly did not prevent the roads from getting a bit slippery.  This caused the County to close the schools for today (snow day rates in affect!).  I imagine this scenario is repeating itself across most of our mountain and resort towns.

I was at Appalachian Ski Mountain yesterday for the opening of the Alpine Skiing & Snowboarding North Carolina Special Olympic Games.  It was quite foggy and misting, but nothing could dampen the spirits of the athletes and spectators. 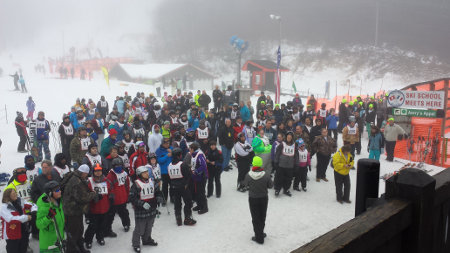 Everyone was in great spirits and ready to show their stuff.  Just about every region of the state is represented at the games and you could tell by the cheering as they announced the teams that more than a few people made the trip to Appalachian to see their athletes compete.  You could feel the excitement and I look forward to seeing the events today.  I’ll head up there as soon as I finish this post.  Be sure to check out our Twitter feed for the latest.

I also stumbled upon a good ole fashioned rail jam at App.  That place was really pumping yesterday.  Gave me a good chance to play around with some of the picture setting on my camera. 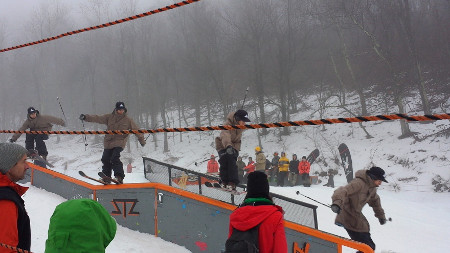 I also took quite a bit of video as well and I’ll  try to get that up as soon as I can.

Taking a look at the snow reports across our region this morning, you’ll notice that not much has changed in the past 24 hours.  Winterplace is down a few runs (21 of 27) as they have closed Wood’s Run, Last Chance, Last Run, and Over Easy to optimize snow making on those slopes.  Other than that things are pretty quiet (and cold).

Before I go I want to say Hi to everyone I met yesterday on the mountain at App.  I met folks from Charlotte, Newland, Mooresville, and Winston Salem.  It was great meeting all of you and I hope you enjoy the site.

Take care out there today and layer up if you’re heading out.  Did I mention it was going to be cold?  The wind will be the really big deal today.  There are numerous warnings of the potential for the high winds to knock out power.