The Wolf Waits In a Quiet Place

Photos and Story by Brian Dix 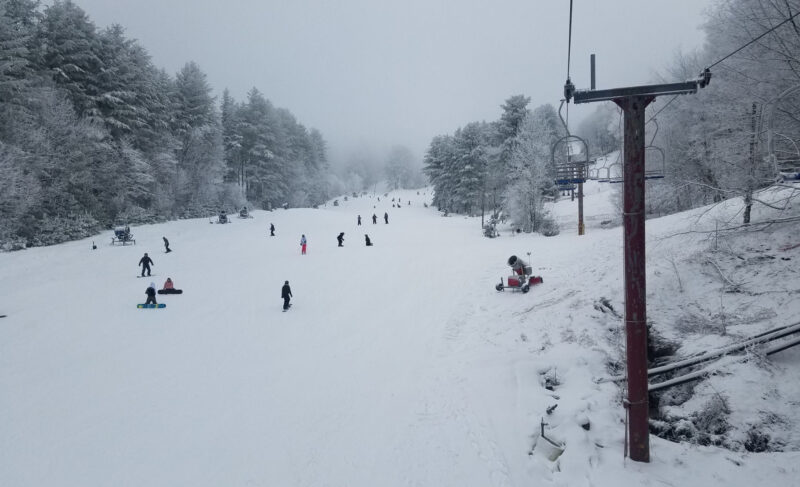 Hello skiers and riders of the southeast. We are almost a third of the way done with this ski season, and yet the action is still rising before we hit the climax of the storyline. Hopefully you have had a chance to create some memories to tell.

This past weekend I had a fortunate opportunity to make a day trip from Charlotte to Wolf Ridge Ski Resort. It was timed right after a recent snowstorm, and it gave me exactly what I was seeking… a chance to get out of the city and into the snowy mountains.

I have always felt that day trips into the mountains are great opportunity to set aside all the stress and mayhem that awaits, because stress will always be there upon your return. You can clear your thoughts, breathe in some fresh air, and enjoy the sounds of nature. An added bonus is the fact that you see the beauty of this land firsthand, which is always worth the cost of your time.

Wolf Ridge Resort sits adjacent to the Tennessee / North Carolina border, and it is about five and a half miles off of I-26 at Exit 3. The direction I traveled through went past a sparsely snow touched Asheville and onto higher ground. Fortunately winter was all around once you ascend to roughly 3,000 feet, and with each foot of gain the snow pack got deeper. The peaks that surround this stretch of land top off at 5,516 feet with nearby Big Bald. 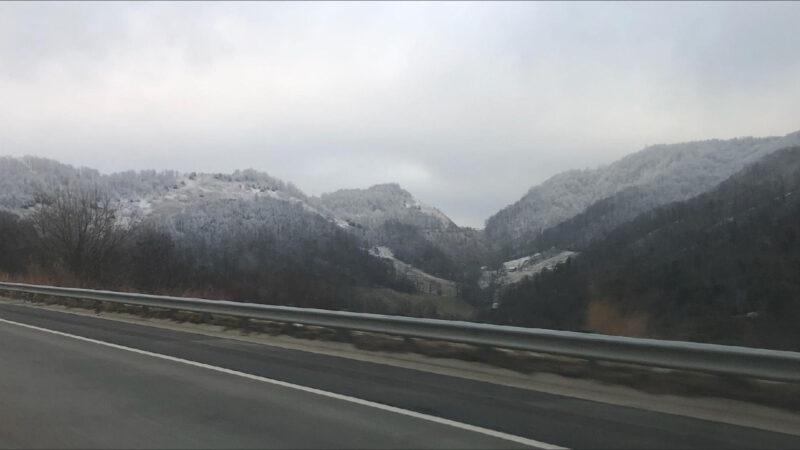 Wolf Ridge Resort is a modest yet mighty area. They offer fifteen runs of all abilities with 700 vertical feet, a summit of 4,700 feet, two spinning chair lifts, and two carpet surface lifts for beginners. More importantly they have fantastic views, plenty of seclusion, and a lot southern charm. Some of their neatest runs with the best pitches originate from the top which includes View Finder, Howling, and The Bowl. Down below it widens up more with the show case run for all to see, Broadway. This wolf in lone in its uniqueness, but for good reason.

A fun fact about Wolf Ridge, according to a simple Google search, is that their latitude is 35.98 degrees north. The same Google search says that the second tallest mountain on the planet, K2, has a latitude of 35.88 degrees north. That’s not much of a difference at all, and if you factor in how wide that pile of rocks is within the Himalayans, I think you could head in either direction along that line from Wolf Ridge and you would eventually be skiing on K2’s steep slopes. I’d head west since the total distance is shorter, but it will still take several hours nonetheless.

A bonus fun fact is that the base of K2 is estimated to be roughly 16,400 feet and the summit tops out at 28,251 feet, which means the vertical rise is approximately 11,850 feet or so. Just over two miles on top of three additional base layer miles. That also means it would take almost nineteen top to bottom runs to complete one journey down the Savage Mountain. I think I may have a new goal for the next time I am at Wolf Ridge…

Coincidentally I was riding on a durable set of K2 skis, and I can report that the open terrain was gliding excellently with little to no blemishes whatsoever, and it was complimented by plenty of untouched softness on the edges.  Mother nature coated all of the surrounding terrain with bonus beauty too, and it was obvious that the elevation was a cause for celebration. 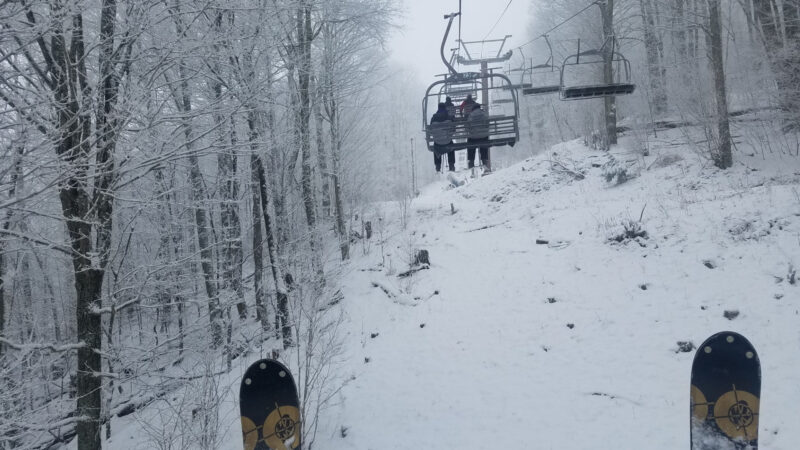 They did not have the snow guns going though, which is normally welcomed, yet it was perplexing to some that day since the temps were cold. On top of that they did not have top to bottom skiing available on this day. I was told by Wolf Ridge staff that they have had recent temp inversions and humidity, especially at night, and that hindered the snow making. I’m sure Brad Panovich can explain in simple terms better than anybody else, but let’s just say not all the ingredients were there to make it happen.

Soon enough they should be open up to the top, and perhaps hopefully by the time this publishes. Simply choose to make due with what is available and you can still get enough exercise in for those ski legs. On top of the soft surface there were several side hits that certainly can launch you skyward. Advanced skiers and riders could also work on other aspects of their descent such as skiing backwards safely. Achieving the next day soreness proves that small doses of runs can still add up to a big gain.

It has been said before by a few folks on this website, but do yourself a favor and arrive early to avoid the crowds. You will not experience any wait for several laps before finally getting into a crowd around lunch time. I don’t recall waiting even five minutes at any point during the day, and a vast majority of people were spaced out with masks up. 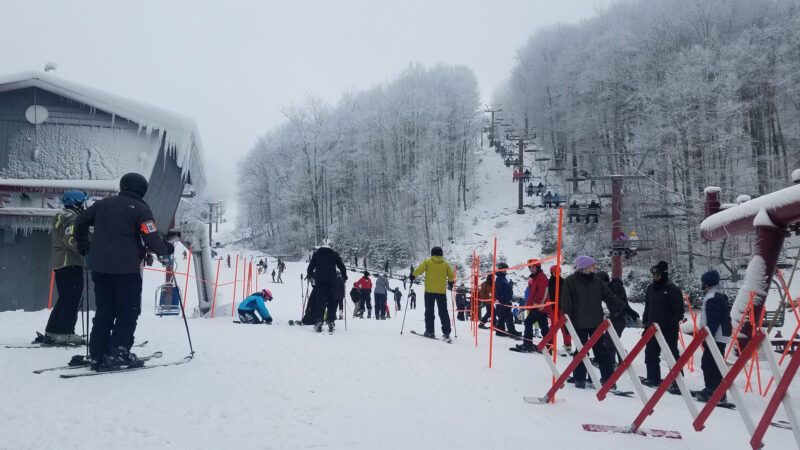 Even if the masses converge you can still have plenty of moments of thrill, laughter, and excitement. After the year we all have had, and the notion that January feels more and more like an unlucky 13th month of 2020, why not give yourself a reprieve from the havoc? Even a few hours should be enough time to reset yourself in the manner that works best for you. 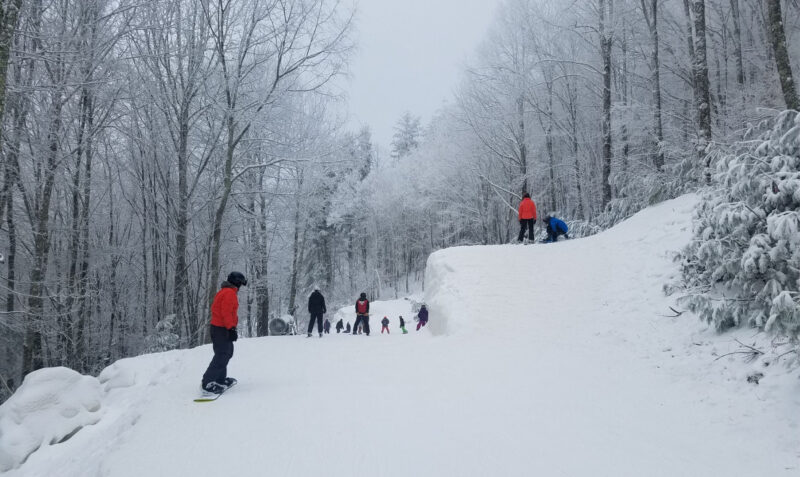