The Weather is ALWAYS the “Main Attraction” for Ski Areas 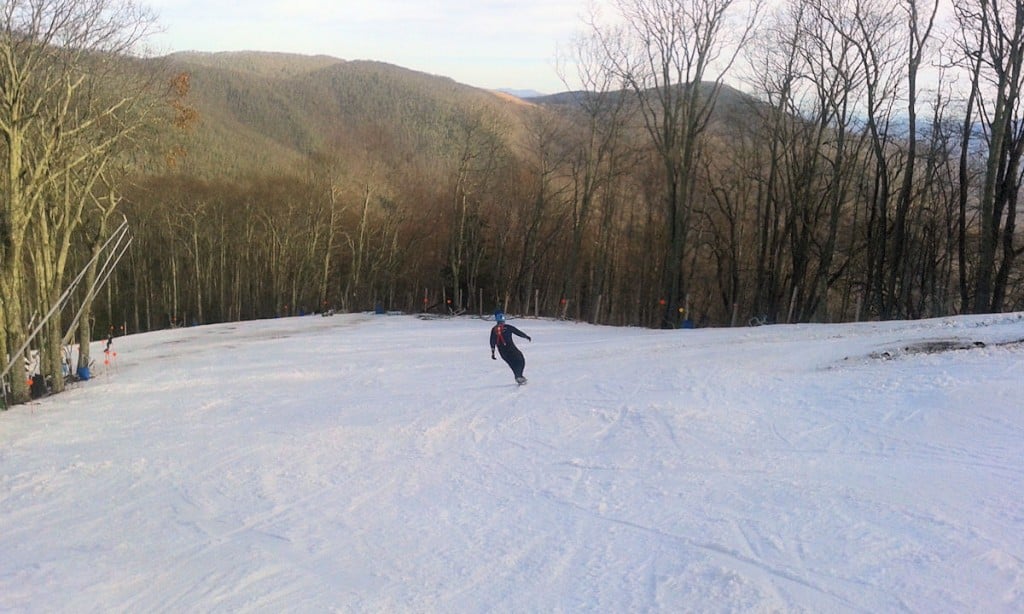 Last night I was reading David McCue’s Trip Report from his day at Cataloochee on Friday. (Read it here.)

In summary – while David really praised the conditions and snow coverage that he found at Cataloochee on Friday – his huge surprise was the fact that VERY FEW people were enjoying the benefits of Cat’s snowmaking and grooming efforts.

I can ditto his appraisal by telling you that we drove by Sugar Mountain on Friday and the crowds…weren’t. I had an opportunity to look at the webcams for Beech and ditto. There was a steady flow of light traffic, but there certainly were not the kind of crowds that you’d normally find on a Thanksgiving weekend ski trip to the mountains.

That got me to researching our Google Analytics and although we have not always used Google to track visitors – I can tell you that in all of our twenty years of covering the resorts of the Southeast – I have never seen a DROP in traffic to the site from October to November. Traditionally traffic trends way up once we hit mid-November but not so for THIS particular pre-season.

(Editor’s Note: We’ve actually been around longer than Google and back in the initial years of the “www” we’d use visitor counters. Then we progressed to iStats, WebTrends and other tracking programs. Like most everyone these days, we rely on Google Analytics for data.)

Just a month ago I was bragging about our traffic being UP 35% despite the fact that there was no snow, and no skiing happening. Fast forward to the LAST 30 days of data and I can tell you that we’re now experiencing a 47% DROP in traffic when comparing October 28th to November 27th of the 14-15 season and 15-16 (this season).

We’re receiving as many comments and emails and a lot of you are commenting about the huge uptick in content thanks to David McCue, Randy Johnson, Kenny Griffin, Joe Stevens, Brad Panovich and myself. I will admit to being re-energized this season – which is VERY strange considering the late-summer-like temps that we’ve experience for much of this “first month” of ski season.

(On Friday, I was out hunting for the perfect Christmas tree in 64° temperatures!)

Over the years, I have always commented about how SNOW trumps everything when it comes to traffic. Nothing excites the masses like some snowy weather. Every time that it snows the news media across the Southeast and mid-Atlantic reports it and the next thing you know – people are headed to the mountain and tens of thousands will visit our website. We’ve seen 150K or more visitors in a single snowy day. Without snow…and so far absent of any colder temperatures…we’re seeing an unprecedented dip in traffic.

I’ve already reported this fact – but by this time last November 27th we had already seen 17.5″ of snow at Sugar and Beech and 29.6″ of snow around Snowshoe, Canaan and Timberline in West Virginia.

To date? 0.1″ of a TRACE at Beech and Sugar. The normally snowy climbs of West Virginia? 0.5″ of snow has fallen.

On top of that it has just not been that cold. When you add that it is 10-15° warmer OFF the mountain where most skier visits come from- that simply spells little to no interest in skiing and snowboarding.

I did see some brisk traffic on the roads and downtown Boone had people swarming the sidewalks, shops and restaurants but that could be attributed to Black Friday and Christmas tree business.

As a quick “sidebar” – we’ve been reporting a the economic impact of the ski industry, etc. The North Carolina Christmas tree farms bring and estimated $120 million dollars of economic benefit to the mountains of N.C.

Back to our traffic…

By this time last season (14-15) we had already experienced over ONE MILLION visitors to our network promoting the ski resorts, live webcams and weather content. Obviously being “off” 47% – you can do the math. The numbers are staggering.

However visits to the website are “virtual”. I can only imagine how far “off” skier visits to the mountain are right now. Bear in mind that thousands of people would have already hit up Snowshoe had they had gotten opened up this past week when they planned to. More would have enjoyed Winterplace by now. Tens of thousands of combined skiers and snowboarders would have already visited Appalachian, Beech, Cataloochee, Sugar and Wolf Ridge.

Massanutten and Wintergreen resorts in Virginia would have already opened some terrain and Wisp Resort in Maryland would have opened a week or more ago and all eight of those resorts would have seen tens of thousands of skiers and snowboarders by this time.

Remember that so far this season only Appalachian, Beech, Cat and Sugar have had skiers on their slopes. It’s reasonable to estimate that skier visits to the combined resorts that would have normally already been in operation to this point on the calendar HAS to be off more than 70-80% if not more.

Hopefully This Will End Up Just a Blip on the Radar…

If you’re a snow loving, ski-area-frequent-skier-or-snowboarder, don’t lose heart because this is kind of the “bonus season” before the real ski and snowboarding season begins. Traditionally the time period from early October through mid-December only makes up perhaps 5-10% of skier visits over an entire season. Also a lot of ski areas such as Canaan, Timberline, Bryce, Homestead, Sapphire Valley and even Wolf Ridge…OFTEN don’t even try to get open until around December 10th or so. So we are STILL in that period on the calendar that really doesn’t matter a whole lot to the financial bottom lines of ski areas across the region.

So if we can get some cold air and some snow falling by December 10th, this “bad start” will be forgotten. A couple of prolonged cold snaps and a big bombing of snowfall across the region and it will be a case of “Snow and the people will come”.

So, my snow-loving fans, let’s pray for some cold and snow.

Check the snow report for opening and delays…

Previous Post
Thin coverage and bare spots. All Four Open Resorts Have Them.
Next Post
Something to Be Thankful For