The Weather and Whether or Not MLK Weekend Will be a Boon or Bust!

Up to 3" of rain was forecasted for some of our mountain communities on Wednesday and thankfully that didn’t seem to happen anywhere that we’ve been able to find.

Beech Mountain reported .96" of rain on Wednesday. Our new www.SugarMountainWeather.com weather center showed .76" of rain atop Sugar Mountain and the most rainfall we found was over at Wolf Laurel (home to Wolf Ridge) where the weather stations over there reported 1.32" of rain.

So the question of the day – via my email INBOX was – "With all the rain, how do things look for this weekend?"

Simply put – head to the mountains, there’s plenty of snow! 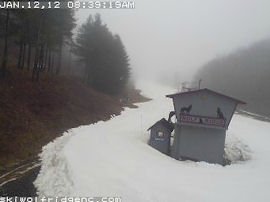 <As you can tell, Wolf is looking good this morning from their base cam and they are open for business today!

Although we didn’t see the 2-3" of rain that some were forecasting, it was heavy enough to force several ski areas to close on Wednesday. Appalachian Ski Mountain and Wolf Ridge closed on Wednesday – rather than suffering through the raw, wet day. Beech Mountain was open until later in the afternoon when LIGHTNING began popping around the area. That forced Beech to close. We didn’t hear whether Sugar shut down operations or not, but lightning and metal lift towers and chairlifts don’t make for a great ski package! 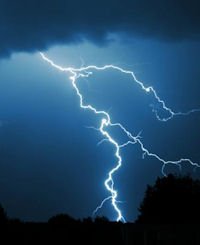 The back of my home faces Seven Devils and Grandfather Mountain and as I got home from work on Wednesday it was popping some brilliant BLUE lightning.

It rained enough (and hard enough) throughout the day on Wednesday that I was amazed to hear that it was only an inch. We heard numerous reports from television stations around the region that were all talking in terms of the fact that whatever snow the resorts had would be all but gone today.

We’re definately going to have to keep preaching the "Gospel of Snow" to these peeps because things look pretty good despite several days of milder-than-desired temps and wet stuff.

It’s pretty foggy at some mountain locations this morning but when the clouds lift you’re going to see that there’s PLENTY of snow on the slopes. Admittedly the base areas of some of the ski areas look a little battle-worn but those will disappear with some grooming and cold weather approaching. However there’s plenty of skiable terrain for today and snow and snowmaking cold temps are heading in this afternoon like the snow calvary!

As I was watching and capturing the blue lightning on film – and listening to the thunder booming against the back of my home – my girls reminded me of the old wives tale that says that it will SNOW within ten days of a winter storm that produces thunder. Old folks around these mountains have long claimed that any winter thunder will be followed by snow with 7-10 days.

SNOW IS FORECASTED FOR TODAY AND THE NEXT SEVERAL DAYS!!! 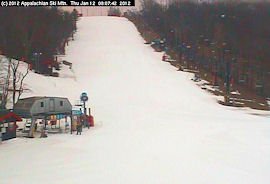 I’m certain that Meteorologist Kenny Griffin will provide some official updates later today but from the forecasts that I’ve looked at this morning we’re expecting anywhere from 2-4" of snow here in the High Country area of Western North Carolina. There are some isolated spots that could see 5-6" of snow tonight through midday on Friday.

The NWS is officially forecasting 1-2" for Boone tonight and another possible 1" on Friday AM. Snow showers are forecasted for Saturday night and again on Tuesday into Wednesday of next week.

More important is the fact that it is forecasted to turn COLD, COLD, COLD this afternoon as the snow moves in and here’s the forecasted temps for the next few days around Banner Elk.

After a brief bluebird day on MLK day, cold invades again Tuesday and into next week with highs in the 20s and lows in the teens. 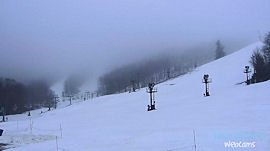 <Winterplace is boasting GREAT SNOW and lots of it, with more natural snow and snowmaking temps on the way!

Looking up and into West Virginia we’re seeing a forecast for Ed Schneider-producing snow videos as 3-5" of snow is forecasted tonight around Snowshoe Mountain. 1-3" more on Friday and snow showers are in their forecast for Saturday and then again next week as well. So Snowshoe could see 8" or more from this next burst of snow. Temps are forecasted to be in the single digits to teens through Sunday night which will produce around-the-clock snowmaking ops for all of the West Virginia and Maryland ski areas.

We can already see Travis up at Winterplace shooting some snow video from the Ghent, WV ski resort.

I was watching WSOC TV last night (out of Charlotte) and they were reporting that businesses were hurting around the regions’s ski areas because of a lack of snow and there is some truth to that. However they also reported that some of the area hotels that they had spoken with were reporting a 90% booked rate around the High Country of North Carolina.

That’s great news to all concerned and this will no doubt be a busy, crowded weekend. All we can tell you is listen to us – there’s PLENTY of SNOW ALREADY on the slopes and for those ski areas that are a little "battle worn" this morning – those will be a faint memory by Friday morning. With temps forecasted to dip into the teens across the mountains tonight – every ski area will be blasting away, creating wonderful corduroy for those skiers and snowboarders that want to get an early start to the MLK weekend Friday morning.

If the natural snow comes in as expected, we should see some pockets of 5-8" of snow to play in as well and that always adds to the excitement when there’s snow on the ground everywhere as well. That should be the case for this weekend and the forecast for next week is looking pretty darn good as well.

So pack your gear and get on up here to your favorite ski hill. There’s GREAT coverage on the slopes and the conditions should be very nice for the weekend.

DO bring your layered clothing and make sure you have good head coverage, gloves and be prepared for some snowmaking ongoing while you’re on the slopes as ski areas need to make snow whenever possible right now.

That’s it from this corner of heaven this morning. See you on the slopes.

You can email me your thoughts, photos, videos and more at [email protected]