The Talk of the Day is of the Approaching BIG SNOW! 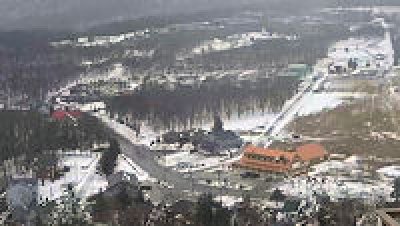 I want to thank all of you who emailed me yesterday and last night about the recent snowfall postings. Thank you…thank you very much… 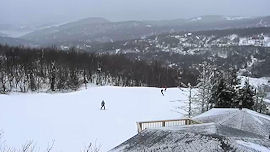 …Beech Mountain is looking AMAZING righ now as this capture from the LIVE SLOPESIDE cam showed at 10am this morning!

Before getting into the big SNOW NEWS…we want to tell you about some great "video" to view. One is over on the www.SkiSoutheast.com/videos.php page where we are showing some video compiled from a combination of input by Ed Schneider from Snowshoe and from some that we took from the Military Appreciation Days at Snowshoe this past weekend. Just watching Uncle Kracker singing from inside what appeared to be a snow globe makes me cold all over again. Check that out. 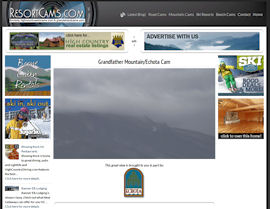 Also Kenny Griffin took THREE new LIVE VIDEO CAMS live on Monday. First is a new webcam up on top of Chalakee (above Foscoe) which is our new Grandfather Mountain Cam. As is ALWAYS the case, when we FIRST put new camera in, you can count on bad weather for a day or so. Right now that cam is pretty clouded over, but on Monday and on subsequent days ahead with all of the snow and blue skies afterward, that Grandfather Mountain Cam will be spectacular. It zooms in to show the perfect (and famous) view of the profile of Grandfather Mountain. Thanks to Mark Harrill and the guys at Echota for partnering with us to make that happen. The old Grandfather view cam was great but it was always obstructed by the lone tree right in the middle of the view. This new one will be sweet when looking at Grandfather during snows, fall colors and with cloud cover draped over "him".

Kenny also implemented two new U.S. Forestry Service cameras…so you'll want to check out all of those and the ski resort cams during Wednesday's snow storm at www.ResortCams.com.

We put a lot of effort into keeping you guys informed. I'm guessing that we will have our hands full keeping up with the snowfall reports that will start coming in later today and this evening. Do me a favor and tweet us at @skisoutheast with your snow totals during the next 24-48 hours. We'd like to get as many reports as possible.

We haven't heard from Meteorologist Brad Panovich just yet as I'm certain he's busy and excited over the impending storm. Areas such as Canaan Valley, Timberline, Wisp and Snowshoe which have all seen as much as TWENTY INCHES of snow since February 27th (see http://data.canaanmtnsnow.com/) could see as much as another FIFTEEN INCHES of snow by late on Wednesday. According to the NWS the forecast for Davis, West Virginia (home to Canaan Valley and Timberline resorts) will see one-half inch of snow today, 6-10" of snow tonight and another 3-5" of snow is expected on Wednesday.

Davis, WV already HAS 18" of snow depth STILL ON THE GROUND after a sunny day and 4" of snow melt on Monday. Friends if you add 15" of snow on top of what they have now, they could see more than a 30" snow pack…and we're talking for cross country skiing, igloo making, snow FAMILY making and more snow fun!  Oh yea, the SLOPES are going to POWDER, POWDER and more POWDER.

Areas like Snowshoe and their 4848' elevations are forecasted for slightly less, but they have been known to beat the forecasted numbers so we'll have to see how that goes, but from the forecasts we've seen, I'd expect another FOOT or more of snow around Snowshoe. When we left there on Sunday there was already a good foot of snow pack off the slopes and nothing but pure pleasure on the slopes. This additional dumping should make for EPIC conditions to be at Snowshoe over the next few days and this weekend.

Wisp Resort in Maryland is forecasted to see perhaps 7-15" of heavy snow in the next 24-30 hours as well…so expect amazing conditions at the Garrett County Maryland ski area. We've been telling you guys for a few years now about Wisp. If you love the mountains, you really need to check out their version of the great outdoors. There's an awesome mix of commercial and backcountry to McHenry, Maryland and those who have followed our lead have given this resort awesome reviews.

YES VIRGINIA…YOU TOO WILL GET HEAVY SNOW! 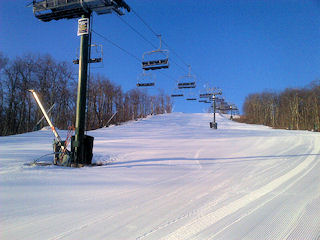 …An amazing shot from early this morning at Wintergreen Resort.

While resorts north and south of Virginia have measured snowfall in FEET this season, the Virginia ski resorts have seen from 8" to 21" on the entire season to date. Wintergreen Resort's 21" leads the way in the state with 14" falling at The Homestead, and 8-9" at Bryce and Massanutten so far this season.

THAT will all change with this approaching system if all goes according to the models. They will start out with some wintry mix today but that should quickly change over to snow tonight with periods of HEAVY SNOW 6-10" tonight and another 3-7" on Wednesday. So with a possible 10-17" of snowfall forecasted, we should see all of the Virginia resort's snowfall totals more than double from this one storm.  VIRGINIA IS FOR SNOW LOVERS…

NORTH CAROLINA MOUNTAINS WILL SEE MORE SNOW…JUST NOT AS MUCH… 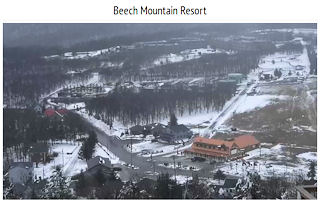 …The image to the right was taken from the LIVE SLOPESIDE CAM this morning showing 3-4" of snow still in the ground with more coming. Visit www.ResortCams.com for more of these!

This approaching system looks to be putting most of the heavier snowfall further north, however with 3-4" still on the ground from last weekend's snows (around the higher elevations of Beech and Sugar) there will no doubt be bunches to play with come Thursday as from 2-4" of new snow should accumulate around most of the WNC mountains with 4-7" possible at the highest elevations.

We're all seeing some underdeveloped snow (rain) right now and that should be the "rule of the day" until things chill down later in the evening.

This strong snow season has fueled record sales for next season’s winter pass. The resort’s Unlimited Pass remains available for $249 through March 31st, and in just the first 10 days on sale, pass sales have already exceeded all of the season passes sold the previous two years combined.  “Conditions are great, the snow continues to fall, and the price is right, so people want to get their pass now, enjoy a great March of skiing and riding, and then be set for next year,” says Frank DeBerry, Snowshoe's President and Chief Operating Officer.

Snowshoe chose the closing date of March 31st in an effort to meet most of the surrounding area Spring Break dates. Starting March 8th, Snowshoe will be hosting the first ever Ballhooter Spring Break Festival – a four-day music and college celebration destined to become an annual tradition. The event features live music nightly on a festival stage in the Snowshoe Village, plus The Ballhooter Beach Party presented by Bacardi, live comedy shows, on-snow games, video contests, race and terrain park competitions, and the first-ever Red Bull DJ Battle at Snowshoe. The resort is offering college students deeply discounted packages on lodging and lift tickets as well.

“We received over three feet of new snow in February,” says DeBerry “And the weather and conditions just keep getting better just in time for late-season deals and specials to keep people from pointing to the beach.”

There you go Frank.

Editor's Note: I thought the deal was so good that I personally bought season passes for next year as it gets you so many additional discounts on the mountain, like 20% lodging; 10-20% off apparel and dining and more.

That's it for me today. Be sure to tweet or email us your snowfall totals from around the area.