THE STORM, THE RESORT OPENINGS, and OH, YEA, IT’S HALLOWEEN! 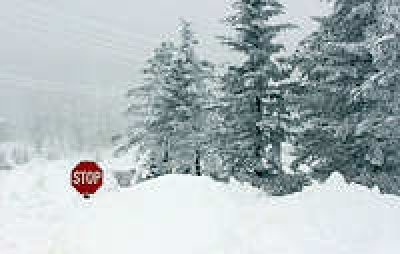 Let’s get right to the most exciting news of the day – Cataloochee Ski Area and Sugar Mountain Resort are BOTH OPEN for skiing and snowboarding today.

Sugar Mountain didn’t report it, but they actually OFFICIALLY picked up another 1.2" of snow in the previous 24 hours to take them to 9.9" of snow from the storm and on the season. That, combined with snowmaking that took place from around 5pm Monday afternoon through this morning has enabled them to open TWO of their slopes from their 3/4 station. They are reporting a base of 16+ inches.

Sugar stated, "We are open for day skiing today, Halloween Day and in our 43 year history, Sugar Mountain Resort’s earliest opening was on November 5th in 1976."

For those of you who can’t read a calendar, that makes THIS their earliest opening day in their history. If you want to BE a part of Sugar Mountain history it will cost you $30 for a full day lift pass and $25 for a half day.

TheKenDog, Kenny Griffin is supposed to be over there at 7:30am this morning and do some first chair pics, video and interviews. We’ll share those with you later today. It should be a great day to be at Sugar for opening day of the 2012-2013 ski and snowboarding season in the Southeast and Mid Atlantic.

NOTE: The Sugar Cams are ALL pretty iced over with a sheet of ice that resulted in the light drizzle that came during one short period late on Tuesday. That quickly transitioned back over to light snow but the cams over there are iced. That should melt off shortly. 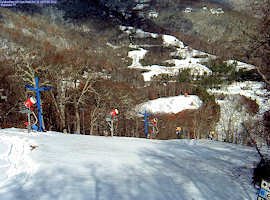 <A view from the top of the lifts this morning at Cataloochee!

Be sure to check out Tammy Brown’s Cataloochee Snowmaking video as they prepared for this morning’s opening. You can view that at www.SkiSoutheast.com/videos.php

Today marks the SECOND time in the last five seasons that the Maggie Valley ski area has been able to open in the month of October. Marketing Director, Tammy Brown said, "We have been making snow round the clock since 6:00 am on Monday, October 29, and we received 4 inches of natural snowfall from Superstorm Sandy."

Cataloochee will operate Wednesday from 9:00am until 4:30pm with skiing on three slopes, Lower Omigosh, Rabbit Hill and Easy Way, serviced by the Omigosh Double Chairlift to midstation and the Easy Way Triple Chairlift. Current base on these slopes is 8-12 inches, with continued snowmaking to increase that number throughout the day and evening. Lift tickets will be a special rate of $25 per person, for all guests. Children 4 and under receive a free lift ticket with a ticketed adult and adults 65 and over, ski free anyday. Regular rental rates will apply. Cataloochee also offers all persons renting equipment a free 1 ½ hour beginner lesson as part of their rental package, any non-holiday Monday through Thursday.

As an added Halloween “treat,” guests purchasing a lift ticket on opening day will have the opportunity to enter a drawing for an all session season pass for the 2012-13 season; value of this pass is $625. Cataloochee will continue to operate on a daily basis for day skiing only, as long as conditions allow. For more information or an up-to-date snow report, please visit their website www.cataloochee.com

OTHER NEWS FROM AROUND THE REGION 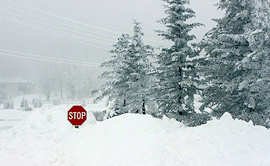 <Photo of Beech Mountain from Tuesday by Amy Morrison, submitted via Twitter

I have had a ton of people asking me about OFFICIAL snow totals from the WV and Garrett County Maryland ski areas. There are TONS of people up there without power and there IS a state of emergency in effect for West Virginia. We’ve placed several calls and although we are getting some emails from Natalie Peintner and Krysty Ronchetti of Snowshoe – they have been pretty vague so far per snowfall. There’s actually SO MUCH snow coming down that they probably can’t give an official count. Snowshoe operates a NWS reporting station there and even over on the official NWS links for snowfall, there is NO REPORT for the last three days! 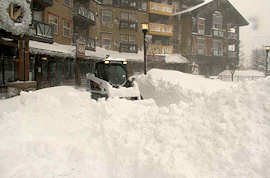 Snowshoe sent this image from in the Village of Snowshoe from Tuesday and two feet more snow was forecasted! >>>

Unofficially I can tell you that Snowshoe, Canaan Valley, Timberline and Wisp ALL had over TWO FEET of snow more than 24 hours ago and up to 24 MORE INCHES was expected to fall…and it’s STILL SNOWING.

Garrett County and Snowshoe have both been all over NBC, Weather Channel and Fox News (Fox News just showed Garrett County Maryland – home to Wisp Resort) and they reported more than 29" of snow.

We will get calls in to these guys and gals – and pics and vids as soon as we can.

I spoke with Christina at Winterplace Resort – the southernmost resort in WV this morning and they are running on generators. There is NO POWER in the area and she reported that the number she’s been hearing the most is 18" of snow!

JUST NOW POSTED FOR SNOWSHOE and the WV Resorts:

A WINTER STORM WARNING FOR HEAVY SNOW MEANS SEVERE WINTER WEATHER CONDITIONS ARE EXPECTED OR OCCURRING. SIGNIFICANT AMOUNTS OF SNOW ARE FORECAST THAT WILL MAKE TRAVEL DANGEROUS. ONLY TRAVEL IN AN EMERGENCY. IF YOU MUST TRAVEL…KEEP AN EXTRA FLASHLIGHT…FOOD… AND WATER IN YOUR VEHICLE IN CASE OF AN EMERGENCY. PLEASE REPORT SNOW ACCUMULATIONS TO THE NATIONAL WEATHER SERVICE BY CALLING TOLL FREE…800-401-9563…WHEN YOU CAN DO SO SAFELY. YOU CAN ALSO REPORT WINTER WEATHER BY POSTING YOUR REPORT TO THE CHARLESTON WEST VIRGINIA NATIONAL WEATHER SERVICE FACEBOOK PAGE… OR BY USING THE TWITTER HASHTAG…NWSRLX. STAY TUNED TO NOAA WEATHER RADIO OR YOUR FAVORITE SOURCE OF WEATHER INFORMATION FOR THE LATEST UPDATES. ADDITIONAL DETAILS CAN ALSO BE FOUND AT WWW.WEATHER.GOV/RLX.

Wisp Resort in Maryland is without power as well, but they are reporting 29" of snow.

Here are some snow totals from across the Southeast and Mid Atlantic ski areas:

Kenny Hess of Massanutten Resort in Virginia shared this bit of insight, "Hurricane Sandy brought snow flurries to upper elevations of the mountain which is a great sign that Winter is coming! We will begin making snow as temperatures allow."

Check out the Massanutten Resort Cam at: http://www.resortcams.com/webcameras-massanutten.php

Numerous reports have been coming out of the Smoky Mountains of Tennessee and reported by television affiliates across the region that Gatlinburg Tennessee has had 18" of snow. While that is TRUE, it is mostly the highest of elevations in the Smokies. Ober Gatlinburg, however has had only 2" of snow from Sandy!

As mentioned before Snowshoe Mountain, The Homestead Resort and the U.S. Forestry Service are ALL adding new cams with us over the next two weeks! Massanutten is adding another one right now!

Snow is STILL FALLING here in the High Country and across the WV and Maryland ski areas. We will keep you updated as we get more to share. Stay tuned right here and if you want the quickest way to get NEW NEWS…join us on Twitter at www.Twitter.com/skisoutheast