The Start of Another Week 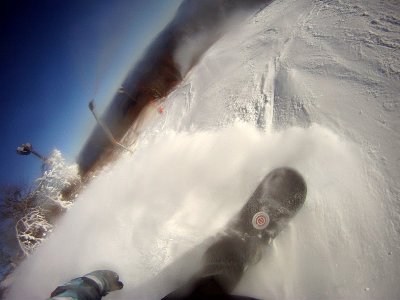 Early in the season, the morning after riding or skiing is a rough one. That applies for me this morning as I am SORE. I just slept for 12 hours (yes I said 12) and I could have kept going I think. It’s a good thing I have a huge cup of coffee sitting beside me right now. Caffeine is a beautiful thing.

Conditions across the region this weekend were pretty decent considering the weather lately and limited snowmaking opportunities. I was at Beech yesterday and it was really fun. It was a bluebird day, with temperatures that were pretty comfortable. I actually had to shed some layers by lunch. Yeah there were snow guns on and yeah conditions were variable to say the least, but I’m not complaining. I had a great time.  I’ve come to expect things like that here in the Southeast, especially so early in the season. It’s just 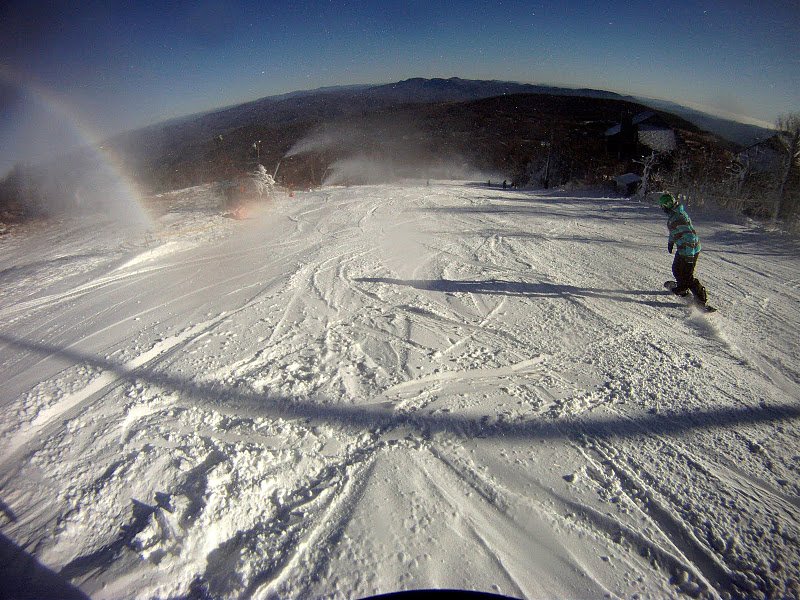 a part of skiing and riding here and you have to get used to it. It really annoys me when I see people on a ski area’s Facebook page or on the messageboard complaining about the snow guns.

<<<< Yesterday was fun at Beech!  Here’s a pic I took early in the morning.  Check out my full trip report over on the messageboard.

Another thing that seems to have upset a lot of people this weekend is that some ski areas are already charging regular season rates while only a fraction of the trails are open right now. Mike kind of alluded to this yesterday and shared some of the backlash he got. Here’s my opinion on it. While I don’t agree with charging full price right now, I also don’t have to pay the bills. I have no idea what it costs to run a ski area, but I’m sure it isn’t cheap. Also, take into consideration that some resorts have had to completely start over multiple times already this season. Cat and Sugar have had to start from scratch at least three times already. Beech pretty much started over again on Wednesday.

Making snow isn’t cheap. The ski areas are private businesses, not public services. Their goal is to turn a profit while also providing a quality product. I think they do a pretty good job a majority of the time. If you don’t want to pay what they are charging, then don’t. It’s pretty simple.

I’m not trying to rant or offend anyone, it just seems like this same stuff comes up every year. Like I said, I don’t agree with the regular rates already in effect, but I wasn’t shocked to hear that they had started.

Let’s get back to actual snow news now! Five ski areas remain open today. They’re the same ones that were open this weekend (App, Cat, Beech, Sugar, Snowshoe). Here’s a quick look at all of them.

Appalachian Ski Mtn – Man, the cam shows some really good looking conditions out there this morning! They have blasted the slopes all weekend. The guns are off now so today should be pretty awesome out there. They have added several additional runs to their list of open trails today. The only two trails not open are Hard Core and Thin Slice. The ATP Facebook page says they have a number of features set up as well. Good stuff! I just called and they will also be open for a night session tonight. Looks like I will be headed out there after work.

Beech – They are once again skiing and riding on 5 of 15 trails serviced by 3 lifts. The grooming looks great out there this morning and the guns are off. There were 5 park features set up yesterday, so I’m guessing it’ll be the same 5 for today. Day session only. Should be a great day up there!

Sugar – They are still open to the top, with 7 slopes open. Things looked really good up there yesterday when I drove by. They are open for night sessions tonight as well.

Cataloochee – Open with 10 trails serviced by 3 lifts. It also looks really nice out there this morning. I don’t see any info about park features but you can see some stuff setup on the right side of the webcam. Should be a fun day up there too! Day session only.

"We had a great opening weekend, expanding terrain daily and enjoying the best riding in the region! The snowmaking and grooming team opened up Skidway today, pushing our available terrain to around 45 acres. Skidway, which will become the Progression Session Park in the future, will be a beginner trail until further expansions are made. Snowmaking occurred overnight and will continue today as long as the weather permits. We’ve been focusing on Gandy Dancer, Moonshine and Stemwinder for opening next. Check back daily for expansion updates. This week looks to bring a wide range of temperatures with nights cold enough for the guns to run. Coming up this weekend, Mountaineer Parks is teaming up with SPY for our first on-snow event, The Early Season Rail Jam! Competition will be held on Skidder Slope with $10 entry, prizes and an awesome after party. Check out our events page or Facebook for more info."

Remember you can check the Ski Report page for a complete list of info for every resort in the region.  See ya tomorrow!