On a number of occasions I have said that I have been in this industry as an employee since 1990 and one of the first people to greet me on my first day of work at Snowshoe Mountain was Rob Mahan. Rob was a young ski instructor and late last week he passed away after a three-year battle with cancer. The industry has lost one of the most energetic instructors ever to come out of the east. 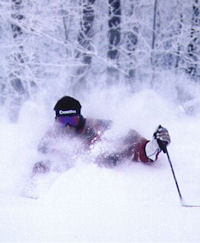 <Rob from 2007 in the deep powder at Snowshoe. (Photo compliments of WV Tourism.)

One of my responsibilities at Snowshoe was to assist with resort photo shoots. You know the photos that you end up seeing on brochures, in ads and on the web.

There was no one better at giving you that smile at the right time than Rob. For those of you who might have traveled through Charleston, West Virginia, in the last decade, the state tourism office would use a photo of Rob on the interstate billboard.

There he was making that sharp turn with a huge smile on his face, selling West Virginia skiing…perfect.

For the last six-years, Rob has been working at Beaver Creek out west, teaching skiing in the Rocky Mountains. Rob, 42, never lost his passion for the sport and was always thinking of ways to get more people involved in having fun on the slopes. 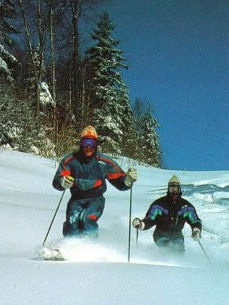 Photo of Ron up front skiing on Shays at Snowshoe several years back. (Photo compliments of WV Tourism.) >>>

My wife Angie said this morning of Rob, a native of Ashland, Kentucky, that he was someone who was able to pursue his passion and make it his profession. Now think about it, how many people can you say that about? Rob was definitely one of those lucky people to succeed in his lifelong adventure. Unfortunately that life was cut short last week. Out there everyone who knew Rob knows he is now enjoying making turns in the clouds and loving every second of it. And to think, his first season, he was a snowboard instructor. Rest In Peace, Rob, may everyday be a blue bird day for you.

LOOKING FORWARD AT THE WEATHER FORECAST,,,

Switching gears 180 degrees to end up this week’s column, I wanted to share some weather info, courtesy of Herb Stevens, The Skiing Weatherman. Here are Herb’s thoughts for the next six weeks.

This has been a highly frustrating season for skiers and riders in the central and southern Appalachians. With cold air intrusions fleeting at best and meaningful natural snow a rare event. This is all consistent with a La Nina winter, but the La Nina is now starting to weaken, and that could have major consequences as far as the weather for the next 4 to 6 weeks is concerned. There are strong indications that a blocking pattern is forming over the high latitudes, and that would support a forecast of colder weather throughout the eastern U.S., with the colder air reaching further down the Appalachians than it has much of this season. Additionally, the southern branch of the jet stream is now starting to perk up, as evidenced by a couple of disturbances that we will see move across Mexico and into the Gulf in the next week. That enhanced southern branch energy ups the ante for snow in the central and southern Appalachians, and should the southern and northern branches phase together, we could see a storm lift out of the Gulf of Mexico and move up the East coast. Should that occur, late season natural snow could give the season a shot in the arm. Overall, the pattern this month and into March looks as though it is going to be more favorable for the central and southern Appalachians than it was in December and January.

Previous Post
A and W Mountain Rentals is Offering AMAZING Lodging Discounts!
Next Post
It’s a Picture Perfect Start to the Week Up at Timberline and Canaan