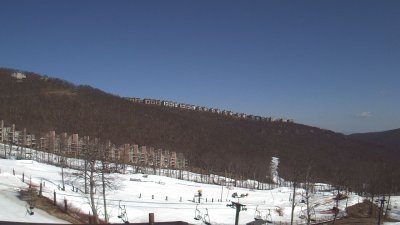 Well this is a first. I've only been doing this for three seasons now but I don't think I've ever done one of these morning articles in April. It's especially a little odd for me because I'm doing it from Lake Norman. I now know how Mike feels when he does it from Watauga Lake on his houseboat. I love the lake.

I'm almost completely in spring mode now. I had my last pow fix of the season last week at Sugar, and now I'm ready for warmer weather and lake time. However, I got pretty stoked yesterday as I was doing my daily scan of the cameras and came across the Snowshoe Shaver's Centre cam. It was snowing and man, did it look good up there! It still does this morning actually. I can't believe they still have 35 trails open on the main portion of the mountain. I really wish I could head up there for their Last Hurrah this weekend. It should be a good time. Click HERE or on the image below to check out the details.

Pond Skimming is a part of the festivites this weekend at Snowshoe!

Also, check out this cool video from Snowshoe's GROM Jam this past weekend. It's pretty awesome to watch the youngsters tackle the boxes and rails. If I ever have a kid, they'll be doing this when they're that age. Too cool.

Don't forget that Snowshoe isn't the only remaining ski area still open. Winterplace and The Homestead are operating today as well. Both are scheduled to close tomorrow but I have a feeling Winterplace might extend their season to the end of the weekend. That's just a hunch though based on the webcam. Dang it looks good out there still. You can see just how much snow is out there by looking at the base depth on the bottom of the image.

Wintergreen will re-open for one final day this Saturday. I'm really, really tempted to head out there with some friends. I've never been there but it looks fun and they'll have a terrain park. The webcam is also showing a lot of snow out there still. So tempting.

I've decided that I'm going to do my own version of The Snowies. Joe Stevens does this every season and posted his most recent one last week. I think I should start my own as well. I don't have a catchy name yet, but if you do then feel free to email me with your ideas. I also have only a few categories. I'll have to work on that. Anyways, here we go.

Best Snow Report – Snowshoe
Mike really likes Timberline's snow report. I think Snowshoe has the best one. They write a little blurb each morning talking about conditions. They have 24, 48, 72, and total season snowfall layed out. They list the current base depth, open lifts, trails, groomed trails, open acreage, surface conditions, and whether or not snowmaking occurred. All of this is on one page and makes it very easy to decipher all of the information. The only thing I think they could do is put the temperature data on there as well. They also update the report promptly each morning. You'd be surprised how some places either do it the night before or wait until mid to late morning to update it. Runner up in this category for me is Winterplace.

Best Webcam – Massanutten
The Massanutten base cam went in sometime in the fall and it's probably my favorite ski cam that we have. It's so high up on a pole that you really do get a bird's eye view of the entire resort. You can see tubing, the terrain park, the beginners slopes, and it even zooms in on the black diamonds. It's awesome. Runner up for this category is the Beech Slopeside cam.

Most Humble Snow Reporting – Canaan Resort
Canaan was way too modest this year when it came to reporting snowfall and base depths. They would consistently underreport natural snow it seemed like and I swear, I don't think their base depth ever changed from the 12-24” figure. Considering that one place in North Carolina was claiming 90+ inches as a base at one point, I think it's pretty easy to assume Canaan had way more than 12-24” throughout January, February, and March.

Most Unique Snowmaking Addition – Ober Gatlinburg
Ober began making “snow” back in September. They added two SnowMagic machines that allowed them to lay down artificial snow in 70 degree weather. Basically, it is a snow cone machine. It payed off as early season temperatures didn't cooperate, yet they were able to open tubing thanks to a couple months of running those machines. They also had some terrain park events before the main mountain opened which was pretty cool of them.

Took the Most Heat – Weathermen
Obviously, I am pretty biased when it comes to talking about this. For some reason, the general public thinks that meteorology is at a point where we can be completely and unequivocally accurate at predicting the weather. That's just not the case. Mountain winter weather forecasting is a huge challenge. Most people hear 6-12” of snow and immediately freak out as they think it's going to snow a foot. When it only snows 6”, they are disappointed and blame the weather guys. Twitter, Facebook, and The Weather Channel just added to the problem this year. Overall, most forecasters, including our own Brad Panovich and Herb Stevens, did a great job this winter. Anyone who says otherwise has no idea about the complexity of the science.  The sign below is so true when it comes to meteorologists. 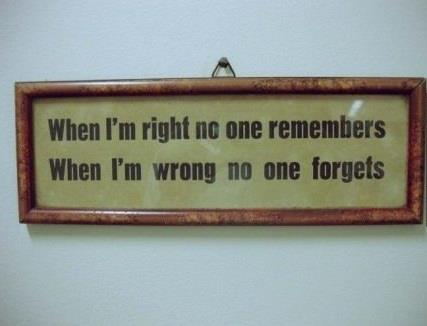 That's it for today. Tune in Thursday for my final First Trax of the season.