The Return of Blue Skies and Sunshine! 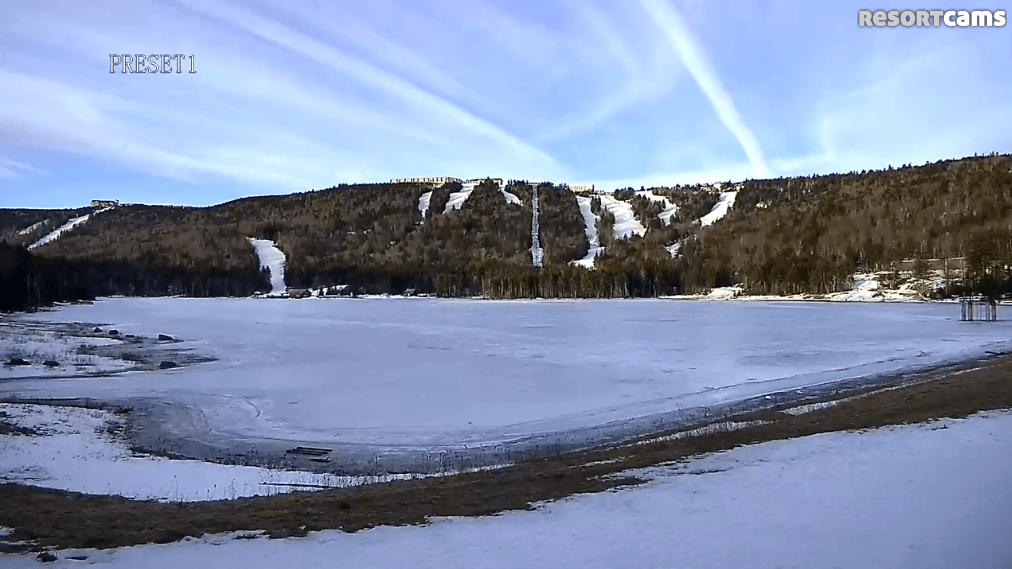 For the first time in several days the sun is out!  Woohoo!  I’m already in a better mood this morning as I’m looking outside my window and I don’t see grey skies and a wet ground.  I did my usual morning webcam roundup and every ski cam I looked at is showing similar conditions as well.  So nice.  Here are a few shots from this morning.  Click each to enlarge. 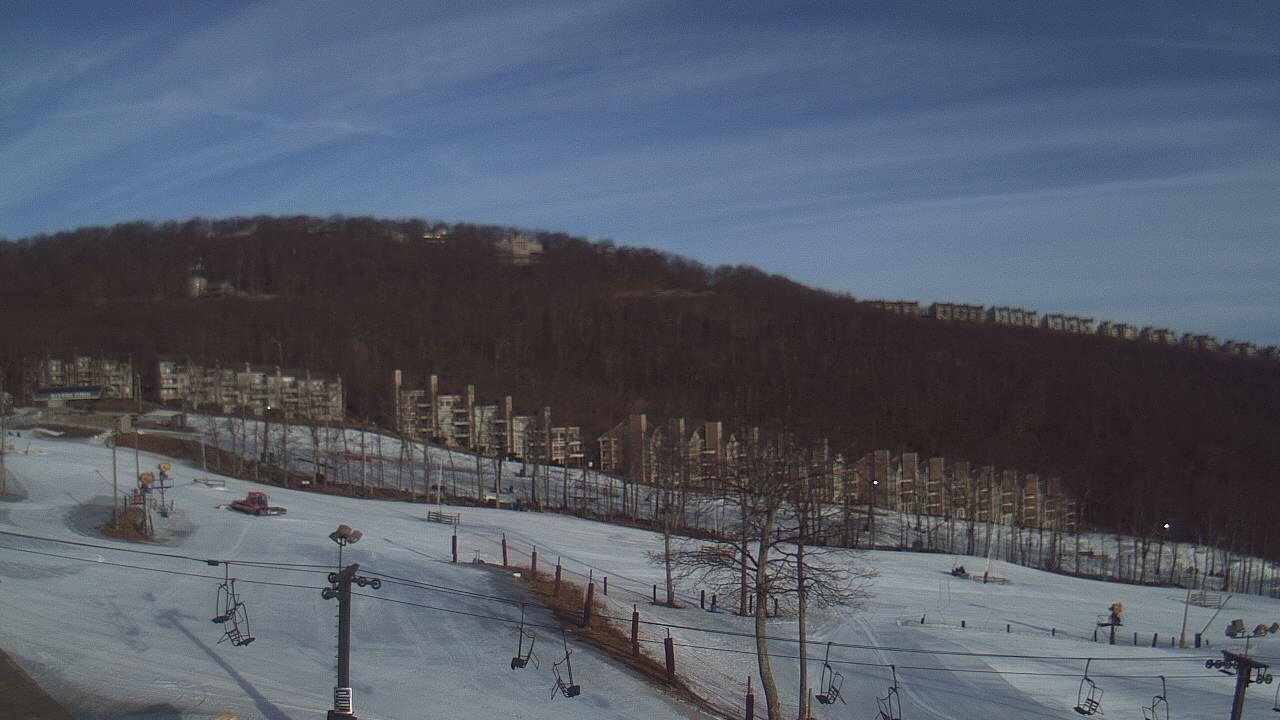 First time with six consecutive days with no snowfall since late October. 7 inches still on ground.

That’s crazy to think that the Canaan area hasn’t gone more than five days without snowfall since October.  That’s five months ago!  I wish that was the norm everywhere.

Those chillier morning temperatures and sunshine should make for a really fun day on the hill.  The snow should be nice and firm this morning, but it will get slushy as the day wears on.  Highs are going to be in the upper 40’s and 50’s across the region.  Today is going to be a textbook spring skiing day.  Should be fun!

Get out and enjoy the beautiful weather today if you can, because tomorrow looks ugly.  The return of clouds, fog, and rain is in our future.  Ugh.  This week of weather has certainly put a large size dent in the bases of some of the resorts.  The snow reports reflect this as they’ve significantly dropped over the past week for the most part.  Cataloochee has probably been the most honest with this as their numbers have declined more than anyone else’s.  I like the honesty though.  Somehow, Sugar’s base went up from 20-78 yesterday to 25-78 today.  Not sure how that happened.  Hopefully it’s a typo.

“Storm of the Century” Anniversary 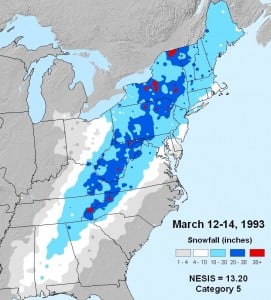 It’s that time of the season, the time when we talk about the anniversary of the Superstorm of 1993.  It’s been 22 years now since the storm dumped several feet of snow across the region.  It’s still remembered to this day and probably will continue to be for a long time.  From a meteorological standpoint, it was historical in magnitude.  We really haven’t seen anything like it since.  You had huge snowfalls, tornadoes, and flooding all in one system.  It was just nuts.

From a skier/snowboarder standpoint, I can’t imagine how epic it was.  I was only 6 at the time and still over a decade away from learning how to snowboard, but I have to believe it produced the best conditions ever for the Southeast.  The phrase “all-time” gets thrown out a lot when it comes to powder, but I’d imagine the Superstorm of 1993 truly was all-time for our region.

Just do a search for Google on the topic and you’ll find tons of info about it.  This exceprt from an NWS overview of the storm gives some good insight into how it played out in North Carolina.

Blizzard conditions prevailed in the western half of the state. Snowfall totals ranged from 2 to 13 inches in the western Piedmont, 15 to 19 inches in the foothills, and from 18 to 24 inches in the valleys to as much as 50 inches atop Mount Mitchell in the mountains. Mountain winds reached 101 mph at Flat Top Mountain east of Asheville. Snow drifts of 8 to 21 feet were reported. At Asheville Airport, winds peaked from the northwest at 48 mph with gusts to 64 mph at 12 noon [1700 UTC] on the 13th .

The major impacts to the western part of the state was from heavy snow accumulation resulting in extensive road blockages, stranded motorists, and in the mountains lost hikers and campers. Strong winds and heavy snow brought down trees, limbs, and power lines leaving many without heat or electricity or telephone service. At one point, Polk County reported 99% of its electrical customers without power. …over 160 thousand people were reported to be snowbound by the storm.

The backlash of the storm brought extremely cold air into North Carolina late on the 13th and lasting through daybreak on the 15th . Wind chill values colder than minus 20 degrees were felt in western North Carolina on the 13th and 14th. Early on the 15th, the temperature bottomed at record setting levels for March with 2 degrees at Asheville … and minus 4 degrees at Waynesville.

Here are some stats about the snow I found from a Weather Channel article from a couple years ago.

I’m pretty sure I’ve posted this video in previous years, but here it is again.  It’s a video from the Boone and Banner Elk immediately following the storm.  It’s 30 minutes long so sit back and relax.

Do you have any cool stories about your experience in the Superstorm of 1993?  If so, email me at [email protected].  I’d love to share some of them tomorrow if possible.  I’m also going to see if Joe Stevens can give me some insight on how it was up at Snowshoe.  I’m sure it was nutso up there as well.