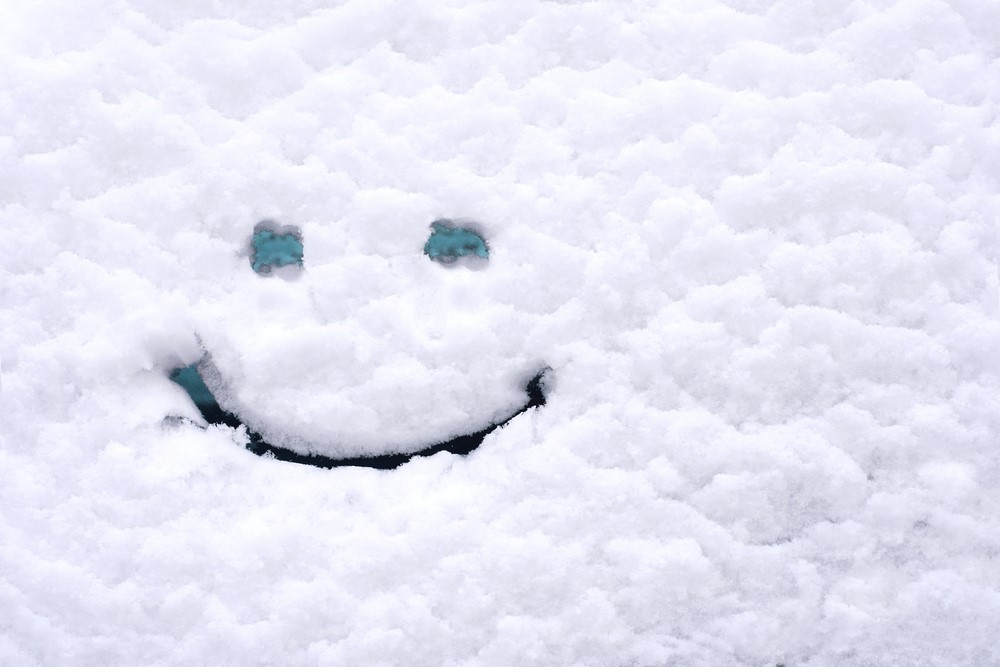 You know those up turns on the edge of your mouth, better known as smiles, come in various shapes and sizes.  But then you already knew that, right.

Where we live in the southwestern portion of West Virginia (between Charleston and Huntington), we were blessed with the first white Christmas in almost a decade.

By the way, I found out something new from the National Weather Service last week as it pertains to what qualifies as a white Christmas.  According to the weather forecasting service, there has to be at least one inch of accumulation by 7 am on Christmas morning for it to be an official white Christmas.  Well here in Scott Depot, West Virginia, we did a lot better than that, as six inches graced our homestead.

I have to admit in my many, many years of having to pay close attention to the weather, I never knew of that interesting weather factoid.

After suffering through a snow drought around these parts last year, it was actually exciting to dust off the snow shovel and get some Christmas morning exercise.  You know one of life’s little pleasures.  Just ask my wife, if you ever meet her, my affection with snow shoveling and snowplows.  That in itself is a story that may be told another day.

If you have been a reader of this column in seasons past, you have read me make mention of the perfect storm.  Well, last week’s snowfall was just that for a number of resorts in the area, as most visitors to the resorts made the Christmas trek either the day before the big day or even two days before, wanting to be at the resort for Christmas morning.  Well, all of that travel occurred before that snowstorm materialized in the region.  That means for the most part, the majority of the travelers, woke up to fresh snow Christmas morning and didn’t have to drive on freshly plowed roads.

Let me stop here for a second to say thank you to all the Department of Highway workers out there in every affected state, as they were out making things safe for everyone on the roads, while most of us were opening presents.  I just hope when they got home, a warm cup of coffee and a nice meal awaited them on their return.  Most of us get caught up in the excitement of a white Christmas and forget about those folks out there on the front lines.  Again, thanks from all us who depend on cleared roads to get to work and most importantly get to having some fun in the winter months.

Now onto those smiles of varying sizes and shapes due to fresh snow.  Even though we were not able to get to any of the nearby slopes to make some Christmas morning turns in the fresh powder that graced the majority of the slopes in the southeast, my son was able to grab his sled and join our neighbors in their yard for some downhill fun.  Of course, that happened after all the presents were open and breakfast was consumed.

My son Christian joined two of our neighbors, ages three and five on their front yard hill.  You see, their hill is steeper than ours and well, they wanted Christian to join them in the snow.  How can you refuse that type of offer?

Even though the water content was minimal, the fresh powder was packable and made the sledding, quite exciting.  Now we aren’t talking about Cupp Run vertical (1500’), but probably more like 30 to 40 feet.  But none the less, that is some downhill fun.  While the temperature was in the mid-teens, when you are winter outdoor lovers, you have the clothes to protect you from, not only rolling in the white snow, but an occasional snowball that heads your way.

So you say, where the heck am I going with all of this rambling about Christmas morning snow and enjoying some outdoor fun.  A quick review class, this week’s column is all about smiles and the various sizes and shapes of those said smiles.

The first distinctive smile I saw that stood out, was the one on the face of three-year old Hudson as he made his way to the top of the hill where everyone was waiting.  Now please understand, Hudson was trucking through snow that made him pick up his short legs and each step was a bit of a chore.  However, the smile on his face made it clear he didn’t care in a least.  All that was on his mind was getting to his destination (top of the hill) and sit in the sled and go down the hill with either his dad or Christian.

As the saying goes, smiles are contagious, and this was definitely the case on this occasion.  You see the smile on Hudson’s face, quickly caused smiles to put up on everyone’s face from his dad’s, to mine, my wife’s, and of course, Christian’s.

Do you ever notice that when you produce a true smile – for the most part you forget about any worries that may be on your mind?  I stepped back and looked around and just stopped to realize it doesn’t really take much to make things all good, for maybe just a short time, but right now during this crazy, challenging time, I’ll take any bit of relief from worrying about what is going on in the real world.

So, after reading this, trying stepping back and think or do something that will make you smile, you will feel the better for it.

That’s it for this week, thanks for joining me for my weekly thought process. Just remember whether it be cold or whether it be warm, we will weather the weather, whatever the weather will be.  I still believe this season is going to be a lot of fun but challenging. Remember, Mother Nature provides the best social distancing these days.

Previous Post
December Keeps on Rolling
Next Post
Ski Southeast Forecast for 12/27/2020: Nice start to the week but some rain could end it.