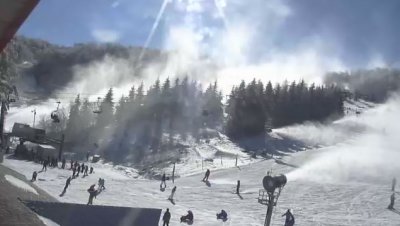 I know it's January 4th already, but this is my first time back on here in a few weeks so Happy Belated New Year!  The first Friday of 2013 is upon us and it looks like the first weekend of the new year holds some stellar skiing and snowboard conditions.  Hoozah!

There's been quite a turnaround in conditions since the last time I wrote the morning article way back in 2012.  Once again, theKENDOG working at Appnet snow jinx was in effect over the Christmas break.  A poor start to the season quickly turned around once Mother Nature realized I was going out of town for the holidays.  I sat in northern Virginia for over a week and watched as three separate snow events transformed the landscape at the ski areas.  I was pretty pissed.  It didn't help that I read Mike's morning reports talking about how bomber it was at Snowshoe.  The only saving grace for me was that I did see a little bit of snow while I was up there.  It was only an inch or so each time but technically I did have a white Christmas as there was still snow on the ground Christmas morning.

I'm back now though and luckily there is still snow…lots of it in fact.  One look around the CAMS this morning and you'll see what I mean.  I woke up to bluebird skies on Sugar Mountain, 18 degree temperatures, and the soothing sound of snow blowers.  Awesome.  It's a gorgeous day up here in the High Country and I'm jealous of GrizzlyEnton who is riding at Beech today. 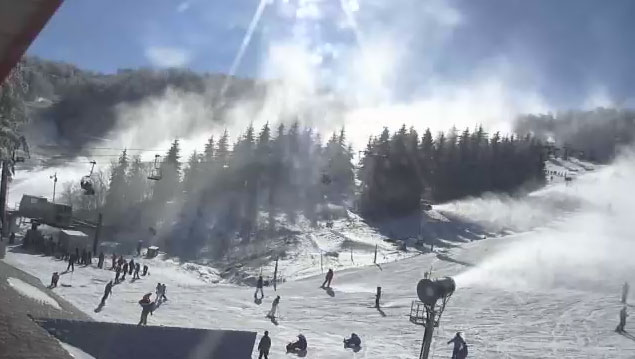 I was actually able to get in some riding last night at Beech.  It was the first time I'd ridden in a month, which is absolutely ludicrous.  I don't think I've ever gone a month in between sessions in season.  My previous gap of that kind was only two weeks.  Luckily, there was no rust and I was having a great time on my new board.  It's always exciting to ride a  new board for the first time!  Anyways, Beech is in pretty good shape right now and there is lots of stuff to play around on.  I like going through the park, but I have so much more fun on natural rollers and bumps.  Take Robbins Run right now and stay on the right side.  You'll see what I mean.

One thing I noticed yesterday and last night too is how many vacationers are still up here.  I guess school is still out in Florida, because every license plate I saw on the way from the office up to Beech yesterday was from there.  It's crazy and at times can be frustrating if you're a local who is driving in a hurry.  However, it's a good thing as it's bringing in money to the ski areas.  Last night was far more crowded than I anticipated.  That said, lift lines were a max wait of maybe five minutes and traffic on the mountain wasn't bad at all.  It was a perfect combination as I'm sure Beech was making money and it wasn't impeding my fun whatsoever.  Good times.

The fun continues this weekend as conditions will continue to be stellar.  Around the clock snowmaking looks to be possible today for the West Virginia and North Carolina ski areas.  I'm stoked to ride at App tonight and Beech tomorrow.  Say hey if you see me!  Anyways, the Virginia resorts get back in on the snowmaking action tonight so if you have plans to get some turns in this weekend, things are looking pretty good wherever you're going, especially Saturday.  Sunday looks to be a little cloudier and light snow showers are possible in West Virginia and northwest North Carolina.  You can't complain about that though!

I'm not going to go over conditions and open trails at each individual resort.  You can head on over to the SKI REPORT page if you want to check those out.  I just glanced at it and I only saw a couple suspect base depth numbers.  I'm really digging the single numbers reported by a few places.  Mike mentioned this the other day and I have to agree with him on it.  Also, you guys will probably think I'm dumb, but I didn't realize that EVERY ski area is currently open.  That's awesome!  I have no idea how this slipped past me, but as I was looking at the page just now, I realized this.  Woops.  Things didn't get good until I was out of town and I admittedly didn't check the ski report page for a couple of weeks.  The season really has made a complete 180 in just a couple of weeks!

While I'm not going to go over the individual numbers and what not, there are a few events going on this weekend that deserve mention.  Here they are:

Appalachian Ski Mountains hosts the first event of the Shred for the Cup Series on Saturday:

App Terrain Park will kick off the 7th Annual Shred for the Cup Series on Saturday January 5 with the Nordica/Never Summer Rail Jam!

The Shred for the Cup series has become the benchmark Park competition series in the region, with 3 events held throughout the winter that test Skiers & Snowboarders skills in several park disciplines (Rail Jam, Big Air, & Slopestyle). As always, the Series has categories for all skill levels (Beginner, Intermediate, Advanded) of both Skiers & Snowboarders, as well as a dedicated women’s category in both Ski & Board.

Winterfest returns to Beech Mountain Resort on January 5 and 6, 2013.  On Saturday, moms get a break with a new event for kids. Snow Day Camp is from 11am to 1pm, offering winter activities for children. Snow Day Camp is $25 and includes ice-skating, face painting, craft making, and lunch.

If you prefer to watch the snow from indoors, an acoustic bluegrass band will be playing in the Beech Tree Bar and Grille during the day. During the session break, Karaoke will be held in the View Haus. Finally, from 7p.m.- 10p.m., BPL will play in the Beech Tree.

Events for Sunday include the annual Cardboard Box Derby. Visual judging begins at 12pm and the Derby race begins at 2pm. The Winterfest Rail Jam kicks off at noon and the Roots Ride Shop Skateboard Competition will start at 3pm.

Welcome to College Daze! The Wailers are playing, Burton Team Rider Gabi Viteri shreds the mountain, a Progression Session Contest is in the works, amazing parties will be everywhere you look and, of course, we have great skiing & riding waiting for you..

Everyone have a good weekend!  Think snow!