The Most Terrain Open of the Season! Lots of Snow and Lots of Fun Await You!

Another 5" of snow fell overnight at several resorts. See where below!

Today there are more trails open than at any time this season – to date at the resorts of the Southeast and Mid Atlantic. It took me a while to compile all the data pertaining to snowfall and base added from snowmaking across the region. Suffice to say that the ski areas took amazing advantage of the frigid temps to make a ton of snow and with some sweet snow maintenance, conditions will be great on the hill today. It will be partly to mostly sunny across most of the region today, with the exception of the West Virginia and Maryland ski areas – which are still under cloudy skies and seeing a bit more snow.

There’s another 1" or so forecasted for up that way. The High Country area around Sugar, Beech and Appalachian picked up the bulk of the snow in North Carolina with 8" or so falling in the last 48 hours, and while it is sunny right now, there is more snow in the forecast for those areas this evening with another 1-3" of snow expected tonight!

This great snow and cold temps could not have happened at a better time as MLK crowds have invaded the ski resorts of the region. As I compiled the data for this morning I couldn’t help but notice that some of the ski areas – specifically those in Virginia and Tennessee are still having to make do with less as only a dusting to flurries of snow fell at those ski areas. At least the temps have dropped cold enough for Wintergreen and Massanutten to make a good base of snow on the terrain they’ve got open. (See details below.)

This season has indeed been one that you can almost track the line where the cold fronts have been allowed to invade as the resorts in Maryland and West Virginia have had the best cold and natural snows to work with and then these systems seem to skip Virginia and Tennessee – and then kind of skirt the most western North Carolina ski areas such that Cataloochee and Wolf Ridge which have only seen 6-8" of snow on the season. Beech Mountain has seen 25" to date and simply have had colder air to work with.

Nevertheless, Cataloochee Ski Area seems to be the ski area this season that has done the most with less than stellar weather to work with as they have a base of 18-50" of snow and all but two of the trails open today. 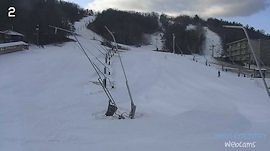 <Bryce Looks Great this Morning Despite less snowmaking, due to borderline temps.

As Joe Stevens predicted the other day, the base depths at several ski areas soared overnight. Of course with temps down in the teens and even colder at some areas – a lot of snow was made. Only Bryce Resort in Virginia looks a little "in need" of more snowmaking on some edges of trails. All in all though even they look great compared to just a few days ago.

The web cams are showing some AWESOME shots and GREAT conditions around the region with plenty of snow on the mountain as 8" of so of snow has fallen at Beech, Snowshoe, Wisp Resort and Timberline & Canaan Valley. Slightly less fell elsewhere. You can scroll on down to get all the "small print details" below.

There’s so much snow on the slopes right now at some ski areas, that they’ve decided to have "mercy" on skiers and snowboarders and shut the guns down for the day.

Appalachian turned their snowmakers off at 10am and will resume making snow after they close tonight.

Cataloochee reported, "We are currently making snow on 100% of the mountain but will not be making snow on the following trails from 8am until 8pm on Saturday: Wolf Creek Hollow, Beginners Luck, Rabbit Hill, Easy Way, Lower Omigosh, and Rock Island Run. We will continue snowmaking on all remaining trails throughout the day on Saturday as long as temperatures allow. Please come prepared with hats and goggles for these types of weather conditions."

The Virginia and Tennessee ski resorts are having the toughest battle thus far this season in terms of snow and cold temps. While 8" fell at several ski areas north and south of them – no snow fell at any of the Virginia ski areas.

While it snowed nearly all day and night last night, only a small amount of additional accumulation was picked up in the last 24 hours at some locations, while the usually snow rich areas like Beech Mountain saw another 4.9" of snow according to the official CoCoRaHs reporting up there.

Many have emailed wanting to know where they can go play in the natural snow. Here’s the accurate snowfall data.

WE’RE MIXING THINGS UP TODAY IN OUR RESORT BY RESORT REPORTING.

Ober Gatlinburg – 24° – Added 8" to their base and now report 10-20" with 5 of 9 trails and tubing open. Don’t forget that Ober has the biggest, baddest ice rink in the region – bar none – complete with restaurants, shops and that awesome aerial tram down to downtown Gatlinburg.

Wisp Resort – 14° – 4" of new snow and 6" from the 48 hour storm. Wisp is reporting an average base of 15" but we can tell you that there are mounds of deep snow at the Deep Creek Lake ski resort. We’d love to be hanging at Wisp this weekend as they have 21 of 32 trails open, ice skating, snow tubing and their sweet mountain coaster.

Snowshoe Mountain – 7° – They have powder conditions today with 44 trails of 60 open and tubing and several terrain parks open as well as snowmobiling, cat tours and more. Snowshoe picked up another 5" of snow in the last 24 hours and that is 10" in the last 48. Mark Glickman posted, "Hello snow! An additional 5" fell in the last 24 hours and it is still coming down, which will make for some amazing skiing & riding this holiday weekend. More snow is in the forecast through Sunday with 1" of accumulation predicted today. We have 155 acres of terrain available at the Snowshoe and Silver Creek areas including the infamous Cupp Run and night skiing at Silver Creek!"

Timberline Resort – 8° – Reporting a base of 48" and Powder conditions after 8.2" of snow in the last 48 hours. Tom Blanzy and his peeps have 22 of 40 trails open and plenty of backcountry trails open for snowshoeing or cross country skiing. Check out the slopes at: http://www.highcountrywebcams.com/webcameras_timberline.htm

Winterplace Resort – 14° – They’ve seen 7" of snow in the last 48 hours and with great snowmaking as well, Winterplace is looking SWEET! They have 20 of 27 trails open and the terrain park will have a late opening today. Tubing is open as well! Check out the snow at Winterplace! http://www.highcountrywebcams.com/webcameras_winterplace.htm

Bryce Resort – 28° – Grew base to 22-52" and they have 7 of 8 trails open and tubing as well. They are reporting no new snow from this last system. All except "Hangover" is open on the mountain and their LIVE webcam is showing good snow conditions! Check that out at: http://www.highcountrywebcams.com/webcameras_BryceResort.htm

Massanutten Resort – 18° – Grew base to 24-36" and now they have 7 of 14 trails open. Diamond Jim, Upper Showtime and the CMB Terrain Park are now open. They are also Making snow on ParaDice. The tubing hill is open and the slopes look great! They are making snow on selected terrain today. See: http://www.highcountrywebcams.com/webcameras_massanutten.htm

The Homestead – We’ve not been getting any reports from these guys, but according to Marketing Director, Matt Fussell that could be changing. We hope to give you guys some great news from this great Virginia resort very soon.

Appalachian Ski Mountain – 14° – Grew 10" of base overnight to 48-76" – 9 of 12 trails open. They are reshaping the AppalJam Terrain Park and have yet to open Hard Core and Thin Slice. Some people have emailed me asking why those two trails are not open yet although App has so much base. The answer is really quite simple. App caters mostly to families and the less-experienced skier and just ten days ago things were pretty thin on the hill. Now that they’ve been able to build so much base, they’ll get those opened rather quickly now. Appalachian has made so much snow in the last few days that they will turn their snowmaking equipment off at 10am this morning which means that there will be wonderful conditions for skiing and riding today!

Beech Mountain Resort – 8° – Beech is reporting 3" of additional snow but the official snow reporter from up there is showing another 4.9" of snow and 8" from the storm. Beech grew their base by 4" according to their report and have 11 of 15 trails open and ice skating as well. White Lightning and The Oz Run are among the trails not available for this weekend.

Sapphire Valley – 16° – 48-66" base and both trails are open from 9am-9pm today as is their Frozen Falls Tubing Park. It’s good to see Sapphire open this weekend.

Sugar Mountain – 9.8° – They grew their base by 8" and picked up 2" of new snow. Sugar did a small "course correction" and they are now reporting 6" of snow in the last 48 hours which jives with our on-snow reporters and the CoCoRaHs guys up on top of Sugar. Sugar has near perfect conditions on the mountain today with a base of 14-44" and 15 of 20 trails open as well as ice skating and tubing. Tom Terrific, one of their black diamond slopes is open! Sugar Slalom is open as well as Zoom Yang. Live bluegrass music today from 4 to 6 pm in the cafeteria.

Previous Post
It Was a Mini Powder Day at Snowshoe!
Next Post
Eight to Ten Inches of Snow Has Fallen at Our Area’s Ski Resorts in the Last 48 Hours! This is a shot of deer grazing on Beech Mountain on Friday!