The Morning After the Best Weekend of the Season Thus Far

Well, what a fantastic MLK weekend it appears to have been at the ski areas across the region! I think everyone is in agreement that the best conditions we’ve had so far this season were this weekend. It couldn’t have come at a better time either, as I’m sure many vacationers were relieved to find an abundance of snow when they arrived to their destination. It seems we finally caught a break for once this year!

I haven’t got the numbers on me right this second, but I believe anywhere from six to twelve-ish inches of snow fell at the ski areas from Thursday night through Sunday. Interestingly enough, if I’m not mistaken I believe Beech and Sugar here in NC might have seen the most of any resort in the region over the weekend. Don’t quote me on that though, I could be wrong.

As good as this weekend was, I think the bad weather so far this year definitely deterred some folks from making the trip to the mountains. I was scoping out the web cams throughout the day on Saturday and Sunday, and I am almost positive that it did not look as busy as the past two MLK weekends. That said, the crowds were still pretty huge. My buddies told me the lift line at Beech on Sunday was a 45 minute wait. I was out there yesterday and it wasn’t quite that bad, but it was still a pretty decent wait nonetheless. I didn’t think it would be all that crowded as I assumed most people would be heading home. That’s the main reason I waited until Monday to go riding. I couldn’t have been more wrong. I guess a lot of folks wanted to stick around and ride the great snow conditions while they could!

It seems as if a large group of people on the messageboard also made it out to get some turns in this weekend. There were several TR’s from all over the region. There are the usual resorts (Beech, Snowshoe) that I see trip reports from consistently, but in addition to those we had some people posting pics from Ober Gatlinburg in Tennessee, Massanutten in Virginia, and even Cloudmont in Alabama. It’s not too often that we see trip reports from just about every state in the region with a ski area (minus Maryland). Good job people! 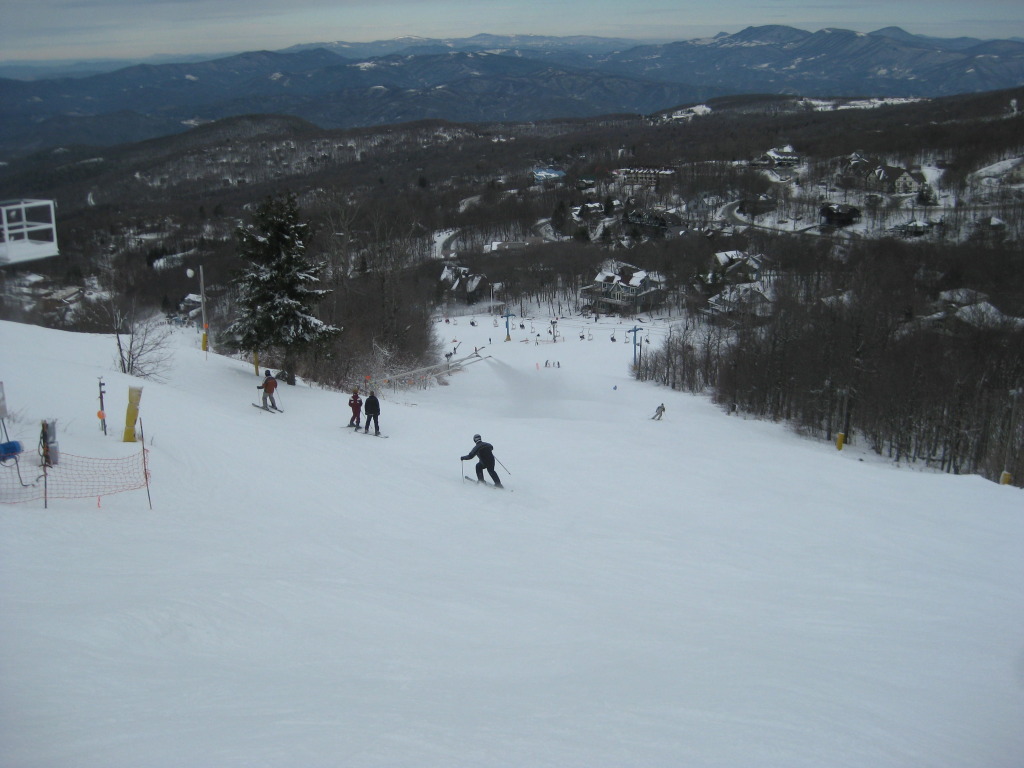 Frances Miller (skipink) snapped this pic at Beech yesterday.  As she says, "The snow was fabulous packed powder."  I can tell you firsthand that conditions are pretty excellent out there right now! Click HERE for her entire trip report. 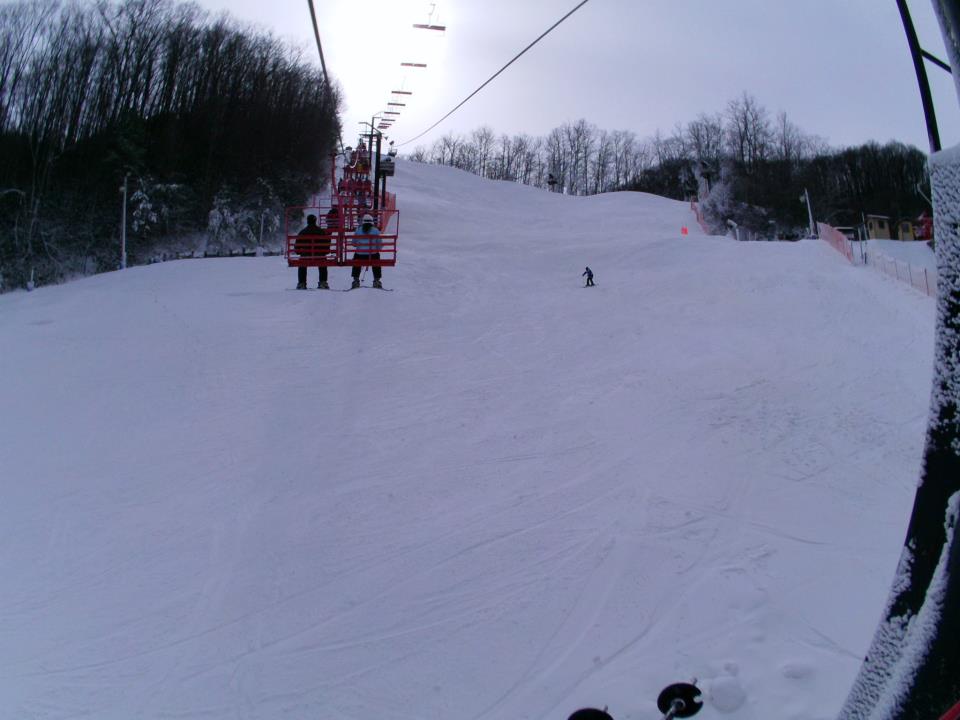 Swamphox posted this image from Ober Gatlinburg in Tennessee on Saturday.  Coverage looks pretty great out there as well!  Go HERE for his entire trip report. 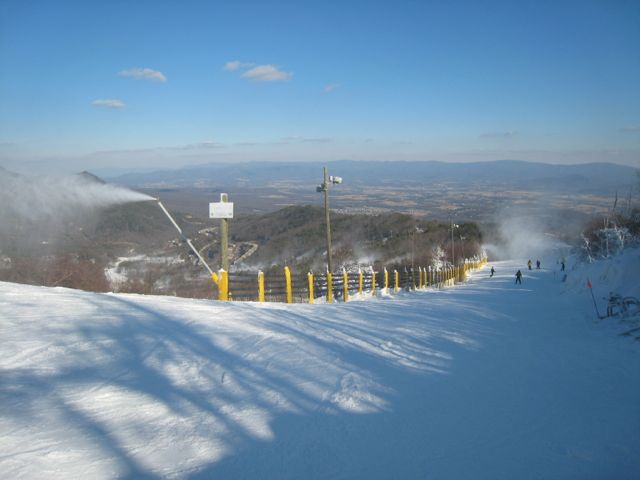 Marzski was up in Virginia at Massanutten over the weekend.  As she says, "Great conditions in the mornings…….Had a blast! Will be back next weekend."  Check out her full trip report HERE. 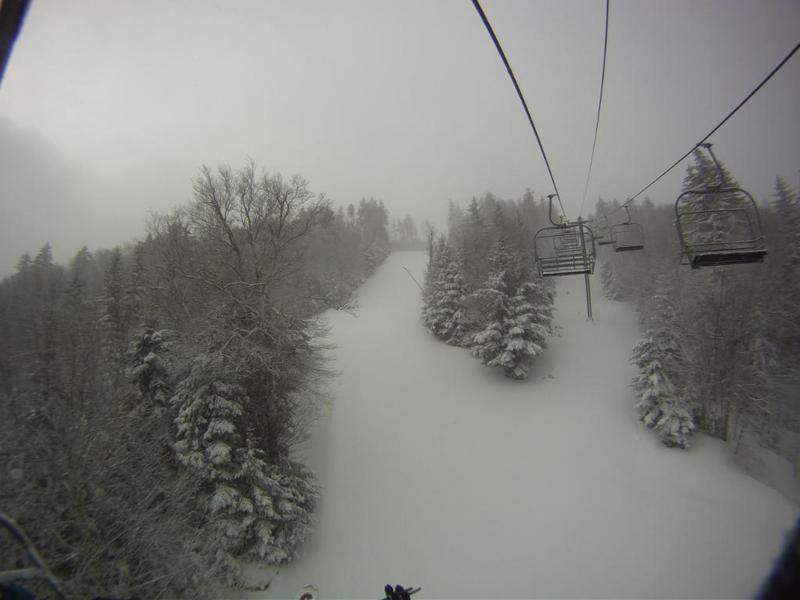 Messageboard brookbarrel snapped this photo from Snowshoe on Friday.  "Today was easily the best snow I’ve seen out here all season."  He posted a few videos from Saturday and Sunday as well.  Go HERE for his TR.  This guy is a powderhound! 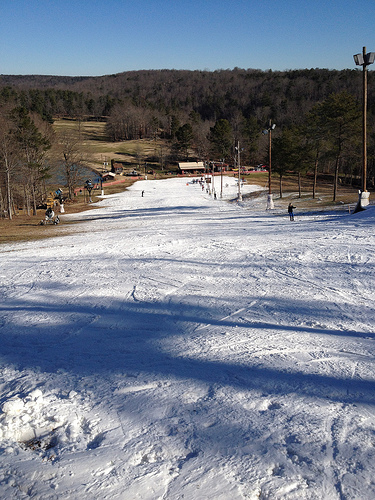 Even folks in Alabama were able to ski this weekend!  Cloudmont opened to the delight of many of the Bama folks on the messageboard.  Although the Mont is small in size and vert, messageboard member Droogie seems to have had a great time based on his TRIP REPORT.

Like I said, it is pretty safe to assume that this weekend was easily the best of the season thus far. Conditions remain pretty dang good today and will continue to be that way this week. This is the first time all season that I’ve been able to say that we have a few ski areas that are 100% open. Appalachian Ski Mountain, Cataloochee, and Bryce Resort are all 100% open this morning. Depending on the weather, I might head out to App tonight to see how things are.

Speaking of the weather, it looks like today we will have to get through a quick shot of underdeveloped snow. I’m looking at the radar right now and there are some showers that we’ll have to deal with today. For once, temperatures across the region are fairly uniform this morning. Several mornings last week and the week before saw temps in North Carolina and West Virginia differ by a good 20-25 degrees. This morning though, that difference is in general only about 7-8 degrees as temps are ranging from the upper 30’s to mid 40’s.

The good news is that temperatures become much colder once again tonight as a cold front will move through. Here in NC, we could see a dusting or so overnight. Nothing real significant is expected. Up into northern West Virginia and Maryland though, they could see another 1-3 inches overnight.

Everyone will see colder temps return though, so snowmaking should commence once again tonight. In general, the rest of the work week looks to be cold. Overnight snowmaking looks to be a good bet, and some resorts will be able to make snow during the day as well. So look for conditions to improve even more over the next several days. As the for the weekend, that’s another story…we’ll talk more about that later this week.

That’s all for today. As always, head on over to the ski report page for a detailed list of open trails, lifts, etc. See ya tomorrow!